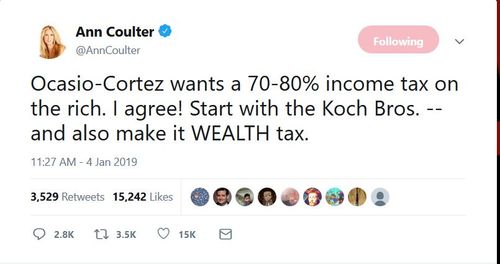 In recent weeks, Ann Coulter and Elizabeth Warren both endorsed the idea of asset taxation directed at immigration promoting billionaires. [Warren’s tax proposal aims at assets of wealthiest Americans,  by Sahil Kapur and Laura Davison, Bloomberg News, January 25 2019] Ann Coulter did so first and may have accelerated the announcement from Warren’s team.

Ocasio-Cortez wants a 70-80% income tax on the rich. I agree! Start with the Koch Bros. -- and also make it WEALTH tax.

In 2015, I published a plan for much more aggressive use of asset taxation than Warren is now calling for. However, my plan also had some careful protections built in. Asset taxation is a potentially very powerful tool which I think history shows must be used very carefully—it's the  economic equivalent of a chainsaw.

I'm sure Coulter had much more to do with Warren’s announcement than anything I  did. There is just no way that Elizabeth Warren wants to be outflanked on the left by Ann Coulter. I don't know if Ann read my 2015 article (Progressive Perspective: As An Immigration Patriot, I Preferred The Old Wealth-Tax Trump, October 30, 2015)  I would love to hear from her by email [randall_burns@yahoo.com] and will help further if I can.  I have not seen any other articles that connects the growth of high -end asset levels to loose immigration policies, and shows how asset taxation may be a useful tool to fight it.

I have refined my analysis a bit since 2015.

The great George Borjas of Harvard University estimated that total return on investment for employers from loose immigration practices was  $437B in 2010 [ Immigration and the American Worker, CIS, April 2013]. If we convert that into an asset with 2.88%/year inflation adjusted return, we get  $15.174T which accounts for much of the increased wealth of the 1% from 1983-2010.

Borjas’ analysis needs to be extended cover other costs of mass immigration, like ncreased need for infrastructure investments, external costs like health care  and insurance costs and increases in housing costs. I think it may also need to be adjusted further to account for difficulties young have getting entry-level jobs because of US immigration policies. Still, it is a defensible lower-bound estimate of the cost of recent immigration policies on working Americans.

However,  that needs to be offset  by a $150 billion increase in foreign ownership of US assets that is not easily explained by reinvestment of profits or asset appreciation.  An estimate of the portion of the trade deficit which is not reinvested profits in the US is $350 Billion.

It seems that corporate welfare from bad trade deals was less than that generated by bad immigration policies. This runs counter to the well-established Left dogma which is that there is a huge problem with trade and nothing is going on with immigration.

Both were less than the $1.3 Trillion governmental deficit in 2010. however, that really needs to be adjusted for new infrastructure investment and the costs of expanding social services, infrastructure and education associated with the growth of the post-1965 related population. Even if some of those folks are nominally citizens, the investment required by their presence needs to be counted as a cost of immigration. Much of the reason for decaying US infrastructure is that the new US population is not collectively paying their way—at least in the short term. That is means diversion of funds that would otherwise be used for infrastructure maintenance is necessary. This is not an indictment of those immigrants, but of careless immigration decisions made by American political leaders driven by the donations of the wealthy.

The intent of my original proposal  was to create a situation where collective enrichment of the 1% was impossible without collective enrichment of Americans of  lower net worth. That would seriously take much of the wind out the sails of this modern plutocracy-driven immigration hysteria. I am very grateful for Warren and Coulter looking at this issue. Warren’s immigration record  is hopelessly naive.

However, even Warren's limited support on this issue is still important—and Ann Coulter and VDARE.com came first.

I think we owe a lot to Ann on this and I would love Ann’s help pressing Warren to go further.