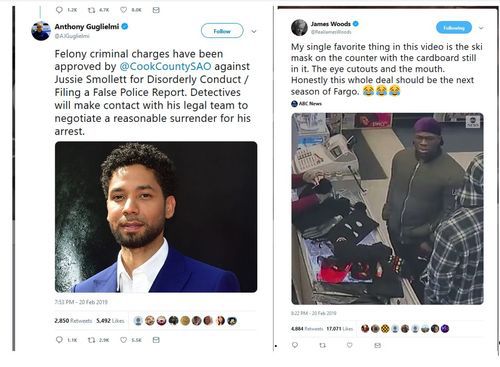 "Tom Wolfe! Thou Shouldst be Living at This Hour"

My single favorite thing in this video is the ski mask on the counter with the cardboard still in it. The eye cutouts and the mouth. Honestly this whole deal should be the next season of Fargo. 😂😂😂 pic.twitter.com/QeqMTBvUub

To paraphrase Wordsworth on Milton:

“Tom Wolfe! thou shouldst be living at this hour”

Something overlooked in Wolfe’s reputation as an heir to depressives like Swift and Waugh as a mordant satirist is his sheer comic high spirits. The Nigerian bodybuilder bros would have cracked him up.

Felony criminal charges have been approved by @CookCountySAO against Jussie Smollett for Disorderly Conduct / Filing a False Police Report. Detectives will make contact with his legal team to negotiate a reasonable surrender for his arrest. pic.twitter.com/LvBSYE2kVj