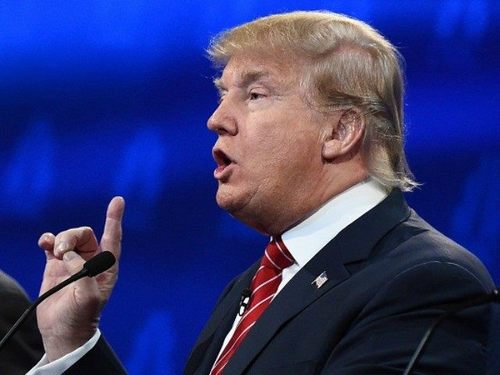 Progressive Perspective: As An Immigration Patriot, I Preferred The Old Wealth-Tax Trump

In the cage match that was the CNBC Republican debate, Donald Trump was attacked on his tax plan. Rather than responding directly, he skillfully appealed to the authority of CNBC supply-side pundit Larry Kudlow, who has called Trump’s plan “spot on” and said he was “honored” to be mentioned as a supporter [Exclusive—Larry Kudlow on Donald Trump’s Corporate Tax Plan: He’s ‘Spot On’ by Matthew Boyle, Breitbart, October 28, 2015]. Trump may have defanged much of the GOP Establishment with his tax plan, even as he continues to maintain he is sticking it to the donor class and hedge fund managers. But, as a progressive who believes in the need for patriotic immigration reform, I think Trump should have stuck with his previous proposal for a one-time tax on the wealthy—and built a movement which could actually humble those forces that benefit from cheap labor and mass immigration.

In his 2000 book The America We Deserve, Donald Trump outlined a plan for eliminating the United States National Debt—a onetime 14% wealth tax on all personal assets over $10 million spread over up to 10 years (or 1.4% per year).

This is a plan with a long history. It would have appealed to the legendary populist Huey Long. Ralph Nader endorsed a similar concept in an interview with Pat Buchanan [Ralph Nader, conservatively speaking, The American Conservative, June 21, 2004]. Jewish immigrant entrepreneur Sol Price, who developed the “warehouse store” concept that culminated in Costco, advocated the same thing [Sol Price, by Robert Price, San Diego History Center, 2012].

And perhaps the idea’s earliest champion was the most popular economics author in history: Henry George. Though best known for his advocacy of Land Value Taxation, George felt concentrations of assets that get exceptional returns because of their sheer size or their source in monopolies contained what he called "spurious capital". According to this theory, those excess returns above what other investors get were something that could be taxed without causing reductions in economic output because owners could not pass new costs onto the consumer.

In economics, what is old is new again. Ed Wolff of NYU, MIT's Matt Rognlie, and media superstar Thomas Piketty of France have revived research and media interest on the problems of wealth concentration.

However, one of the important factors in this process goes all but unmentioned—immigration. Piketty does mention immigration as being a factor making growing inequality politically acceptable [Piketty on immigration, The Globalist, December 1, 2014]. However, he seems largely oblivious to the “trickle up” effects of mass immigration because of the resulting reduction in labor costs.

Indeed, there’s a trifecta of policies leading to mass inequality and concentration of wealth:

By 2009, there were $55 trillion in household assets. This suggests a growth in household assets in current dollars or $44 trillion between 1965 and 2009. However, in that period you had over $30 trillion of apparent growth that was not generated by market forces. Instead, you had an ostensible growth of “assets” but it often was just a government transfer of what had once been broadly held or public assets to the rich.

This broke down in three ways.

The asset value of immigration rights is my 2005 estimated value of citizenship adjusted for inflation to $247,160 2009 dollars multiplied by the number of new citizens and permanent residents created by post 1965 immigration and 2009. (I took US Census figures on population and the Pew estimate that 55% of population growth is from immigration [Pew Institute, Immigration's Impact on Past and Future US Population Change]).

The bulk of the income created by immigration goes to the immigrants themselves. The additional growth in asset value comes from reduced labor costs, which increase the value of businesses and property [Immigration and the American Worker, by George Borjas, Center for Immigration Studies, April 2013]. Borjas estimated the increased profits to users of immigrant labor at $437 billion / year.

Companies use bad trade deals to substitute foreign workers for US workers at reduced prices and increased profits and stock values. Wage levels made less of a contribution to the value of citizenship rights and the wealth of the 1% increased. Taxing at lower rates because of deficit spending means increased value of businesses and real estate, but does little to improve the negotiating position of workers.

Much of the growth in assets among the rich that cannot be explained by direct governmental action can be explained by accumulated interest on such income or capital gains.

If we adjust for cost of living and inflation, the value of assets held by the bottom 95% of the people in this country has not increased. Despite ups and downs in the years since 1965, the change in median net worth is essentially nil [The Median Net Worth of US Households Over Time Has Gone Nowhere, Financial Samurai, Accessed October 15, 2015]. The portion of Americans with zero or negative net worth has also been growing [About half of America has zero net wealth, by Noel King, Marketplace, April 21, 2014].

Immigration patriots who express concern about declining wages and living standards in the country must also confront the resulting inequality. And this is a problem that is getting worse. This table shows just how fast the wealth of the very rich has been growing since 1986 and how growth of assets increases with size of fortunes. Data in the table below are taken from Gabriel Zucman’s studies [Gabriel Zucman, UC Berkeley, Accessed October 15, 2015]

(All figures are in thousands of dollars based on 2010 values. Growth is compounded annually after inflation.)

With the kind of “trickle up” economy we now have in place, Trump's initially-proposed 1.4% annual flat asset tax would still permit even many of those in the fabled 1% to grow their assets each year. And since the assets for the top 0.1% of Americans are 5.4% compounded annually after inflation, the amount of their assets these most privileged would have to pay under Trump's “draconian” flat tax is essentially equal to the rates upper middle class families often pay.

So what is the solution? In my opinion. Franklin D. Roosevelt made a mistake by focusing on income taxes rather than asset taxes.

And ironically, Republicans, in their pursuit of flat taxes with low exemptions, are still perpetuating this effort. For example, Michele Bachmann argued that “everyone” should pay taxes as a kind of basic civic duty [Bachmann: Everybody should pay taxes, by Jonathan Weisman, Wall Street Journal, July 21, 2011].

But as we can see with the figures above, present trends are leading us towards a new form of a centrally-controlled economy, where the CEOs, some managers of major financial institutions and those who inherit wealth will simply constitute a new nomenklatura distributing wealth from the top down.

My solution: progressively tax the upper 1% at a level sufficient to prevent future increases in their assets beyond inflation. The next 9% should have their assets taxed at a level to limit their asset growth to that of median assets for the country at large.

As this tax would be focused on wealth and not income, it would not jeopardize economic growth and would generate sufficient income to fund infrastructure and basic social programs. What’s more, the federal income tax and FICA payroll taxes could plausibly be eliminated, which would solidify current property values and increase asset tax revenues.

The wealthy tend to advocate lax immigration because they gain more from asset appreciation than they lose in reduced wages. We can change that anti-social pro-immigration behavior by moving from income taxes to a tax on concentrated asset growth. In doing so, we would create a more equal America, where fewer people have zero assets, median assets grow more rapidly and the financial position of almost every aspect of the bottom 95% improves.

Randall Burns is a graduate of the University of Chicago Department of Economics where his professors included Maynard Krueger  and Arcadius Kahan.  He worked for years in the tech industry and helped with an early database integration for what eventually became the world’s most popular credit card fraud detection system.  He was the DBA supporting a team of auditors working on the investigation of  convicted felon Bill Griffin, former CEO of a major insurance company.  He was a volunteer for the 1976 Carter campaign. In 1990, he published “Rx for the Environment and the Economy” in the Oregon Peaceworker, which proposed a revenue neutral tax shift to pollution taxes.  An  initiative advocating similar policies will be on the ballot in 2016 in Washington State. In 2004, he helped write the Kucinich Campaign’s statement on Guest Worker Visas.