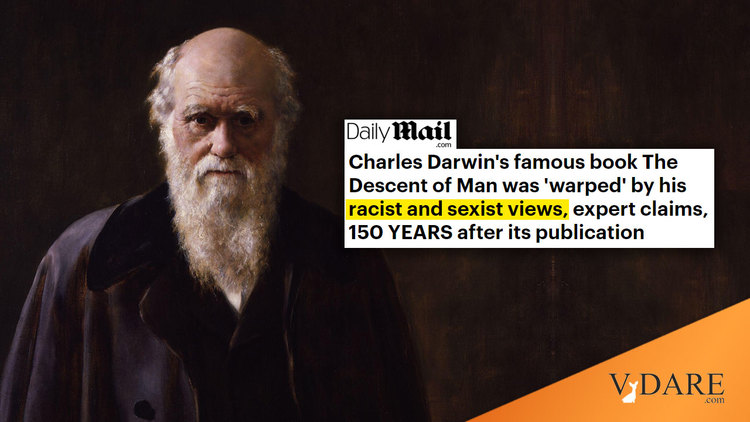 And Then They Came For Darwin ...

Charles Darwin’s famous book The Descent of Man was ‘warped’ by his racist and sexist views, expert claims, 150 YEARS after its publication

Charles Darwin published his book The Descent of Man on February 24, 1871

An anthropologist said the thinking is presented through racism and sexism

Charles Darwin’s book ‘The Descent of Man’ was warped by his racist and sexist views, according to an expert reviewing the work 150 years after its publication.

Published on February 24, 1871, The Descent of Man is one of the most influential works ever written on the theory of evolution and natural selection.

‘Like so many of the scientific tomes of Darwin’s day’ the book ‘offers a racist and sexist view of humanity,’ says Princeton University anthropologist Agustín Fuentes.

Agustin Fuentes [Email him/Tweet him] is about as white as Charles Darwin.

Writing in Science, Fuentes accuses the famed British naturalist of letting racism, sexism and misogyny ‘warp’ the scientific process and influence his findings.

The article accuses Darwin of being ‘dangerously wrong’ on a number of assertions made in the 150-year-old book, including presenting his data through a cloud of racism and sexism that suggest women and non-white people are ‘less than’.

When it came to people from Africa, Darwin consistently referred to them as ‘cognitively depauperate, less capable, and of a lower rank than other races.’ ..

Darwin wrote in The Descent of Man: ‘The belief that there exists in man some close relationship between the size of the brain and the development of the intellectual faculties is supported by the comparison of skulls of savage and civilized races, of ancient and modern people, and by the analogy of the whole vertebrate series.’

As well as describing non-white men as ‘less than,’ Darwin also used natural selection to place women lower in rank than white men.

‘He described man as more courageous, energetic, inventive, and intelligent, invoking natural and sexual selection as justification, despite the lack of concrete data and biological assessment.

‘His adamant assertions about the centrality of male agency and the passivity of the female in evolutionary processes, for humans and across the animal world, resonate with both Victorian and contemporary misogyny.’

It’s almost if the example of Charles Darwin supports the stereotype of white males as being more likely to come up with great scientific theories than black females.