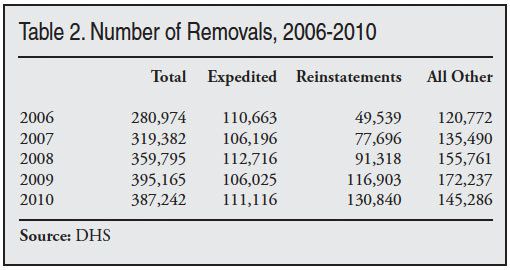 America Doesn't Have A "Broken Immigration System", It Has A Broken Deportation System

How Immigration Enforcement Works (or Doesn't) in Real Life

By W.D. Reasoner July 2011 Backgrounders and Reports Download a pdf of this Backgrounder W.D. Reasoner (a pseudonym) is a retired government employee with many years of experience in immigration administration, law enforcement, and national security matters.

Many people, including, surprisingly, those whose occupations might bring them into contact with federal officers who enforce immigration laws,1 don't seem to have a clear notion of how removal proceedings2 against an alien take place, and exactly what "due process" means in that context. For instance, state and local police and prosecutors often do not charge or will move to dismiss charges against an alien, once Immigration and Customs Enforcement (ICE) officers or agents express interest in removal, in the mistaken belief that once ICE takes custody of the individual, he (or she) will be forthwith whisked to a bus, plane, or train, and unceremoniously shoved across the border or dropped into the midst of his (or her) country of origin. Such notions are greatly mistaken. This Backgrounder describes the enforcement actions that take place prior to, and that result in initiation of, removal proceedings, one form of which is a hearing before an immigration judge.3 It spells out the cumbersome and dysfunctional process and also includes a set of recommendations to improve the system, all of which can be accomplished with the agency's regulatory process, without the need for legislative action.[More]