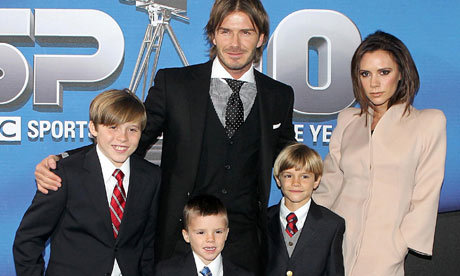 Guardian: The Beckhams have too many children

The Guardian takes time out from whooping the anti-Murdoch brouhaha to address today's most pressing issue:

Beckhams a 'bad example' for families

With a fourth child, the couple have joined the ranks of the irresponsible, population experts say 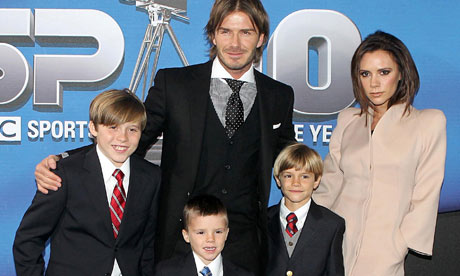 David and Victoria Beckham may have been overjoyed to welcome their new daughter, Harper Seven, last week but, according to a growing group of campaigners, the birth of their fourth child make the couple bad role models and environmentally irresponsible.

Background for non-Brits: David Beckham was the most famous soccer player of a decade ago. Victoria Beckham was Posh Spice in the Spice Girls. In celebrity wattage, they are roughly the British equivalent of Brad Pitt and Angelina Jolie (although, in contrast, they are married). In an increasingly chavified England, they are the chief exemplars of the old English idea that celebrities should dress elegantly and often rather formally. (I would guess, off the top of my head, that Mrs. Beckham, who had previously given her husband three sons, wanted to keep having children until she had a daughter to dress up, a common maternal desire.) Beckham's jersey number is 7, hence the middle name.

They appear to be healthy, good-looking, extremely rich, focused (Beckham, for instance is a good but not great natural athlete — instead, through practice, he made himself the best in the world at bending free kicks [Bend It Like Beckham], a skill rather like a top golfer's), relatively tasteful (by the standards of footballers and pop stars), and have managed to live in the center of the British tabloid maelstrom for quite a few years with only a moderate number of scandals and without melting down under the stress. In other words, they are likely to have, on average, pretty good genes. The fact that they have been making copies of those genes does not strike me as an occasion for fear and loathing.

As the world's population is due to hit seven billion at some point in the next few days, there is an increasing call for the UK to open a public debate about how many children people have.

Now the Green MP, Caroline Lucas, has joined other leading environmentalists in calling for the smashing of what TV zoologist Sir David Attenborough has called the "absurd taboo" in discussing family size in the UK.

Lucas said: "We need to have a far greater public debate about population, whether it focuses on improving family planning or reducing global inequality - and looking again at how we address the strain on our natural resources. The absence of an open and honest discussion about this issue means most people don't give much thought to the scale of global population growth in recent years. In 1930, just one or two generations ago, the world's population stood at around two billion. Today it is around seven billion, and by 2050 it is projected to rise by a third to 9 billion.

"We live as if we have three planets instead of just one. It is interesting that public figures, environmental groups and NGOs in general have tended to steer away from population to the extent that it's become a taboo issue. The horrific consequences of China's one-child policy and of other draconian efforts to regulate procreation have, for many, rendered discussion of the subject completely unpalatable. Yet as long as an issue remains a taboo subject where no one talks about it, then there's very little chance of finding the solutions we need."

It is a view that is being pushed by the UK-based Optimum Population Trust, whose chief executive, Simon Ross, is calling for the government to tackle the UK's high rates of accidental pregnancy and to give child benefits and tax credits only for the first two children.

Because the Beckhams would clearly have had fewer children without the tax breaks.

"That would send a clear signal that the government will support sustainable families, but after that you are on your own," he said. "There is a big issue there, family planning is cheap, yet many people don't use it properly and accidental pregnancy rates are very high. We need to change the incentives to make the environmental case that one or two children are fine but three or four are just being selfish.

"The Beckhams, and others like London mayor Boris Johnson, are very bad role models with their large families. There's no point in people trying to reduce their carbon emissions and then increasing them 100% by having another child," he said. "England is one of the most densely populated countries in the world and the fastest-growing in population terms in Europe. In 15 years we'll have an extra 10 million people here."

And that is the fault of the Beckhams and the Johnsons? In reality, the cause of Britain's population growth is the I-word that is missing from this article. When poor people move from a poor country to a rich country, one of two things, basically, can happen. Either they assimilate economically, and thus emit more carbon, or they fail to assimilate economically.

Attenborough has attacked the last two UN climate summits in Cancún and Copenhagen for ducking the population issue. Giving the President's Lecture at the Royal Society of Arts in March, he made a passionate speech about how the world's baby-making was damaging the planet and called for every country to have a population policy. "The sooner we stabilise our numbers the sooner we stop running up the down escalator," he said.

"Fifty years ago there were about 3 billion people on Earth. Now there are almost 7 billion - almost double - and every one of them needing space. There cannot be more people on this Earth than can be fed."

The population debate has often been overshadowed by what is seen as the disastrous and often inhumane experiment by China, with its notorious one-child policy, and with sensitivity about being seen to criticise birthrates in underdeveloped countries. But campaigners point to the fact that it is the populations of the developed world who use the vast majority of the world's resources.

Lucas said the Green party was not afraid to raise the subject because it was "fundamental" to wellbeing. "The lesson to be learned from China is surely that efforts to curb population growth in a way that restricts individual liberty are dangerous and come at huge human cost," she said. "Policies that focus on increasing access to birth control for all who want it, reducing poverty and inequality, improving food security and tackling environmental degradation are where we should be focusing our attention.

I suspect the Beckhams have adequate access to birth control. In 2010, I called for one of the 10,000 foreign non-governmental charitable organizations operating in Haiti to announce a policy of making Depo-Provera contraceptive shots available for free to any Haitian woman who so requests. This suggestion did not sweep the media.