Sixty Minutes reported in 2009 that Medicare fraud was “A $60 Billion Crime”. The segment didn’t exactly mention the diversity/immigration aspect, but did observe, “If you want to find Medicare fraud, the first place you should look is South Florida.” Hint, hint.

South Florida was poisoned 30 years ago by the Mariel Boatlift, which allowed Fidel Castro to rid Cuba of thousands of criminals when President Jimmy Carter welcomed the worst of Cuban society. So the nice American city of Miami was transformed over a few months into a Spanish-speaking, foreign, more criminal place.

In addition, Cubans brought the practice of slaughtering other people’s horses (to eat!) to South Florida.

Does anyone in bankrupt Washington care about mega medical fraud? Or is $60 billion in theft too small-fry to get the attention of Beltway brains?

Anyway, the FBI has been trying to chase down some of the worst offenders, who can easily avoid capture by escaping to Cuba. But it’s worse than that: there are indications that the Cuban government is willing to welcome big-money Medicare fraudsters, providing they pay a nice fee to the ruling commie criminals.

Below, Cuban “expatriates” residing in Miami show their loyalty to their home country. 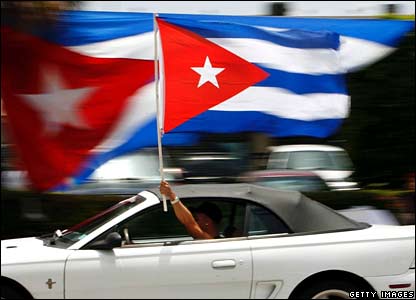 South Florida is known as the capital of Medicare fraud, but increasingly Cuba is where the scammers go to avoid prosecution.

As Medicare crime spreads across South Florida, accused scammers are escaping in droves to Cuba and other Latin American countries to avoid prosecution — with more than 150 fugitives now wanted for stealing hundreds of millions of dollars from the U.S. healthcare program, according to the FBI and court records.

The tally of fugitives charged with healthcare fraud here has tripled since 2008, when The Miami Herald first reported on the phenomenon of Cuban immigrants joining the Medicare rackets and fleeing to evade trial in Miami.

But during the past three years, the FBI has captured only 16 fugitives, reflecting the difficulty in catching Spanish-speaking suspects who head south to hide out. Most of the fugitives were born in Cuba, immigrated to South Florida after 1990 and can easily live under the radar in Latin America with hundreds of thousands or millions in taxpayer dollars fleeced from Medicare.

Even if fugitives can be located in Cuba, there’s no way to get them back because of the political realities at play.

“They go to Cuba so they can’t be caught,” said Rolando Betancourt, a longtime Miami bail bondsman who has tracked one Medicare fugitive to Havana. “You can find anybody in Cuba; you just can’t arrest them.”

Because so many of the Medicare defendants are Cuban, rumors have swirled for years that the Castro government has purposely trained and deployed immigrants to take over Medicare-licensed clinics in South Florida, and then harbored them after they returned home. But federal agents and prosecutors, while privately speculating about an official Cuba connection, say they’ve never uncovered evidence linking Fidel and Raul Castro’s regime to the rampant healthcare fraud on this side of the Florida Straits.

Moreover, the feds have made no official attempts to seek extradition of fugitives in Cuba, mainly because the United States has no formal relations with the government. Agents have captured some Cuban fugitives returning from the island as they travel through Miami International Airport.

Repeated calls and emails seeking comment from the Cuban Interests Section in Washington, D.C., were not returned.

Earlier this year, a University of Miami report quoted a former Cuban intelligence official who suggested there were “strong indications” his government was either facilitating the Medicare fraud or providing safe harbor for fugitives in exchange for hard U.S. currency. But the report provided no examples.

Soon afterward, U.S. Sen. Charles Grassley, R-Iowa, a Medicare watchdog for years, questioned Health and Human Services officials at a congressional hearing about the possible Cuban government link after the department’s inspector general posted a “Most Wanted” list of Medicare fugitives, and seven of the top 10 were Cuban.

Cuba watchers, legal experts and others who have witnessed South Florida’s ascendance as the nation’s Medicare fraud capital say the Cuban government’s involvement would not be that far fetched — though they have no proof to back it up.

“It wouldn’t surprise me if one day that is proven to be a fact,” said Miami attorney Sam Rabin. One of his clients, Eduardo Moreno, fled to Cuba after posting a $450,000 bond in 2007 on healthcare fraud charges. He had collected $2 million from Medicare on bogus claims for medical equipment and HIV services.

“I think it would be very hard for someone with millions in currency to stay under the radar in Cuba” without that government’s protection, Rabin added.

Andy Gomez, a senior fellow at the University of Miami’s Institute for Cuban and Cuban-American Studies, said he has heard from sources in Miami and Cuba allegations that the Castro government extorts Medicare bounty from criminals who are allowed to go back and forth between here and the island nation. But he said he knows of no evidence directly implicating the Castro regime in the fraud.

James Cason, who served as chief of the U.S. Interests Section in Havana from 2002-2005, said he was not aware of the fugitive phenomenon during his tenure, but noted that relaxed travel restrictions in recent years have enabled Cubans to fly more easily between Havana and Miami. He said it’s highly probable that the Cuban government shakes down Medicare fraud fugitives, but doubts its direct involvement in the healthcare scams.

Cason called the Medicare offenders “scammers, not revolutionaries,” saying the FBI should try to work with the Justice and State departments to engage Cuba in extraditing some of the fugitives.

“The Cuban government will investigate if they think it’s in their interest,” he said. “But I bet the FBI hasn’t asked them.”

Officials for the FBI and Justice declined to comment. A spokesman for the State Department also declined to comment on Medicare fraud fugitives, but said that the federal government has sought the extradition of fugitives in Cuba wanted for other serious crimes.

Four years ago, Eduardo Moreno, the Miami-Dade man who had collected $2 million from the government program and fled back to Cuba, became the poster boy for Medicare fraud fugitives. The feds featured him in a news conference with a “Most Wanted” mug shot along with a photo of his $200,000 Rolls-Royce Phantom.

Moreno, who bail bondsman Betancourt believes is running a Havana disc jockey business for clubs, weddings and other events, is among 54 fugitives identified by the FBI who collectively submitted at least $545 million in fraudulent bills to the Medicare program in the last six years, according to federal court and other records.

From those claims, Medicare paid the fugitives a total of $218 million, records show.

An additional 102 defendants have been charged with Medicare fraud under sealed indictments, but the FBI has been unable to arrest them because they have fled South Florida or the country.

The U.S. attorney’s office keeps the suspects’ names under wraps so they won’t know that they’ve been charged — sometimes leading to fortuitous situations when the defendant reenters the United States and gets arrested.

The FBI says the 156 Medicare fraud fugitives from Miami-Dade and other parts of South Florida comprise the majority of fugitives charged with ripping off the program nationwide.

Still, since 2008, the FBI has struggled to capture Medicare fraud fugitives, especially those who flee abroad. Of the 54 named fugitives, 26 are believed to be in Cuba and the rest in Mexico, the Dominican Republic and other Latin American countries.

The bureau, working from 2008 to 2011 with foreign governments except Cuba, captured and arrested 16 fugitives charged with pocketing $83 million from Medicare. Of those, four were known to have fled to Cuba and were apprehended when they returned via Miami International Airport.

FBI agents and federal prosecutors say several factors have fueled the fugitive trend. One is sheer volume: Since 2006, the U.S. attorney’s office in Miami has prosecuted about 1,200 defendants on Medicare fraud charges, accounting for one-third of all such cases in the country.

Also, federal judges have issued much tougher sentences, with the average prison term ranging from five to 15 years. Last month, a physician convicted of writing phony prescriptions for unnecessary HIV therapy was sentenced to 20 years.

Another influential factor: In 2008, Chief U.S. District Judge Federico Moreno of Miami, troubled by the rising tide of fugitives — including some with bonds who fled the country after being convicted — advised his fellow judges to set higher bail for Medicare-fraud offenders.

“They realized that although it’s a white-collar crime, there’s still a risk of flight,” said FBI special agent Bryan Piper.

Also at play: The lure of a quick and easy buck for new Cuban arrivals. Some established clinic operators recruit the Cuban migrants to pose as “straw owners” of their Medicare businesses to protect the real owners’ identities. Then, the migrants are sent back to the island with a pocket full of cash as part of the deal.

The leader of one $100 million HIV-clinic scam in Miami-Dade and other parts of the Southeast admitted that he recruited three Cubans “with the understanding that the ’straw’ owners would flee to Cuba to avoid law enforcement detection or capture,” according to court records.

Michel De Jesus Huarte pleaded guilty in 2009 to fraud charges and was sentenced to 22 years in prison. His accused recruits — Orlin Tamayo Quinonez, Juan Carralero and Madelin Barbara Machado — are suspected of having fled to Cuba, the FBI says.

Huarte’s accused business partner, Ramon Fonseca, is believed to be in Venezuela.

The Miami FBI’s toughest case involves the Benitez brothers — Jose, Luis and Carlos — who owned and operated a dozen HIV-therapy clinics in Miami-Dade. They allegedly filed $119 million in false claims with Medicare, raking in a whopping $84 million.

The Cuban-born brothers, who fled to the Dominican Republic before being indicted in May 2008, are accused of funneling millions through sham companies to finance their purchase of luxury toys and properties in that country.

Their acquisitions included homes, motels, apartments, land, cars, boats, horses, a helicopter, a distribution plant leased to Coca-Cola, and a hotel flanked by water- and dinosaur-theme parks, all in the areas of Punta Cana, Bavaro, Higüey and the capital, Santo Domingo.

“They became little entrepreneurs with their Medicare money,” said FBI special agent Ellen Lapp, adding that Dominican authorities have helped the United States seize the Benitezes’ properties so they can be sold by the Marshals Service to pay back the Medicare program.

In an unusual twist, the brothers, naturalized U.S. citizens, were jailed after arriving in Cuba in April 2008, according to the FBI. The Cuban government is still detaining them, though it is not clear why.

To help catch fugitives, the FBI sometimes issues “red notices” through Interpol to alert foreign authorities to stop suspects traveling while on the lam. The red notices are distributed at airports and other travel sites.

Fugitive Fermin Rey, who fled Miami after posting a $100,000 bond in 2007, was accused of pocketing $2.8 million from bogus Medicare bills for aerosol medications and other equipment. In November 2009, Rey, posing as a businessman, traveled from Ecuador to Mexico.

Mexican authorities, who had received a red notice for him , sent him back to Ecuador, where he fought his extradition but lost.

Lapp and Piper, the FBI agents, flew there to pick him up in a 12-hour whirlwind trip.

Rey was convicted and sentenced to eight years for Medicare fraud — plus about a year for fleeing.