Affirmative Action Police Hiring, As Covered By The WASHINGTON POST

In his piece on the Chandra Levy fiasco, Nicholas Stix quoted John Lott's 2000 work on affirmative action in police hiring, in which a 1989 drive to hire more black cops in DC led to hiring black criminals, and putting them in blue uniforms. The ones who were honest tended to be incompetent:

Indeed, some shocking reports have been made about the importance of cognitive skills. Expressing concerns about the poor English skills of new police recruits, a Washington Post editorial [1993] claimed that “between 1986 and 1990, 311 of the 938 murder cases the D.C. police brought to the U.S. attorney’s office—roughly a third—were dismissed…. One local prosecutor says many D.C. cases were thrown out because prosecutors couldn’t read or understand the arrest reports [written by the police].”

Ann Coulter referenced this in 2014 when people were complaining that there were too many white people on the Ferguson Police Force, writing

If the Ferguson police are forced to hire more minorities and women for the sake of diversity, the one thing we can be sure of is that more black people will be murdered, raped and assaulted.

Someone’s got to say it, so it might as well be me: I’m against more black people being murdered, raped and assaulted.

In a massive, detailed 2000 study of the effect of court-ordered affirmative action plans on police departments, economist John Lott found that the more minorities on a police force, the higher the rates of murder, manslaughter, violent crime, robbery and aggravated assault will be. Violent crime increased by a minimum of 3.3 percent every year after affirmative action policies went into effect—and the spike in crime was highest in black neighborhoods.

With the MSM fixated on fixing the two most pressing problems in the known universe, the low percentage of black officers on the Ferguson, MO police department and the lack of black dominance of Ferguson’s machinery of government, it’s worth looking at some history:

And this is the story he linked to was  D.C. Police Paying for Hiring Binge, by Keith A Harriston and Mary  Pat Flaherty, August 28, 1994, which started with an anecdote about an R Street Crew gang member who got arrested for dealing and his acceptance letter from the police academy the same day, and included details like this:

An investigation by The Washington Post found that graduates in those two years alone, who make up about one-third of the force, account for:

More than half of the 201 D.C. police officers arrested since 1989 on charges ranging from shoplifting and forgery to rape and murder. Some have been arrested more than once and in more than one year.

More than half of those involved in departmental disciplinary proceedings for breaches such as neglecting duty, making false statements and failing to obey orders, which have doubled since 1989.

Half of those on a list of 185 D.C. officers so tainted by their own criminal problems that prosecutors won't put them on a witness stand as officers of the law.

That investigation revealed a system that in 20 months of haste to meet a congressional deadline brought on board 1,471 officers – 40 percent of the force at the time – in a way that hardly provided the best selection of recruits or adequate training for even the most trusted, committed and hardworking in the classes.

Critical background checks on applicants were cut short, and investigators scrimped on visits to neighborhoods and interviews with former employers. Physical examinations were hurried, and some people who failed to meet minimum requirements were hired anyway. The psychological services unit, which had rejected one in five applicants in other years, rejected just one in 20.

During the peak recruiting time, 1,000 people took the police exam each month, and 60 percent of them passed. An additional 1,500 a month signed up for the police cadet program. The department wound up taking one in four comers, Police Chief Fred Thomas said, far more than the one in 12 hired during the early 1980s, and well above the national police average of one in 10.

Class after class of recruits was rushed through cramped academy classrooms, sometimes with outdated materials, and sent to patrol city streets scared and unprepared. Some rookies did not even know the proper way to handcuff suspects.

They were trained haphazardly as investigators, barely coached on the basics of writing up cases and conducting themselves properly on the witness stand. Prosecutors complain that far too many of them still fall far short in providing the basic police work needed to win a conviction.

Less than a generation ago, the D.C. police department was a national model, flush with federal demonstration dollars and lauded as one of the first in the nation to put female officers on patrol. Officials won praise for the department's handling of massive protests against the war in Vietnam and crises such as the takeover of three city buildings by a group of Hanafi Muslims in 1977.

But among the current generation of D.C. officers – armed and given authority to make life and death decisions – there are those who have raped and those who have beaten and stolen – from strangers and from each other. There are more than a few whose sense of right and wrong is so tied to a time clock that they say they can't understand why they should be punished or fired for wrongs they commit off duty. 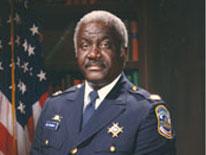 Nowhere in this article is the word "black" mentioned. All this crime, all these criminals, Marion Barry as Mayor and DC police chief Isaac Fulwood Jr. (right) hiring these people, and nobody at the Washington Post noticed what color any of them where.

Have any lessons been learned? Not by politicians. The image at the top of this page: "This trooper graduated with the most diverse, least background-checked class in the history of the New Jersey State Troopers" is not from 1989—it's from 2016.