Good news is hard to come by these days in the twisted world of diversity, but the following story is a genuine smile-maker. Advertisers have been pulling out of the obnoxious Islam propaganda show “All-American Muslim” which is broadcast on The Learning Channel (TLC) as a result of objections from viewers. (See my earlier remarks Dearbornistan Muslims Get Their Own Cable TV Show.)

The liberal media has swallowed whole the Islamic pose of victimhood, despite years of religion-based terror attacks, honor killings, direct declarations of hostility toward Western values and the frightening effects of decades of Muslim immigration in Europe. The TLC example represents an escalation in America of propaganda efforts.

But even the powerful media machine cannot cover up evil entirely, try though it may. The frequent murders and terror attacks in the name of Allah become hard to disguise after a while.

In the case of the TLC divers-a-thon, viewers responded negatively to what was clearly a biased account of Muslims residing in America that could have come from the Riyadh desk of CAIR.

Helpfully, the Florida Family Association sent members and friends an explanatory article about the show and asked them to contact sponsors with words of disapproval, which appears to have had the desired effect.

Below, TLC has portrayed Muslims residing in America as wholesome, cheerful and very concerned with hijab styles. 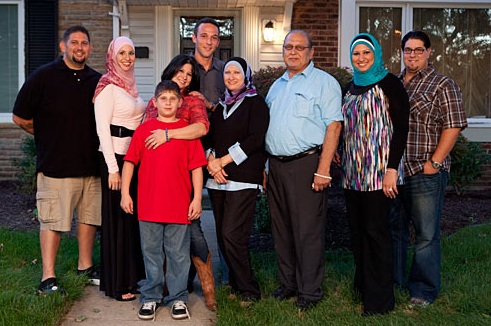 “All-American Muslim,” a new program on The Learning Channel that is being touted as a “powerful series” that carries viewers “inside the rarely seen world of American Muslims,” is being dropped by advertisers.

Critics say the program is nothing more than video jihad propaganda, and the Florida Family Association says it is contacting companies whose advertising appears on the show to ask them to quit. So far, 18 of 20 companies contacted have done so, the group said.

The organization said that among the companies that initially supported the program, but later did not have any advertising aired, were Airborne Vitamin, Amway, Diamond Foods, Dyson Vacuum, Estee Lauder, HTC Phones, Home Depot, McDonald’s, Petsmart, Pfizer, Sears, Sonic, T-Mobil and Wal-Mart.

The Florida group said it sent out an email alert to constituents only a week ago, who then contacted the sponsors.

“The Learning Channel’s new show ‘All-American Muslim’ is propaganda clearly designed to counter legitimate and present-day concerns about many Muslims who are advancing Islamic fundamentalism and Shariah law,” the organization’s report on its work said. “The show profiles only Muslims that appear to be ordinary folks while excluding many Islamic believers whose agenda poses a clear and present danger to liberties and traditional values that the majority of Americans cherish.”

The association cited a “troubling scene” in which a Muslim police officer stated, “I really am American. No ifs, ands or buts about it.”

“This scene would appear to be damage control for the Dearborn [Mich.] police who have arrested numerous Christians including several former Muslims for peacefully preaching Christianity,” the association report said.

The association’s suggested message from consumers to sponsors said the show is trying to manipulate Americans into ignoring the threat of jihad and Shariah, which is Islamic religious law.

The report said Dearborn, the site of the biggest mosque in North America, is one of the most densely populated Muslim communities in the United States. In recent years, it has gained national attention for taking a pro-Muslim stance and for the arrest and intimidation of Christian evangelists for engaging in protected speech activity, the report said.

The Thomas More Law Center, a national public interest law firm, has handled several legal disputes over the arrests of those individuals.

“But Americans aren’t suspicious of Muslims who are trying to get married, open clubs, and play football. Americans are suspicious of Muslims who are trying to blow up American buildings, subvert American freedoms, and assert the primacy of Islamic law over American law. The problem people have with Islam is not with every Muslim person. It is with Islam’s teachings of violence against and the subjugation of unbelievers. It is with the supremacist ideology and the fervent believers in those noxious doctrines of warfare and subjugation,” the report said….