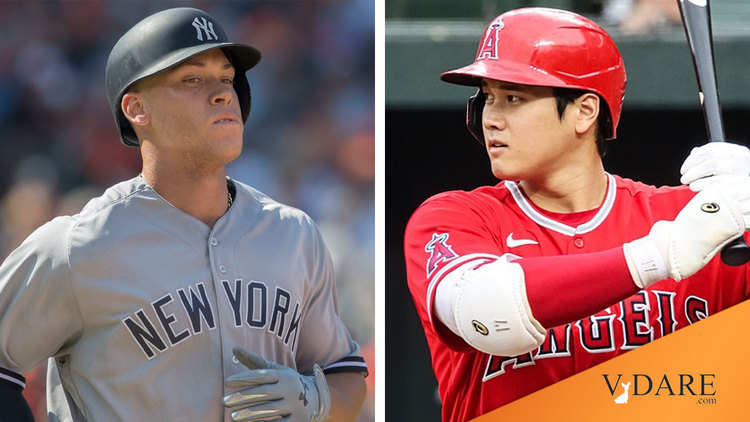 Earlier (July 2021) Why Hasn’t Any Other Ballplayer Done What Shohei Ohtani Is Doing?

In mid-20th century America, the most famous sports record was Babe Ruth’s 60 homers for the 1927 New York Yankees, which was broken in 1961 by Roger Maris with 61 when the season was lengthened by eight games. In the 1990s, a large number of players finally figured out you could hit more homers by lifting weights and taking steroids, so the record was extended to 70 by Mark McGwire and 73 by Barry Bonds. In the decade and a half since  steroid testing, the most was 59 by Giancarlo Stanton in 2017.

But the Yankees’ Aaron Judge hit two more today, to reach 59 with two weeks left in the season. This isn’t a fluke caused by unusual offensive conditions, the way famous marks like Maris’s home run record had much to do with 1961 being an expansion year that diluted the quality of American League pitchers, or Bob Gibson’s 1.12 ERA in 1968 being an outgrowth of 1963-1968 rules that favored pitchers.

In contrast, 2022 has been a pretty normal year for hitting (they deadened the ball slightly after a recent homer barrage), so nobody else has more than 39 homers (although Mike Trout might have reached 50 for the year if he hadn’t missed his usual couple of months). Nobody since Babe Ruth has hit 20 more homers than everybody else in baseball.

Judge is a LeBron-sized giant: 6’7″ and 282 pounds. They say in heavyweight boxing that a good big man beats a good small man. It could be that huge guys like Judge (and his often injured teammate Stanton) are more erratic, but now that he’s gotten everything in sync, wow.

Judge is not having an unbalanced homer-centric year, either. He’s hitting for average (.316, one point off the American League lead—if he keeps up his recent torrid streak he’ll win the rare Triple Crown for batting average-homers-RBIs), is leading the league in walks, has stolen 16 out of 18 bases, and is playing decent major league quality defense in center and right field (he’s not as good an outfielder as he used to be, but he’s still average for a major leaguer, which is very good). Judge helped the Yankees get out in front of their division with a huge first half of the season and then, when most of the Yankees collapsed, has been single-handedly carrying his team in the second half with a remarkable hot streak.

So, Judge would win the American League Most Valuable Player award without a dissenting vote, except that the California Angels two-way pitcher-slugger Shohei Ohtani, last year’s MVP, is doing it again. His hitting is down slightly from last year (34 homers, fourth in the AL compared to last season’s 45), but his pitching is even better (13-8, 2.43 ERA, with a distant chance of overhauling Justin Verlander for the ERA). By one advanced metric, Ohtani’s the second pitcher in the American League to Dylan Cease.

Nobody has routinely both pitched and hit in major league baseball since the dark ages of the 19th century.

Ruth transitioned from star pitcher to epochal slugger over the course of 1918-19, but, unlike Ohtani, who very much wants to do both, Ruth’s plan was to not have to pitch anymore. (I suspect Ruth was losing some velocity off his fastball—strikeouts were falling fast—and his pitching career would have faded if he didn’t invent the uppercut home run swing. Ruth would likely have been one of the countless pitchers to see his career fade due to obscure arm ailments if he hadn’t resolved to revolutionize baseball strategy. As Ty Cobb observed, if Ruth hadn’t been a pitcher, somebody would have ordered him to stop fooling around with trying to hit home runs. But because nobody expected a pitcher to hit well he was allowed to innovate.)

So, who should be the AL Most Valuable Player?

First, the synthetic Wins Above Replacement statistic isn’t totally reliable (e.g., there are two major variants), but it shows a small lead for Judge over Ohtani (and a huge lead over everybody else).

Third, Ohtani wasn’t all that good during the early months when the Angels still had a chance to make something of their season. He’s been pouring it on after they dropped out of contention. In contrast, Judge has been the center of the spotlight all season, and may have, all by himself, prevented a humiliating collapse by his team in September.

New York Yankees on the Brink of Historic Collapse

But in September, Judge has slashed .491 batting average / .586 on-base percentage / 1.018 slugging percentage, meaning he’s averaging over 1.6 bases every time he come to bat.

Fourth, because pitchers have their own annual Cy Young Award, the MVP award should be biased slightly toward players, with pitchers only winning when no hitter deserves the award. This year, Ohtani is an even better pitcher than hitter.

Fifth, Ohtani doesn’t play defense. When not pitching, he’s the designated hitter who doesn’t play the field, just hits. He’d probably be a fine right fielder (he’s fast and of course has a great arm), but he’s not quite superhuman, so he’d rather not have to deal with playing the outfield as well as pitching and hitting. It’s less hard to come up with an adequate-hitting DH than it is at any real position, so WAR measures him against a higher bar.

Sixth, Ohtani insists on being used in a six-man starting pitcher rotation rather than the usual five-man rotation. This probably hurts the Angels, marginally.

Seventh, Ohtani, while very fast (last year, he was around the 90th percentile among big leaguers in footspeed), gets caught stealing a lot. He was 26 out of 36 last year and 11 of 20 this year. In this, he’s a little like Babe Ruth, who was also a risk-taker on the basepaths, and his managers just had to put up with it because he was Babe Ruth.

On the other hand, Ohtani is pitching and hitting like a nine-year-old boy’s baseball fantasy.