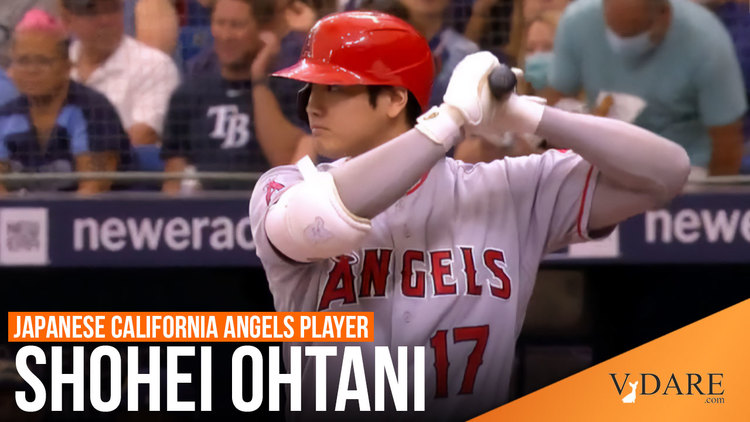 Why Hasn't Any Other Ballplayer Done What Shohei Ohtani Is Doing?

In baseball, nobody since Babe Ruth in 1918 has been an extremely productive pitcher and hitter at the same time, until Japanese import Shohei Ohtani. After Sunday’s game, the 6’4″ and 210 pound pitcher/hitteer is currently ranked on Wins Above Replacement as the 14th best pitcher in the major leagues and the 7th best hitter, which makes him the most valuable player overall by a sizable margin: 5.7 wins above replacement to 4.7 for next place.

Shohei Ohtani hits a double, a triple and a homer https://t.co/rkmpsa6kns #MLBFilmRoom via @MLB

Ohtani’s 2021 season sounds like a 9-year-old’s baseball fantasy, as he routinely performs feats like throw a 101 mph fastball and hit a 450 foot homer … in the same game.

In a little under half a season, he is second in the big leagues in homers with 25, second in total bases with 177, third in slugging percentage at .668, fourth in triples with four and 15th in stolen bases with 11. In other words, as an offensive player he’s a rare combination of power and speed.

As a pitcher, the California Angels have been treating him a little gingerly (not wanting to lose this tremendous hitter to an arm injury), having him throw only 59 innings so far. But he’s averaging 12.4 strikeouts per 9 innings, sixth among starting pitchers. In 11 starts, his record is 3-1 with a 2.58 ERA. Although his control was erratic early in the season, he’s generally said to rank behind only Jacob De Grom for sheer stuff. His split-fingered pitch is particularly notorious since it looks just like his sailing fastball until the bottom drops out:

An interesting question is why hasn’t anybody else played both pitcher and started at a hitting position? A number of players have shifted from pitcher to hitter or vice-versa: e.g., Smokey Joe Wood, Lefty O’Doul, Bob Lemon, and Rick Ankiel. But doing it at the same time?

Back in the pre-Babe Ruth era it wasn’t unknown for players to both pitch and play the field in the big leagues, while their best use was assessed. Hall of Fame first baseman pitched in 20 games in his rookie year of 1915 while also playing about 60 in the field. But then he became a full time first baseman.

Ruth famously started as a pitcher, and might have been the best in the American League at age 21 in 1916, going 23-12 with a league-leading 1.75 ERA. He was also one of the best hitters in the American League from 1914 to 1917, batting .299 with a .474 slugging average in the Deadball Era in what was then a pitcher’s park. But even then the Red Sox never used Ruth as a fielder, only getting his bat into the lineup when he wasn’t pitching as a pinch hitter.

Finally in 1918, Boston played Ruth in the field in 72 games while pitching him in 20. He tied for the league lead in homers with eleven, while going 13-7 with a 2.22 ERA and winning two World Series games.

But … Ruth’s strikeouts per nine innings dropped from 4.7 in 1916 to only 2.2 in 1918. Strikeout rate is a pretty good indicator of pitching quality. A pitcher with a good defense behind him (and Boston had the best defensive outfield of the era) can get by a for a year or two if batters happen to hit his pitches at his fielders, but a pitcher who can’t strike out batters anymore due to a fading arm does not face a bright future.

I’ve never read that Ruth’s arm was fading so that contributed to why he demanded to shift away from pitching, but perhaps Ruth himself figured out he was headed toward mediocrity on the mound and focused on perfecting his radical home run swing. (As Ty Cobb observed, nobody felt it necessary to stop Ruth from trying to hit homers because he was just a pitcher so it didn’t matter if he was doing something stupid at the plate that everybody knew couldn’t possibly work.) Everybody likes to think of Ruth as a Lovable Big Dumb Lug, but the stats suggest to me that he was one of the greatest baseball minds ever.

To digress, I just now noticed that when Ruth started playing the outfield in 1919 one of the other Red Sox outfielders was a hard-hitting former home run leader who sounds like Bizarro to Babe Ruth’s Superman: Braggo Roth. Honest, Babe Ruth and Braggo Roth played in the same outfield together. Dan Holmes writes:

Bobby Roth, sometimes called Braggo, was an often insufferable self-promoter who bounced around among six American League teams in the years surrounding World War I, and was on the wrong side of two of the most lopsided trades of the Deadball Era. A player with diverse skills, Roth won a home run title and also stole home as many as six times in a season. But he was hampered by what one source called “the unhappy faculty of gaining enemies — apparently with cold deliberation.”

One reason that Ohtani can pitch and hit is because the American League has had the designated hitter rule since 1973: a player who bats for the pitcher but doesn’t play the field. So far in 2021, Shohei has pitched in 11 games, been the DH in 59, pinch hit in 5, and played the outfield in 5 (typically the last few innings of a pitching start after he has been relieved). Ohtani is well into the top 10% fastest runners in league, so he no doubt could play the outfield well.

But, he seldom does, probably for a couple of reasons: the temptation to try to throw a runner out at home from deep in right field while not sufficiently warmed up could lead to him hurting his valuable pitching arm; and because pitching and hitting is a lot to concentrate upon, and worrying about his fielding might be too much even for him.

My theory is that fielding miscues tend to rebound upon hitting: e.g., the 1980s Dodgers forced slugger Pedro Guerrero to play third base where he routinely humiliated himself with abundant errors. He constantly asked to be switched back to the much easier left field position. Finally they relented around Memorial Day 1985 and Guerrero immediately tied the National League record for home runs in June.

Sabermetricians have argued that, c’mon, how much does it matter if a player’s fielding percentage is .980 or .950, but, yeah, errors actually annoy teammates and depress the guilty at the plate. So the Angels aren’t in a hurry to humiliate their once in a century talent by having him overthrow the cutoff man and make other mundane errors.

Ohtani is the most spectacular example of an otherwise subtle trend against specialization in baseball caused by the trend toward hyper-specialization among pitchers. It used to be that baseball rosters of 25 featured only 9 or 10 pitchers because starting pitchers were expected to go 7 innings and be followed by one or two relievers. But now teams carry 12 or 13 pitchers, whose pitch counts are obsessively limited. Although the roster size was recently expanded to 26, the number of non-pitchers is constrained, which leads to novel developments among non-pitchers, even while pitchers are increasingly specialized.

Consider the Los Angeles Dodgers, a very rich and very smart franchise that has been to three World Series since 2017.

One of their best players, Chris Taylor, has never settled in at any one position but instead shuffles around wherever they need him. Cody Bellinger hit 38 homers as a rookie first basemen (the easiest position for sluggers to play in the field), but was later switched to centerfield, one of the hardest defensive positions. Max Muncy, a classic slugging first basemen at 6’0″ and 215 pounds also frequently plays second base, one of the hardest defensive positions. In 2019, the Dodgers had 36-year-old backup catcher Russell Martin pitch the last inning in four blow-out games without him giving up a run.

These are subtle backcurrents against the otherwise inexorable trend toward ever more division of labor in baseball.

One possibility is that Ohtani is, like Ruth, both an unusual talent and a hero who dares to dares to do what hasn’t been done. For example, the NBA instituted the three point shot from long-distance four decades ago, but nobody tried really hard to exploit the opportunity to score 50% more points by scoring from outside until Stephen Curry, whose dad Del, who played 16 years in the NBA, drilled him from a young age to shoot from long distance. Everybody had known that anybody choosing to shoot from 25-30 feet would get a lot of open shots, but nobody before Curry a decade ago had dared try it, just like nobody before Ruth had tried upper-cutting home runs and nobody before Ohtani had dared try pitching and hitting.