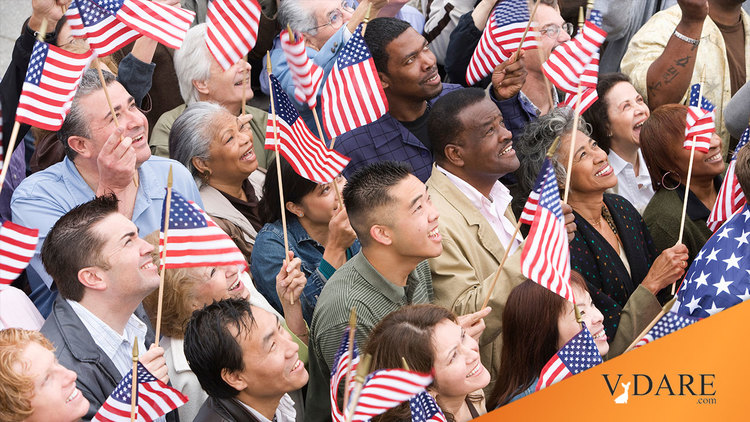 NYT Executive Editor Joseph Kahn [Email him/Tweet him] has descended from the mountaintop to detail for readers how Times journalists will examine ”the threat to democracy.”

A New York Times promotional email starts like this:

The executive editor of The Times, Joseph Kahn, has written the lead item in The Morning today to explain why The Times is focusing on the challenges facing democracy in the U.S. and around the world. — David Leonhardt

This is an election year unlike any we’ve experienced in recent decades. Not only do candidates of both major parties in the United States have starkly different views on the pressing issues of the day, including climate change, war, taxes, abortion, education, gender and sexual identity, immigration, crime and the role of government in American life. They also disagree on democracy itself, especially one of its essential pillars — willingness to accept defeat at the polls.

All year, our staff has sought to balance what we think of as politics, the candidates, polling, policy positions, campaign strategies, and views of voters on important issues, with coverage of acute challenges to democracy. Those include a deterioration in the integrity of constitutional democracy, manipulation of state election laws to limit or overturn the will of voters, and a global trend toward autocracy in places where democratic institutions once seemed solid. While we may continue to witness robust political competition in this midterm election cycle in ways that appear in keeping with American history, threats to that electoral system have grown relentlessly at the same time. Our coverage must examine both.

So while we have a large staff dedicated to reporting on politics, a special team of some of our best journalists, nationally and internationally, has produced dozens of explanatory and investigative stories on the causes of our democratic decline. These include the rise in political violence, especially on the right, election denial and its hold on many Republicans, disinformation and the profiteers peddling falsehoods, the people and money behind the Jan. 6 insurrection, the origins and popularity of leading conspiracy theories, and the partisan political motives of some leading jurists.

It is our deep and ongoing commitment to expose the cancers eating away at democracy, as well as joining the search for solutions. We have been gathering our coverage in a collection called Democracy Challenged.

Then there’s this, on the front page of the NYT yesterday:

There is a threat to democracy, of course. It’s the demographic upheaval caused by decades of uncontrolled immigration, the fomenting of unprecedented racial hatred against whites, and our precipitous slide into woke insanity.

But Kahn seems uninterested in that reality, instead dispatching a team of Times journalists to analyze 1,150 episodes of Tucker Carlson’s Fox News show to produce an ”interactive feature explaining how he pushes extremist ideas and conspiracy theories into millions of households.”

How about if Kahn dispatches a team of Times journalists to the neighborhoods of New York City? Or the border?

Where they’ll find masses of people who don’t even speak the same language, much less agree on the basics of American civic involvement.

It bears repeating that the founding fathers weren’t crazy about democracy per se. They suspected that throwing everything to a popular vote was a recipe for chaos and terrible governance.

Our Constitution makes that pretty clear. The amendments are there because if you put free speech to a popular vote, it would lose in a second. Equal numbers of senators for each state, regardless of size, is of course an ”anti-democratic” function, but one that was thought through.

The election of a president by states, and not the popular vote, simply reflects the reality that we are the United States of America, not the General Nation of America.

We’re a republic, not a democracy.

Still, popular elections remain central to our system. But instead of settling slight policy preferences within a homogeneous population that agrees on fundamentals, they’ve become a vehicle for advancing the raw desires of the biggest race.

The NYT would have no problem declaring that whites aren’t deserving of ”their way” simply because they’ve been the biggest race. So why the uncritical embrace of any other race getting its way?

It just blows my mind that this doesn’t get coverage in the legacy media. It can, of course, be covered in a way that isn’t racially partisan. It’s just not discussed at all. Kahn instead seeks to demonize whites and put up Tucker Carlson as a national madman.

The failure at the intersection of multiracialism and democracy is less a moral point than an engineering principle, like observing that a bridge without adequate support in the middle will collapse.

There’s too much of a ”God does not exist” scare factor for so many Americans when it comes to questioning multiracialism and diversity. To question it means to put equality into doubt, which is terrifying.

In other words, the Times doesn’t even want to ask the National Question.

But if you really want to talk about the ”threat to representative government,” you’re going to have to admit that societies can only bear so much racial heterogeneity before they collapse.

Trump’s ”election denial” is annoying and fruitless, but look at how conspiracy theories run wild in societies that are decaying to the point that nobody really trusts anyone else.

Or, even if you don’t favor the cause of whites, the true explanation.

But again, I suspect that stories talking about how American democracy has become a sh*tshow because whites are becoming the minority would be considered too dangerous. To even discuss it would be to lend some credibility to white grievance.

And we can’t have that.