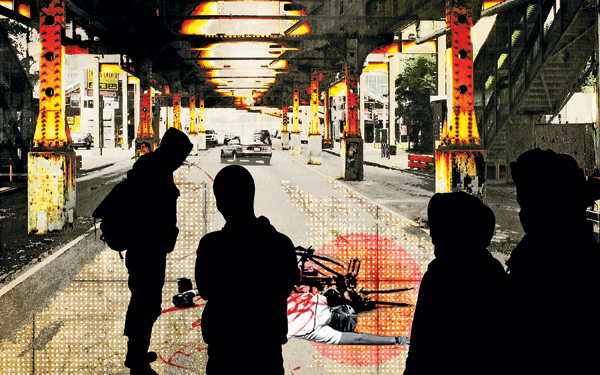 "A Mugging on Lake Street"

Continuing my recent Chicago nostalgia-fest, here's an article from Chicago Magazine by liberal investigative reporter John Conroy, whose career has been dedicated to exposing the use of torture by Chicago area cops on black suspects. In "A Mugging on Lake Street," however, the muggee was Conroy. While riding his bike westbound on Lake Street under the El tracks through the West Side of Chicago (which my in-laws were driven out of by violence in 1970) to his home in Oak Park, he was knocked unconscious by a 16 year old black kid. No robbery, no apparent motive other than racial hatred.

Not long after, I was talking about the incident with my neighbor and fellow journalist Alex Kotlowitz, [email him] interpreter of racial maladies in There Are No Children Here and The Other Side of the River.

I mentioned the coincidence of hearing the same thing from two such different sources. “I don’t think there is any question that it had to do with race,” Kotlowitz said. (Our initial conversation was over the fence, and I recently asked him to reconstruct his perception.) “There is some surmising here, but what other explanation is there for it? It is not like they had some animosity toward bikers.”

But he found the notion of a hate crime problematic. It presumes, he said, that the assailant acted out of racism, which by Kotlowitz’s definition requires a belief that one’s race is superior to another’s. “In this instance, I don’t think he felt superior. I think probably he felt diminished in some way and that was part of the lashing out.”

Modern liberal thought consists largely of dressing "Who? Whom?" up in sophisticated-sounding verbiage.

Speaking of the Lake Street El, my paternal grandfather used to ride the Lake Street Elevated Line everyday from his home in Oak Park, which native son Ernest Hemingway famously called a town of "broad lawns and narrow minds." Despite Hemingway's put-down, Oak Park produced perhaps the two most celebrated American artistic geniuses of the first half of the 20th Century in Hemingway, and Frank Lloyd Wright, who developed his Prairie Style while living there from age 22. Wright designed about a dozen houses within a block of my grandfather's (non-Wright) place.