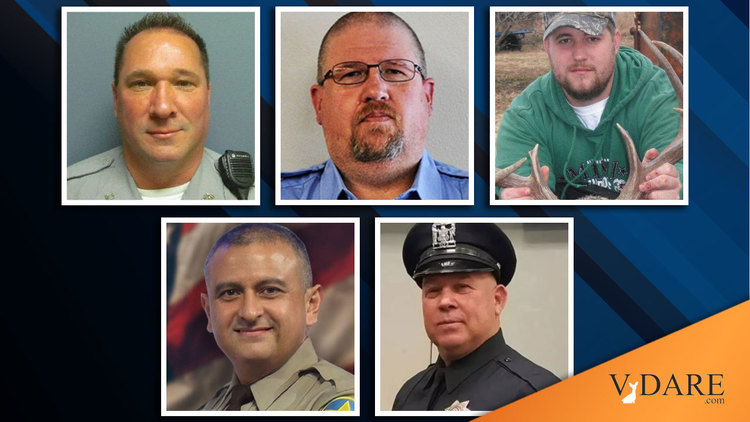 Paul Kersey blogged  recently on Heather Mac Donald's article Where is the outrage over the killing of Baltimore police officer Keona Holley?, NY Post, December 30, 2021, which is about the number of police killed by blacks.

As of Dec. 27, 2021, four unarmed black people have been slain by police officers since the start of the year, according to the Washington Post. The Post’s “unarmed” category includes violently resisting crime suspects.

That is, people who might have killed the police who shot them, either with their bare hands, or by disarming the officers and killing them with their own weapons. (Michael Brown, Trayvon Martin, and Ahmaud Arbery all died in the act of trying to disarm honest citizens.)

As I wrote in a 2014 column about Trayvon Martin's unsuccessful, but potentially lethal attack on George Zimmerman:

It is actually possible to kill someone with your bare hands—the US Armed Forces spends a lot of time teaching white and black teenagers how to do this in boot camp.

The 2012 Statistical Abstract Of The United States has a table of Murder Victims—Circumstances and Weapons Used or Cause of Death [Excel 36k] | [PDF 59k], which includes the statistic that an average of 877 people every year are killed by “Personal Weapons” by which the Census means “Hands, fists, feet, pushed, etc.”

It is not that easy to kill a police officer without weapons, because they go about in pairs, have many personal weapons of their own, various kinds of body armor, and are usually alert.

However, the Officer Down Memorial Page's list of police officers killed on duty includes four ways of being murdered, and deaths in 2021 from assaults—i.e., killed by unarmed people, not shot, stabbed or run over by vehicles, amounted to five deaths—two more than died by being stabbed.

Some of the dead below were killed in correctional settings, where police and guards are required to be unarmed, to prevent gun-grabbing.

Ruiz, a Mexican-American, was beaten to death by a white criminal who escaped from the Maricopa County Jail, led police on a chase in a stolen cruiser, and several other stolen cars, and—this being Arizona—was recaptured after being shot by a homeowner.

Corporal Keith Heacook succumbed to injuries sustained on April 25th, 2021, when he was assaulted after responding to a fight call in 11000 block of Buckingham Drive in Delmar, Delaware.

He was the only officer on duty when he responded to the call at approximately 5:00 am. Corporal Heacook was assaulted by a male subject who then repeatedly stomped on his head after he had become unconscious. The man then assaulted an elderly couple who lived across the street.

The stomper—who also assaulted an elderly couple—was Randon Wilkerson, who is black. He and Heacock are in the featured image above.

This case was covered here by Kenn Gividen in March.

Seventeen subjects had been arrested as part of a large multiagency narcotics investigation and were being booked into the jail. One of the men began to struggle with officers while being booked and struck Corporal Davis in the chest, causing him to suffer a ruptured aorta. He was transported to a local hospital where he passed away approximately one hour later.

Corporal Davis had served with the Washington County Sheriff's Office for 13 years. He is survived by his wife and two children.

Davis was white, the killer was black.

Correctional Officer Robert McFarland and Nurse Lorena Schulte were assaulted and beaten to death by two inmates in the Anamosa State Penitentiary infirmary during an escape attempt.

The inmates had developed a ruse to gain access to the infirmary by claiming to be there as part of the prison repair program. Once inside they attacked Officer McFarland and Nurse Schulte with hammers, inflicting fatal skull fractures on both. Another inmate inside the infirmary attempted to protect Officer McFarland and Nurse Schulte but was also attacked and suffered a skull fracture.

These are the two white victims: 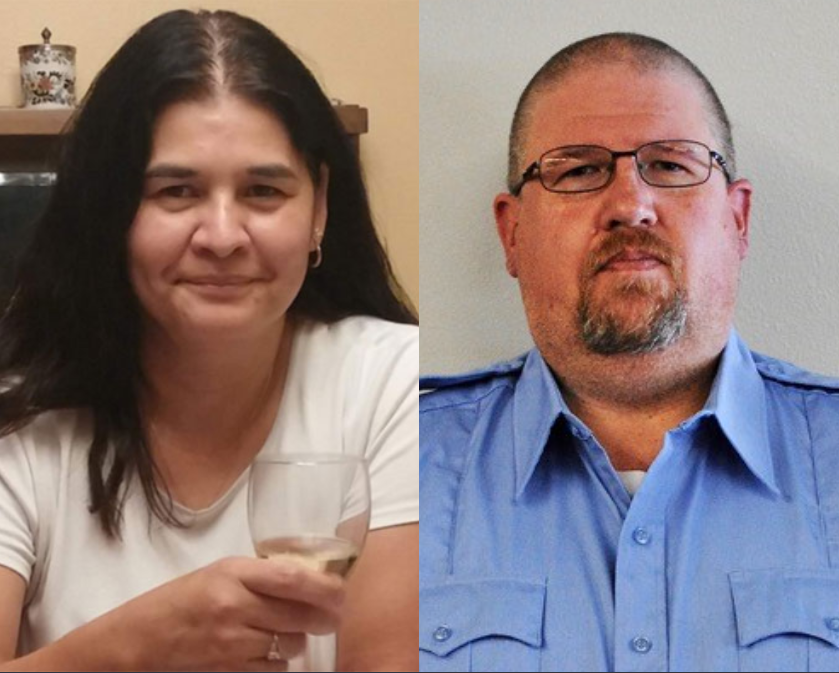 Here are the two suspects, one black and one white: 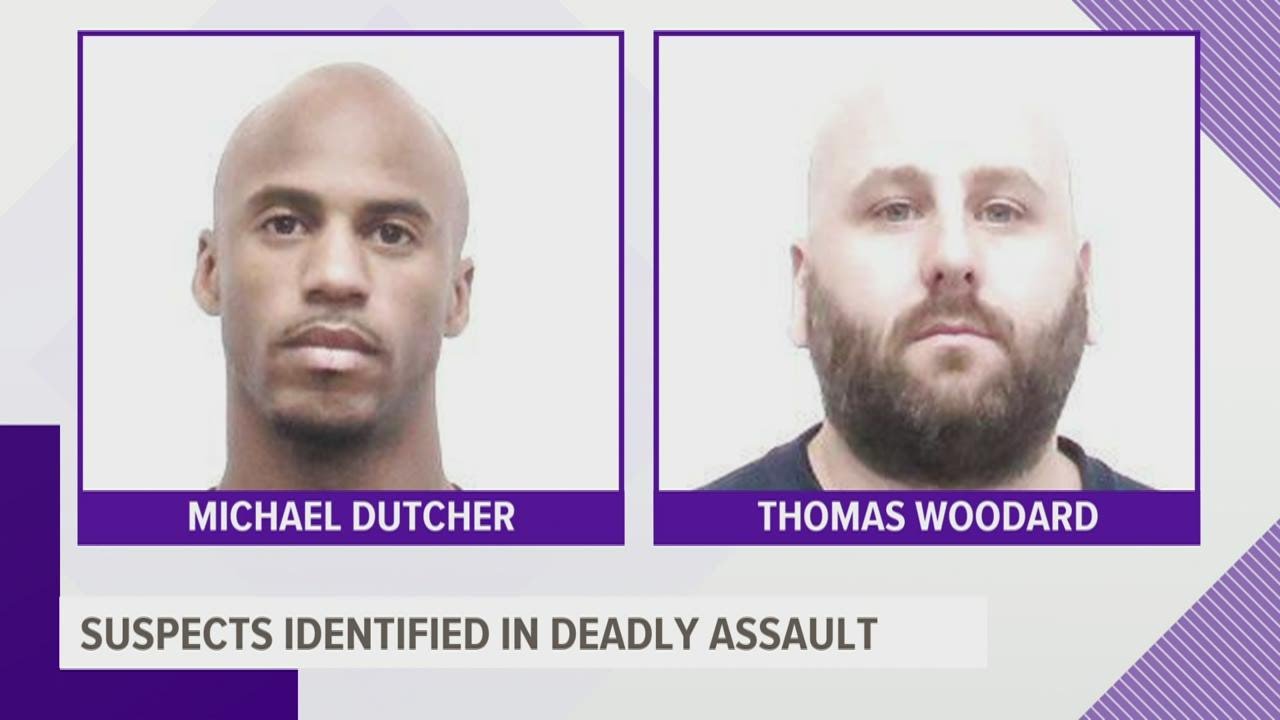 You may be wondering if people armed with hammers count as “unarmed.” Well, the BLM movement thinks they do. This case, from Canada, was found after a search for the words “armed only with a hammer.”

Officers shot at Andrew Loku in 'fear of black man with a hammer,' family's lawyer says 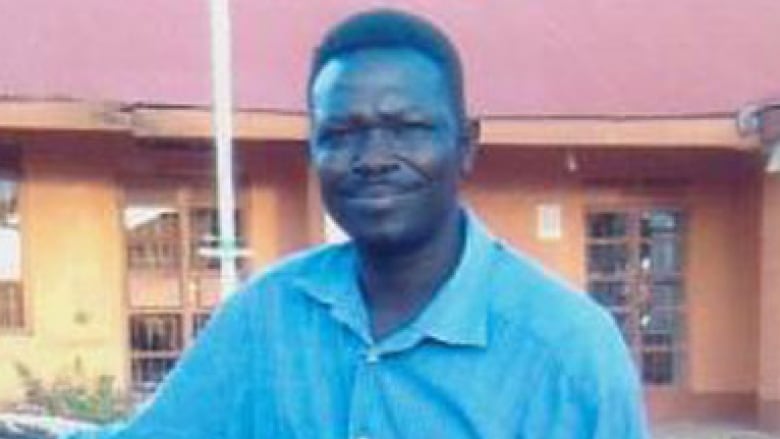 Jonathan Shime among a chorus of lawyers calling for race-based data on incidents involving use of force, CBC, June 26, 2017

Of course, the number of people who die from being beaten to death with hammers is very large.

This one is slightly different:

Police Officer Gary Hibbs suffered a fatal heart attack while attempting to arrest a subject at an apartment on 14th Place.

He and other officers had responded to the apartment on March 4th, 2021, to investigate a domestic violence call. During the investigation, he attempted to place a subject under arrest, but the man resisted and began fighting with him. Officer Hibbs collapsed during the struggle.

Officer Hibbs was transported to Franciscan Hospital where he remained until passing away on March 12th, 2021.

Hibbs was white. The person he was fighting with may have been white, too. I haven’t found that he was charged with murder or manslaughter. If you’re wondering if this heart attack counts as a killing, the answer is that it always does when black people die as a result of exerting themselves in trying to kill police.

Not only is that how George Floyd died, but also Eric Garner, and many people said to have died of cocaine-induced “excited delirium.”  See Steve Sailer's WASHINGTON POST: In Case a Jury Decides George Floyd Died of Drugs and Bad Health, Well, Blacks Ruining Their Health with Drugs Is the Fault of White Supremacy Too.

And if you're wondering why police get a little nervous when facing an armed black maniac with a hammer, or during a traffic stop, here's another, larger statistic from Heather Mac Donald's column above: