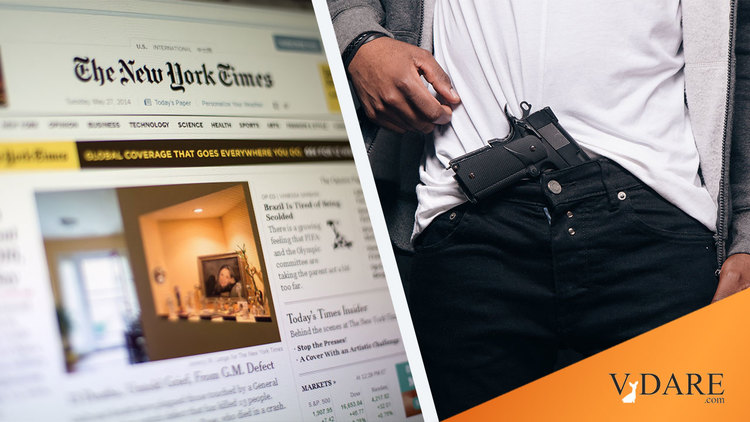 The Atlanta massage parlors massacre is, racially, the kind of man-bites-dog story the media love. With 200 million white Americans, every so often one is going to do something extremely bad, and the press can then keep the story in the headlines long enough to trick a whole bunch of people into thinking it represents reality in general rather than a story that’s interesting because it’s unusual.

The reality is harder to keep track of. Even when the Establishment Press does statistically valid work, nobody can remember it because it doesn’t fit The Narrative.

For example, in 2016, the New York Times conducted an iSteve-like study of all 358 mass shootings in 2015 (which I wrote about here), and found “nearly three-fourths of victims and suspected assailants whose race could be identified were black.”

A Drumbeat of Multiple Shootings, but America Isn’t Listening

Most shootings with four deaths or injuries are invisible outside their communities. And most of the lives they scar are black.

By Sharon LaFraniere, Daniela Porat and Agustin Armendariz
May 22, 2016

CINCINNATI — After the slaughter of nine worshipers at a South Carolina church last June, but before the massacre of eight students and a teacher at an Oregon community college in October, there was a shooting that the police here have labeled Incident 159022597.01. It happened on a clear Friday night at an Elks Lodge, on a modest block of clapboard houses northeast of this city’s hilly downtown. Unlike the butchery that bookended it, it merited no presidential statements, no saturation television coverage.

But what took place at 6101 Prentice Street on Aug. 21 may say more about the nature of gun violence in the United States than any of those far more famous rampages. It is a snapshot of a different sort of mass violence — one that erupts with such anesthetic regularity that it is rendered almost invisible, except to the mostly black victims, survivors and attackers.

According to the police account, more than 30 people had gathered in the paneled basement bar of the lodge to mark the 39th birthday of a man named Greg Wallace when a former neighbor, Timothy Murphy, showed up, drunk. Fists flew. Mr. Murphy ducked out the door, burst back in with a handgun, and opened fire. …

By the end, 27 bullets had flown, hitting seven people…

The Elks Lodge episode was one of at least 358 armed encounters nationwide last year — nearly one a day, on average — in which four or more people were killed or wounded, including attackers. The toll: 462 dead and 1,330 injured, sometimes for life, typically in bursts of gunfire lasting but seconds. …

The divide is racial as well. Among the cases examined by The Times were 39 domestic violence shootings, and they largely involved white attackers and victims. So did many of the high-profile massacres, including a wild shootout between Texas biker gangs that left nine people dead and 18 wounded.

Over all, though, nearly three-fourths of victims and suspected assailants whose race could be identified were black. Some experts suggest that helps explain why the drumbeat of dead and wounded does not inspire more outrage. …

Michael Nutter, a former Philadelphia mayor, who is black, said that society would not be so complacent if whites were dying from gun violence at the same rate as blacks.

“The general view is it’s one bad black guy who has shot another bad black guy,” he said. “And so, one less person to worry about.”

Droves of experts study high-profile massacres by so-called lone-wolf assailants, usually driven by mental disorders, at schools, workplaces and other public spaces. Academics regularly crunch data on single homicides and assaults. But the near-daily shootings that wound or kill several victims — a relatively small subset of the shootings that kill nearly 11,000 people and wound roughly 60,000 more each year — are uncharted territory for researchers, said Richard B. Rosenfeld, a professor of criminology at the University of Missouri-St. Louis.

The Times compiled its list of 358 shootings with four or more casualties from largely crowd-sourced lists managed by the social media network Reddit and Gun Violence Archive, a nonprofit organization. The groups recently combined their efforts at the website gunviolencearchive.org.

… Counting assailants among casualties increased the total number of cases by fewer than three dozen, most of them domestic violence shootings that ended in suicide. Hispanics were not separately identified, because police reports do not systematically identify victims and suspects by ethnicity, only by race.

There are 358 reasons for those 358 shootings, though some remain a mystery; in about a fourth of the cases, investigators have discerned no motive.

As for the rest, some patterns stand out. The fewest occurred while another felony, such as a burglary, was underway. Domestic violence shootings were nearly as infrequent, but were among the deadliest.

About a third were provoked by arguments, typically drug- or alcohol-fueled, often over petty grievances.

Another third of the 358 cases — and the most common in cities with more than 250,000 residents — were either gang-related or were drive-by shootings typical of gangs.

But the police and prosecutors say many of those were not directly linked to criminal activity, such as a dispute over a drug deal. More often, a minor dust-up — a boast, an insult, a decision to play basketball on another gang’s favorite court — was taken as a sign of disrespect and answered with a bullet, said Andrew V. Papachristos, a Yale University professor who studies gang behavior.

But who can remember the results of the New York Times’ study of 358 mass shootings when the entire media is telling you over and over about one mass shooting?

Will the New York Times ever again publish murder offender statistics by race?