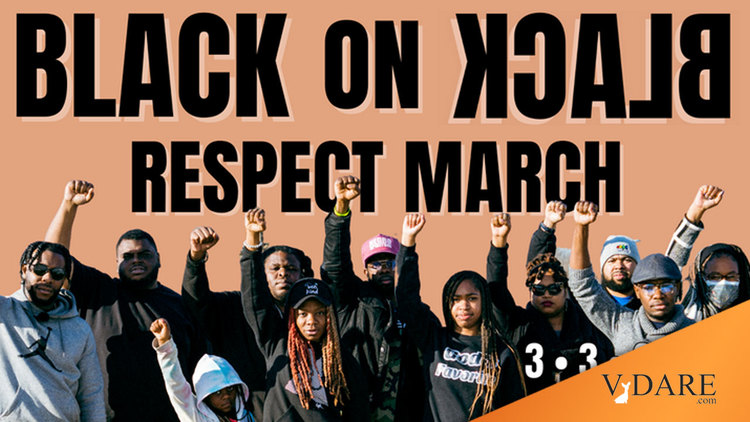 100 Years Ago, Tulsa Had "Black Wall Street," Now It Has Blacks Marching Against Black-On-Black Murders

Earlier: The Race Riots A Hundred Years Ago (Including Tulsa) Were Almost Always A Reaction To Black Crime

But what does this have to do with Black Wall Street in Tulsa? Shouldn’t the heirs of this mighty empire be able to easily reproduce what their ancestors reportedly built?

TULSA, Okla. (KTUL) — Hours after a man was shot and killed in north Tulsa, a group marched through the streets in protest of gun violence in their community.

Their route took them within a mile of that crime scene.

Data from the city shows Black Tulsans are three times more likely to become victims of a homicide than white Tulsans.

This march, organized by Negro Spiritual 121, is meant to change that.

Among those making the mile-long trek to Chamberlain Park was Lamar Norman Jr.

Police say a teen was behind the gun.

Co-organizer of the march, Richard Baxter, is tired of the violence, which is why he came up with the idea for the rally.

“When somebody Black is killed by somebody Black, it’s not business as usual,” he said. “We are the change. Enough is enough. No more gun violence in our community.”

While the group hopes this will spark a solution, they’re also remembering the lives lost to that problem.

“When it comes to your children, and when it comes to just the community, we need to all stick together,” said Xzaviere Chatman, who lost her son Xzavion to gun violence.

Organizers are working on putting together a youth mentorship program in the north Tulsa community.

One hundred years after the Tulsa Race Riots and the magisterial, mythical Black Wall Street in the city (which, suspiciously, never came back) ceased to exist, a black organization named Negro Spiritual is imploring black people not to kill one another.

After carefully reading the above article, one must ask whether the murder of a white person by a black would elicit the same response from the black community.

Best of luck to Negro Spiritual to convince blacks to stop shooting each other, especially in Tulsa, the home of the once vaunted Black Wall Street.