From: Adam Rutherford [Email him]

My new book, How to Argue With a Racist, comes out next week. It's a manifesto of sorts, a pugnacious attempt to arm the reader against racism, both overt and casual. My weapons are bleeding edge science and history, which are deployed to debunk many racist tropes, in terms of skin colour, intelligence, sport and ancestry. 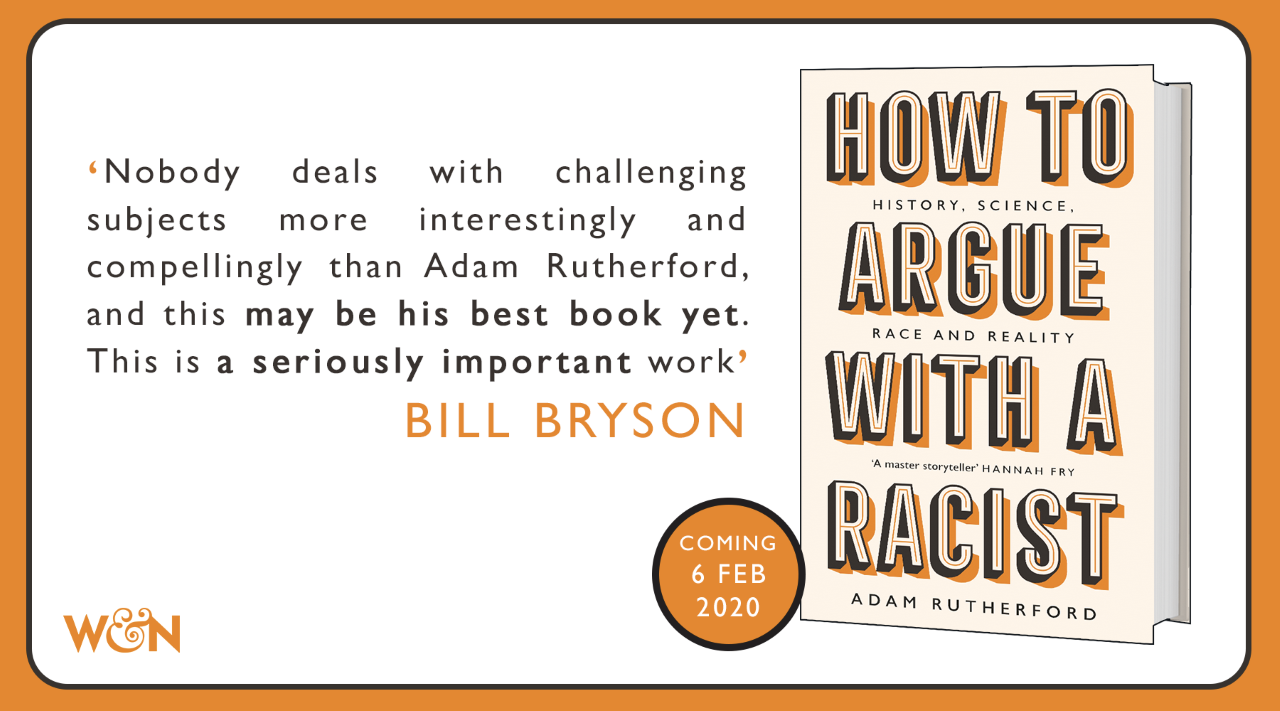 Racism is a prejudice that has a longstanding relationship with science. The invention of race occurred in the age of empires and plunder, when men of the Enlightenment classified the people of the world, mostly from their armchairs. But with beautiful irony, genetics is also the field that has demonstrated that race is not biologically valid, and science is no ally to racists.
The book is short, factful and punchy; Bill Bryson really liked it. if were so inclined, you could share anything about it in your networks, and I would be eternally grateful.
Here's a summary piece from the Observer.
It's also Book of the Week of Radio 4 starting on the 10th Feb, and I'll be talking about it, erm pretty much everywhere.

HOW TO ARGUE WITH A RACIST: History, Science, Race, and Reality
http://smarturl.it/HTAWAR

Published on February 6th, 2020. Thank you so much to all who have helped me with this. You know who you are, but my editor Jenny Lord above all.

with love and power
Adam
<TRANSMISSION ENDS>
James Fulford writes: I was a little surprised to see this in our inbox, but of course when you have a book to sell, you email everyone, and we'll actually buy it when it comes out.
The only question is whether to have Lance Welton attack it scientifically, or me attack it journalistically. Either can be fun. See Robert Sussman’s “Tainted Sources”—Playing The Telephone Game Against AMERICAN RENAISSANCE’s Jared Taylor for my way of dealing with this kind of thing.
However, I'd like to remind him that, as Peter Brimelow put it in Alien Nation, the new definition of "racist" is "anyone who is winning an argument with a liberal.Or, too often, a libertarian. And, on the immigration issue, even some confused conservatives."
So in effect, anyone who says that the person they're arguing with is racist has lost.