Earlier: Meet Adam Rutherford, Another Mixed-Race Enforcer Of The PC War Against Science

How to fight racism using science
Misguided assumptions about race are going mainstream, but hard facts can help you combat entrenched attitudes

Ironically, articles asserting Race Does Not Exist dogmas about how “race” has been disproven and real scientists use the word “population” are categorized in The Guardian under “Race.”

It’s almost as if “race” is the word that everybody, including governments and media, uses.

… The last white man to win the 100m final at the Olympics was Allan Wells in 1980, a year when the US boycotted the event. This was also the last time white men competed in the final, five in total. For many, this forms the basis of a long-standing assumption that black people – and more specifically African Americans, Jamaicans or Canadians – have a biological advantage for explosive energy sports.

Unfortunately, elite sportspeople are an abysmal sample on which to make generalisations about populations – they are already wonderfully freakish outliers. The sample size is hopeless, too: the total number of athletes that have competed in the 100m Olympic final since Wells took the gold is 58. Five of them were African, and not from the west African countries from where the enslaved were taken. By this metric, Africans are exactly as successful as white people in the 100m since 1980.

The argument that informs this misguided idea is that centuries of slavery have resulted in selection for explosive energy genes (about which we know very little).

More popularly and plausibly, the argument is that tens of thousands of years of separate evolution in sub-Saharan Africa led to physical differences on average.

This is also a total nonstarter, for many reasons. Most significantly, we can look for the signals of evolutionary selection in African Americans since the beginning of transatlantic slavery, that is, genes that have proliferated in that population. A 2014 study of the DNA of 29,141 African Americans showed no signs of selection across the whole genome for any trait in the time since their ancestors were taken from their African homelands.

African-Americans are probably less selected for falciparum malaria avoidance than their distant relatives in Africa, so the rate of sickle cell anemia appears to be lower in African-Americans due to hundreds of years of less selection pressure to maintain this dangerous but useful gene variant. Of course, this is one of the most powerfully selected upon single genes.

But for the sake of argument, let’s pretend that genes were selected that related to power and strength. Why then do eastern Europeans dominate weightlifting, yet are absent from sprinting?

Because weightlifting and sprinting are quite different sports that favor different body types. For example, relatively long legs are useful in sprinting while relatively short legs are useful in weightlifting, in part because if you have short legs you can qualify for a lower weight class. Consider the famous Turkish “Pocket Hercules” Naim Süleymanoğlu who was only 4’10”.

Why do African Americans dominate in boxing, but not wrestling?

Where are all the black sprint cyclists? Why is it that in the 50m freestyle in swimming in the whole history of the Olympics, the number of African American finalists is… one? None of these facts align with the slavery explanation for African American dominance in the 100m.

The transatlantic slave trade also imported millions of West African people to South America. The number of South Americans of any ancestry to have competed in the 100m finals? Zero.

In general, different New World populations of blacks have fairly different points of origin in Africa: 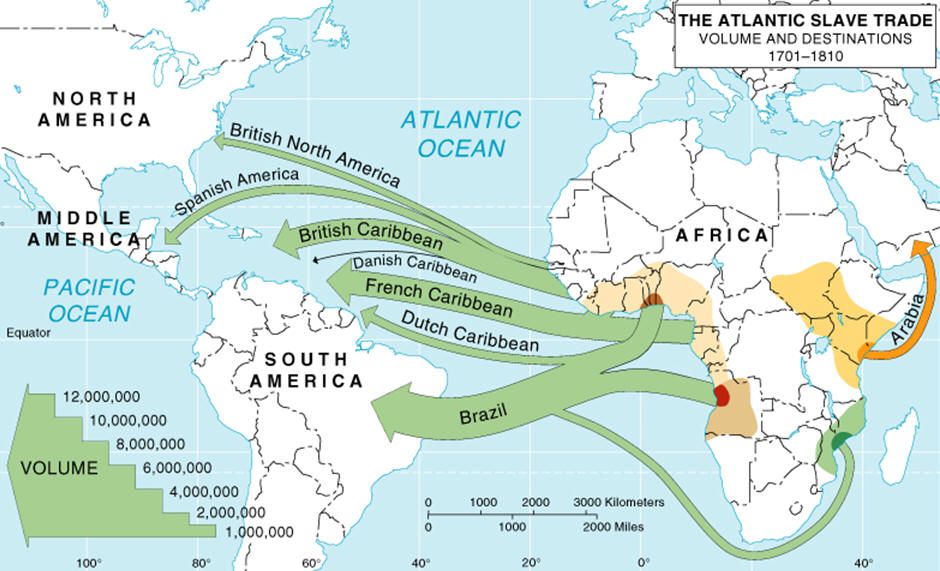 The point is this: sprinters in the Olympics, or indeed any elite sportspeople, are not a dataset on which a statistician could draw any satisfactory conclusion. Yet it is precisely the data on which extremely popular racial stereotypes are based. Elite athletes deserve better praise than the belief that they have auspicious ancestry.

Actually, as I pointed out to Rutherford and his friends last year:

Actually, the sample size is fairly close to every man on earth. By age 12, 99 percent of boys know some other boy who is a faster runner than them. The 1 percent who don’t keep competing at running until they meet somebody they can’t ever beat. This process goes on and on until, finally, there are eight black guys lined up in the Olympic 100-meter dash final. The gun goes off, and a little under ten seconds later Usain Bolt wins and goes on to make $100 million in endorsements.

Keep in mind that this 72 for 72 streak in the Olympics is kind of a fluke. In the second most important men’s 100 meter dash race, the World Championships, which are usually held in odd-numbered years (i.e., the year after the Olympics to coast on Olympic interest and then the year before the next Olympics), no non-black has ever won a medal. But there has been one non-black finalist in each of the last 5 World Championships.