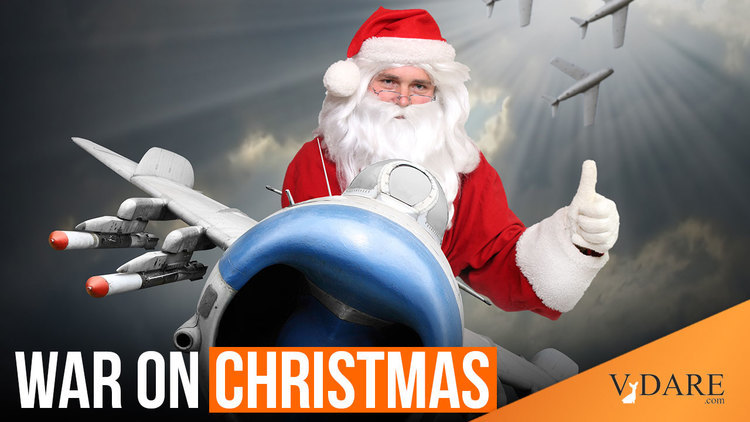 War Against Christmas 2001: The Winner!

Years and years ago, Democratic candidate Al Smith, attacking FDR and the spendthrift policies of the New Deal. said "Nobody shoots at Santa Claus." As our War Against Christmas competition has shown over the years, Smith was wrong. People are taking potshots at Santa all over the place. But this year Santa is shooting back.

For the first time that we can recall, there's been resistance to the War on Christmas. People have apparently decided to fight. We reported earlier that the Kensington, MD ban on Santa Claus had been met with a Million Santas March. King County, WA supervisor Ron Sims had "clarified" his ban on public employees wishing each other a Merry Christmas. You may not have heard that, after the Poinsettia Ban Ron Kyser reported on, in which Ramsey County, MN banned red poinsettias from their courthouse, some public employees in Minneapolis apparently braved the post 9/11 security checks and smuggled in red poinsettias.

A letter from George Holowchak alerted us to a pro-Christmas column by Lawrence Hall in the New Jersey Star-Ledger that was typical of the countrywide reaction to the WOC:

Attack on holiday tradition is becoming an evergreen

"In Canandaigua, N.Y., teachers and staff at the Canandaigua Primary School are being advised to use other words than Christmas.

"It has been brought to our attention by concerned individuals in the community and in our schools that the word 'Christmas' is being used in relation to the season," Cheryl Eng-Link, the school's principal and p.c. commissar, wrote in a memo distributed to school staff.

"Please be advised it is more appropriate for us to use words such as 'holiday,' 'evergreen tree,' etc." The memo directed staff to use words that are "secular in nature." "

And an extremely anonymous correspondent wrote:

In the halls of a very, very, very large transnational corporation (certainly how they like to think of themselves), of which the CEO's lips are regularly affixed to the hind quarters of Jesse Jackson, there appeared a band of merry-makers numbering about a score, singing ... Christmas Carols! And they did go on and on!

One would hardly have seen this a short year ago.

With respect to the Christocentric American culture, the status of hypersensitivity in this corporation-state? Gone with the Wind.

I had been telling everyone that this was going to be a very strong Christmas, as patriotism would naturally translate into strengthening the bonds of the native culture."

Fred Fries, one of our most alert readers, was among the first to notice the resistance theme. He wrote:

You predicted it, Peter!  (And worse in store, if people don't act.  My kids are already bringing home horror stories from school of "Winter Solstice Holiday" as a synonym for Christmas.)

"Looks like Vdare.com's friends are legion, many probably without realizing it!

Check out these few voices, randomly chosen…from at least a dozen-and-a-half I've come across this Christmas Season which have been raised in strenuous, sometimes bitter protest at the annual assault on The Season.  Vdare.com's influence shows itself here and elsewhere:  I doubt such a convergence would have happened were it not for its leadership."

Santa is appalled by Bill O'Reilly

If religion offends you, stop reading by Linda Chavez

Christmas and the Sensitive Person's Veto by John Leo

The abolition of Christmas, by Patrick J. Buchanan

For this blatant flattery, we've decided to award Fred the traditional autographed copy of Alien Nation - substituting a bottle of champagne if he already has too many copies of Alien Nation in his library of incorrect literature or just prefers a drink.

Now that establishment columnists have noticed the War Against Christmas, is it over? No, it's just been joined. Just in case, you're relaxing, look at this from Shara Rollins in Oklahoma City:

Last week I attended my city's Christmas parade, which as of this year has been re-christened "The Festival Of Lights Parade." Of all the floats in a parade that is supposed to celebrate a religious holiday, the only float that represented a religious organization was a float done by the pseudo-religious Chinese meditation cult, Falun Gong. We were accosted by a drove of small Chinese women handing out Falun Gong literature. I guess nothing says Christmas like a bunch of meditating members of a cult. I've attached a picture of the festive float. Notice the plea for compassion and tolerance.

(This is obviously some kind of mistake on the part of the Falun Gongers. Everyone knows that Truth-Compassion-Tolerance Day is on May13th.)

See you next year!