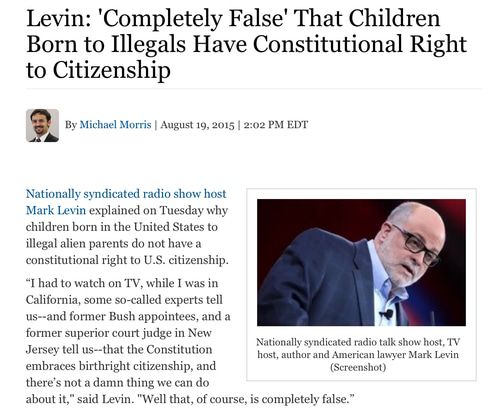 An Illinois Paleoconservative Shares On Mark Levin And The Fourteenth Amendment

Re: Paul Nachman’s "Becoming A U.S. Citizen Should Require More Than Your Mother Successfully Sneaking Past The U.S. Border Patrol."

I read Paul Nachman’s article on birthright citizenship and he mentioned Claremont’s Edward Erler  in the article, among others who know the true meaning of the Fourteenth Amendment.

On  August 19, 2015 I was listening to Mark Levin and he had on his show Edward Erler who Levin said,  was an authority on the Fourteenth Amendment and birthright citizenship.

I saved a copy of the interview from Levin’s web site the next day so I would have reference on the true meaning of the Amendment. This is a great interview that I would like to share with VDare.com readers.