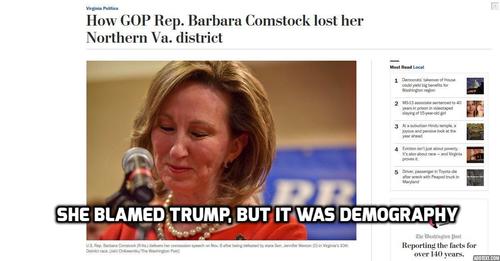 Re: Allan Wall’s blog post Media Celebrates Midterm “Firsts”. And What About Those Foreign-Born Voters?

That's exactly the story of the Congressional district where I have lived since 1983, in the southwestern corner of Fairfax County, VA, outside Washington, DC.  In that time we have seen the school population go from predominantly redneck to yuppie, to immigrant.  Our Congressperson had always been Republican until this election.

The handwriting was on the wall in 2016 when Hillary carried the district by a 10% margin and the incumbent, never-Trumper RINO Barbara Comstock, just squeaked by.  This time she lost handily to the very liberal challenger, Jennifer Wexton.  There really was nothing that Comstock could do.  She might as well have just stepped down and saved her campaign money. It was purely demographic.

Here we saw the Democratic blueprint for permanent future dominance.  And they have to keep bringing in new immigrants, because the longer immigrants are here, the more conservative they become.