An Illinois Paleoconservative On Luis Gutierrez's Threats Of "Civil War" 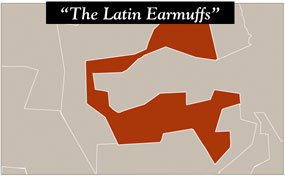 Latino Representative Luis Gutierrez of Illinois has now stated if amnesty is not passed before Christmas he will create a Civil War in the Democratic Party.[ Gutierrez Warns of 'Civil War' Among Democrats, by Warner Todd Huston, Breitbart, November 3, 2014] And yes, he is just the "Latino" representative! He could care less about any white or black folks in his district that was rezoned in the most bizarre possible pattern (pictured right) to benefit Democratic Hispanic votes!

Excuse me if I'm wrong, but shouldn't Luis and his flock be well prepared for such an event? Haven't Hispanic countries’ populations been great at Civil Wars?! It seems one just leads to another, including the current lawlessness in southern Mexico.

I say if it's Civil War they want then give it to them!

The writer is not talking about an actual Civil War, of course. (That never turns out well.) But are we sure Congressman Gutierrez is speaking metaphorically?