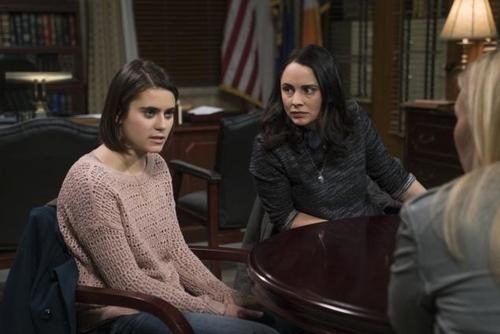 From: A Regular Law And Order Watcher [Email him]

You might not have seen this, but last week the great Dick Wolf, producer of the Law & Order series, presented his take on the UVA rape hoax on "Law & Order: SVU." Part of the story actually followed what really happened—the overzealous media type (TV instead of print), the lying student "victim," and the activist that wanted to promote the "Rape Culture" narrative at all costs. But, good ol' Dick couldn't leave it at that.['Law & Order: SVU' airs take on University of Virginia frat house rape case, BY Melissa Chan, NEW YORK DAILY NEWS, April 2, 2015]

However, through some rather insane plot gyrations, they managed to make it so that the "victim" really was raped by one frat boy. And of course, the real tragedy was that, because of all the lies told by the "victim," they wouldn't be able to prosecute the "real rapist." Of course, catfishing and Haven Monahan weren't mentioned....but at the end, cue the shot of the smirking, very overprivileged, very white frat boy with the "I just got away with rape" expression....roll credits.

Because, of course, the Narrative has to be preserved at all costs.