A Georgia Reader [Email him]

When I saw this article in the local city paper I thought of a few words from John Derbyshire’s TakiMag Article Quarterly Potpourri in the context of Race Relations: “we have passed from hope to despair”.  For despair you must for a nation gone insane.  Whether immigration or race relations is the “chicken or the egg”, the result is the same, reason is no longer a governing principle in this country.

Teen suspected of breaking into home, shooting at woman 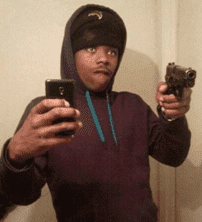 Anthony Stokes died March 30 in Roswell after allegedly taking part in a crime spree in North Fulton. He was the recipient of a new heart two years ago. This was one of his most recent Facebook photos.

“Stokes made news in 2013 at the age of 15 when he needed a heart transplant to live. He had a condition called dilated cardiomyopathy, where the heart does not pump properly."

"Staff at Children’s Hospital of Atlanta decided not to place Stokes on the recipient list over concerns of past “non-compliance” and previous troubles with the law. He already had to wear an ankle tracking device and had a long juvenile crime sheet. DeKalb County police report they had arrested Stokes 11 times since 2010 on charges ranging from making threats to burglary and weapons charges. He had been arrested six months prior for burglary charges. The hospital was concerned Stokes would fail to follow doctors’ orders regarding the strict medication program that transplant patients face after they receive a new organ."

"Regardless, his family pursued the transplant, alleging the hospital was denying him because of his record, which they claimed misrepresented the boy. The hospital relented after media attention and gave him a new heart. [More ]