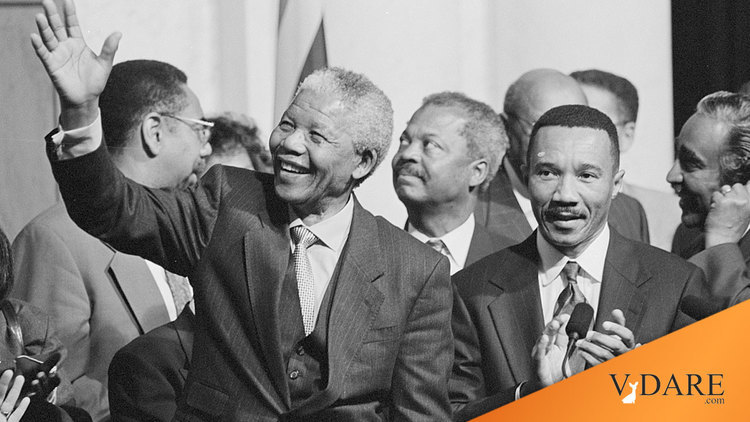 South Africa In Our Future?

When President Bush made his grand tour of Africa last year, he had little to say about the land seizures and violent assaults on white farmers that the government of Zimbabwe's Robert Mugabe has carried out, nor did he insist that South Africa's president Thabo Mbeki do anything about it.

"I don't have any intention of second-guessing his tactics," Mr. Bush smirked to the press about what Mr. Mbeki would or would not do about the black tyrant next door who has managed to reduce Zimbabwe to the edge of mass starvation and genocide.

Mr. Bush no longer has any need to guess at all, since Mr. Mbeki himself may have started imitating Mr. Mugabe's policies in South Africa.

Last week, in what is probably the best report on what's gong on in South Africa in the American press in the last 10 years, the Washington Times showed how South African whites are slowly being dispossessed of their farms—and their lives. Having sniffed the insipid weakness of white leaders like Mr. Bush, Mr. Mbeki knows he has nothing to fear.

The Times reports that in the decade since the end of white rule in South Africa, "almost 1,700 farmers, nearly all white, have been killed on South African farms."  [Violence besets rural South Africa By Tom Carter, July 21, 2004].

Many whites are convinced the government is coordinating these attacks, though there seems to be little evidence of that so far, but one thing is perfectly clear: The attacks are motivated by race.

One white homicide investigator who denied the government was behind the murders is well aware of their racial pattern.

"If you look at what [the criminals] did, to these people in these attacks, there was hatred for white people. Black farmers have also been attacked, just not with the same brutality."

And brutality is the key word for what's happening to whites in South Africa. As the Times notes,

"Many of the killings were unspeakably brutal. Rape is common. One wheelchair-bound elderly woman was scalded with boiling water until she died. And the number of 'farm attacks'—where no one was killed—number in the tens of thousands."

The story begins with an account of a white farmer beaten to death with a stone—for "less than $3, a pair of pants, a pair of shoes and a wristwatch."

Nevertheless, things are getting better in the new majority-rule South Africa. Just after the end of apartheid, the country enjoyed the highest murder rate in the world—67 per 100,000 in 1994-95. Today it's only 47 per 100,000—about the same as Washington, D.C.

As for land, what's happening is frighteningly similar to what has already happened in Zimbabwe, where government-backed gangs of black thugs have simply moved onto white-owned lands, kicked off (or sometimes killed) the white owners, and taken over the farms—usually ruining the land in the process. The Times report recounts how one white farmer has witnessed some 40,000 black squatters take over 140 acres of his farm. He can do nothing about it—"I can't go in there. Too dangerous for me—they know me for who I am"—and the government will do nothing to get them off. It says the farmer must pay $262,000 to house the squatters somewhere else.

Similar seizures in South Africa have resulted in the loss of some 500,000 agricultural jobs, mostly by unskilled black workers, since 1993 as farms where they once worked have had to shut down. The government has resettled many blacks onto white-owned lands, "and have not been able to make a go and [the farms] are now vast rural shanty towns that are no longer producing' either food or jobs," the head of the South African Institute of Race Relations told the Times.

"The unskilled farmworkers who were supposed to be lifted up are being hurt the most," the head of the Agricultural Employers Organization said. "If the land issue is not handled correctly, it will be Zimbabwe all over again."

Which may be exactly what South African blacks would like. When President Mbeki was inaugurated last April, the visiting Mr. Mugabe "received a thunderous ovation from the overwhelmingly black crowd, only slightly less raucous than for Mr. Mbeki or his predecessor, Nelson Mandela."

What is going on in South Africa is not merely the exposure of the cheap hypocrisy of President Bush's gabble about "human rights" but the working out of the results of the century-long racial conflict that is being waged wherever whites are or have been dominant.

What we need to learn from what has happened in Rhodesia (Zimbabwe) and what is happening now in South Africa is that as the white future in the United States steadily darkens, their fate may be ours as well.