A White Alabama Reader Says That While We're Arguing Over The Battle Flag, Obamatrade Will Reduce Blacks AND Whites To Third World Status

From: Engineer in Alabama [Email him] 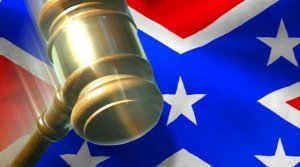 As I write this the mainstream corporate press is screaming about how racist the Confederate flag is (well, when they can be bothered to talk about anything other than gay marriage that is).

This is a false controversy.  It’s designed to stir us up, to set working-class American blacks and whites against each other, while the rich ruthlessly pursue their agenda of making themselves even richer at the expense of turning the United States into an overpopulated Third-World hell.

Both sides of the Confederate flag controversy are wrong.  The only sane approach to a heads-they-win tails-we-lose game is not to play.

The current “Confederate” flag was never the official flag of the Confederacy.  It was the battle flag of General Lee’s army.  On the other hand, while people seem obsessed with proclaiming General Lee a “gentleman”, it remains true that he was a traitor to this republic and he fought a bloody war against his fellow Americans in the defense of human slavery.  The flag would have remained sunk in obscurity until the KKK resurrected it.  So sure, the flag has some bad connotations associated with it.  However, currently it seems to be more a symbol of the South than any sort of racist statement.

Show me a flag that was never used as cover for something bad, and I’ll show you a flag that hasn’t been made.  America has not always behaved perfectly. There are, perhaps, many sins that were performed under the aegis of Old Glory. But also many good things.  If we banned the flag of every nation that never committed any sins, there would be no flags at all.  Instead of burning the American flag, we should acknowledge that America was not always perfect, but that it has also done much good, and endeavor to defend and improve the sacred honor of our nation.  Ditto for every other flag or symbol.

But so what?  None of this matters.  Suppose that the"liberals" win, and the rednecks say: well we didn’t mean anything hurtful, but we can see how the Confederate flag could be taken as an insult, so we’ll repaint our pickup trucks

with the standard American flag, and digitally remaster all those old “Dukes of Hazzard” episodes, and move on.  It wouldn’t matter!  Blacks in the inner city still would not have jobs, and as more and more of what’s rest of our industry is outsourced, and more and more third-world refugees are insourced, the black community – like the white community - will be reduced to the level of Haiti.

And it won’t even settle the issue!  The rich have a vested interest in keeping this conflict going.  If the Confederate flag is removed, they will move to attacking the American flag, or statues of George Washington, or apple pie… there is nothing that cannot be made into a false controversy, and the more ridiculous the better.

But suppose the "conservatives" win, and the Confederate flag remains available at Amazon.com.  So what?  Meanwhile our elected representatives have been busy selling us out for money, passing “Obamatrade” which will destroy our democracy and result in us being ruled by unaccountable corporate lawyers meeting in secret—and America, black and white together, will be driven down to third-world levels of poverty as the rich live in golden palaces a kilometer high.  Being able to paint the Confederate flag on your broken down pickup truck will be little solace, I should think

We should just ignore the entire issue, either way.  The real issues are Obamatrade, uncontrolled immigration, pointless foreign wars that serve only to enrich politically connected contractors, and a fiscal policy that throws trillions of dollars at Wall Street while starving the real economy of investment.

What would really scare our corrupt oligarchs, is if blacks and whites together said that they care more about jobs and wages and democracy than some stupid old flag.

Now wouldn’t that be a thing?