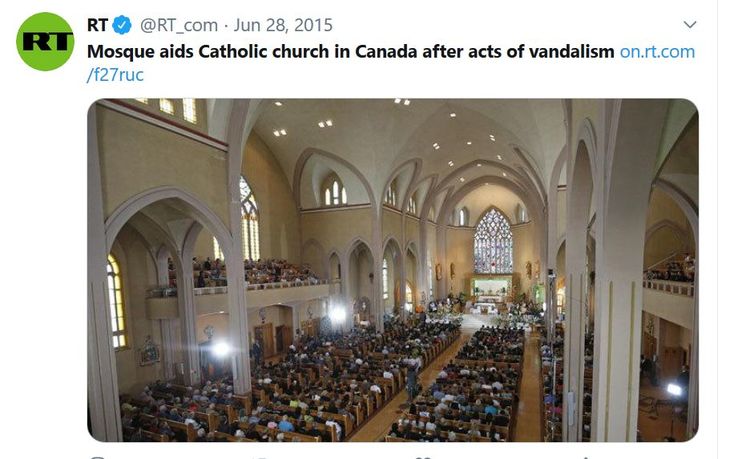 Here's the story, from RT.com: Mosque aids Catholic church in Canada after acts of vandalism, June 28, 2015

Look at the headline. Instead of "Local Muslim Man Vandalizes Church In Hate Crime", they spin it as "local mosque helps Catholic Church." Amazing that RT is taking its style tips from the mainstream US press.

Imagine the opposite: "Local Parish Helps Out Black Church" when the underlying story was a white guy vandalizing a black church. Not bloody likely!

In one case (white on non-white), the main story is the hatred of the white/nominally Christian perpetrator against non-whites/non-Christians; in the other (non-white on white) the identity of the perp is only an afterthought, a minor detail, and somehow it will be spun in a multicultural-friendly way.

Because  beheadings, bombings, mass-rape, pedophilia, destruction of ancient treasures, desecration of holy sites and general hostility to all non-Muslims is "not Islam," as the Idiot In Chief constantly admonishes. But mass murder of blacks in a church is apparently a fundamental element of Southern white culture, for which all whites shall stand guilty.

James Fulford writes: Here’s a précis of the story

Paragraph one: The Muslims are donating.

Paragraph three: The Imam is shocked at videos of vandalism.

Paragraph four: The shocking desecration is described, and the Imam is even more shocked—first reference to offender, as “guy who did it”.

Paragraph six, seven and eight: The Imam raises $5000 at his congregation, saying “there is no discrimination in charity.”

Paragraph nine: Imam gives money, saying “this is what any Muslim would do.” Er, why?

And here are paragraphs ten and eleven in their entirety:

Iqbal Hessan, the man arrested on suspicion he had carried out the acts of vandalism, said during the bail hearing that he was “upset with the Christian religion.”

The young man’s father told the court that Iqbal has been diagnosed with schizophrenia, and that’s what probably led to such behavior.

So only in paragraph ten do we learn that the church was desecrated by a Muslim, and we only learn this from the name—we are very specifically not told that Iqbal Hessan is a Muslim, like everyone on a planet Earth named Iqbal.

Then in Paragraph Eleven, we learn that his father claims he’s not doing this because of his religion, but because of schizophrenia.