A Unemployed Reader Describes Language Discrimination By A Chinese(-American) Bank

From: An Unemployed American Worker [Email him]

The East-West Bank says that it's an Equal Opportunity Employer, and that

All qualified applicants will receive consideration for employment without regard to race, color, religion, sex, sexual orientation, gender identity, national origin, disability, veteran status, or any other legally protected status. 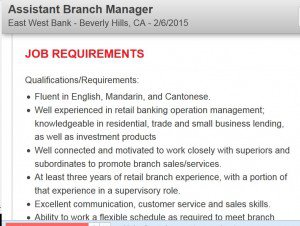 However, a Career Builder job opportunity for a local branch manager in downtown Beverly Hills, CA, says that it is a requirement that that you speak two kinds of Chinese:

A perfect reason why I can't find a job. Because I can't speak a foreign language in my own country!

Such as: Spanish, Chinese (Mandarin or Cantonese), Korean, Vietnamese, Hebrew, Farsi and Armenian!

This is the United States of America, not the United Nations! My first ancestor arrived here in 1611 at Jamestown in the Virginia Colony. Why should I have to take a back seat to all these people that show up from loser countries/cultures a week from last Thursday? I've been out of work since April! I'm FED UP!

Oh, and have a Happy New Year!

James Fulford writes: East-West Bank isn't a branch of an Asian bank, it's a "Chinese-American" bank, founded in 1973 as a savings and loan company "targeting the Chinese American community in Southern California" according to Wikipedia.

And apparently the Chinese-American community hasn't assimilated enough to do their banking in English. Of course, this is de facto racial discrimination—there are almost no whites fluent in even one kind of Chinese in America. (American blacks aren't bilingual at all, and find themselves nosed out of fast-food jobs for not speaking Spanish.)

For more on bilingualism, which Peter Brimelow has called a "ferocious attack on the living standards of the American working class" see