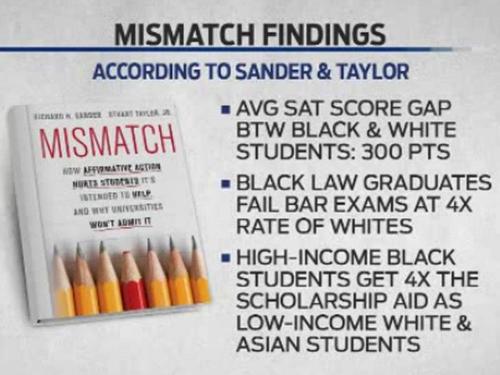 Paul Mirengoff seems to grasp the problem of blacks in college—they're not as smart as their white fellow students:

How should we explain the fact that black student militancy is now manifesting itself in the disruption of campus libraries and demands for postponement of exams? Here’s one plausible explanation: mismatch is to blame.

“Mismatch” refers to the fact that, due to aggressive race-based admissions preferences, many African-American college students fall short of the white students with whom they attend school in terms of the credentials most closely associated with academic success — high school performance and SAT scores. As such, they are less likely to succeed academically than their white counterparts. Through no fault of their own, they are running uphill (to the extent they choose to run).[More]

Despite all the goodies and special privileges provided by the universities, blacks remain unsatisfied. They want to be respected by whites, like the Magic Negroes they see on TV dramas. But they speak substandard English, and typical black ideas, such as the Pyramids having been built to store grain (from a Yale graduate) or Guam tipping over if too many Marines land on one side are met by laughter and derision by whites. Their frustration is that the universities have not turned them into Magic Negroes and that white students do not see the superiority of their unusual ideas and behavior.