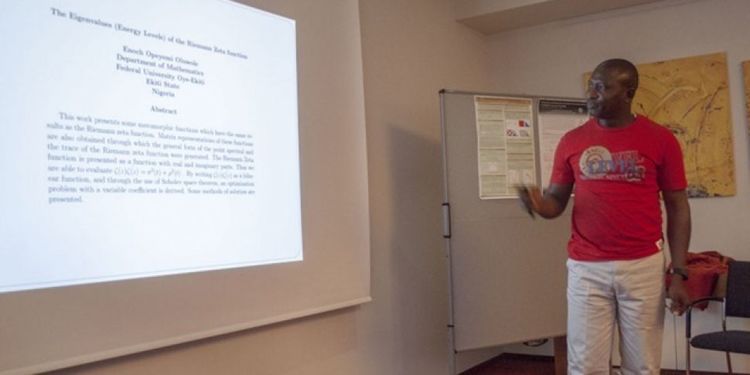 A Legal Professional Says The MSM Will Jump On Any Phony Story That Furthers Their Narrative: Nigerian Geniuses And Heroic Muslims Are Just The Latest

Not sure if you'd seen the reports of some Nigerian professor allegedly resolving the notoriously vexing Riemann hypothesis by offering a mathematical proof.

Being a regular reader and listener to Mr. Derbyshire, I found it astonishing that such work was being done in West Africa, and further, that it was achieved by a man relatively old by mathematician standards. But there was something about it that just didn't seem to jibe with all I thought I knew about the world. Perhaps it was a tinge of shame at the notion of being surprised that an African could achieve such a feat.

I thought, "good for him," though in forwarding it to a lefty "true believer", I expressed some skepticism, and also noted that more telling than the professor's singular achievement was the reaction of at least some of his countrymen, whose interest in mathematics probably ends with coming up with a believable sum to put in their bogus emails to gullible white westerners concerning an unclaimed inheritance or a yet-to-be-redeemed lottery ticket.

Well, a little searching turned up this:

Rumors are swirling that Opeyemi Enoch, a professor from the Federal University of Oye Ekiti in Nigeria, has solved the Riemann Hypothesis, a problem that has vexed mathematicians for over 150 years. Too bad it’s not true.

As reported in the BBC, The Telegraph, Yahoo! News, and many other publications, the Nigerian professor is claiming to have solved the problem, thus making him eligible for a $1 million dollar prize. Enoch has yet to make his solution public, so his claim has yet to be verified.

Unfortunately, it looks like in this case it’s not a real proof of the Riemann Hypothesis, and this post on a Nigerian discussion forum says emphatically he has not solved it. As mentioned in that post, there’s a paper on academia.edu under his name, which is actually a copy of a paper by someone called Werner Raab (retired). Raab’s website – http://www.raab-math.at/ is empty, and has a single broken link to “the truth of the Riemann hypothesis”. Some digging reveals that that URL has never worked. [VDARE.com Update: Link here, the broken link was a spelling error. Thanks to Glaivester for pointing this out.] Confusingly, Enoch seems to be gathering papers about the Riemann Hypothesis on academia.edu under his own name.

Sorry, the Riemann Hypothesis Has Almost Certainly Not Been Solved

Suddenly, everything snapped back into focus, all was again right with the world, and Derb can continue to cite the Fields Medal winners as a compelling argument. Perhaps this was just a more sophisticated 419 scam?

However, we should still be troubled by the uncritical, credulous manner in which this was reported by the "mainstream press." It brought to mind the other recent gaffe, first committed by the WSJ, then dutifully picked up by (naturally) Huffpo and the tabloids:

A compelling story about a heroic Muslim security guard stopping a suicide bomber from entering the Stade de France on Friday, saving perhaps hundreds of lives, is making the rounds on social media. But it's not true.

It becomes quite clear that they will jump on any story they stumble across which will help further their narrative, be it "race does not exist", achievement gaps are all due to the legacy of slavery, Jim Crow and "white privilege", and Muslims pose no threat whatsoever to us in the west, and these barbarians we see enslaving, raping, beheading and slaughtering are not "all" Muslims, so shame on you for suggesting that our countries shouldn't be flooded with them...  If the story furthers the narrative, why bother checking the facts?