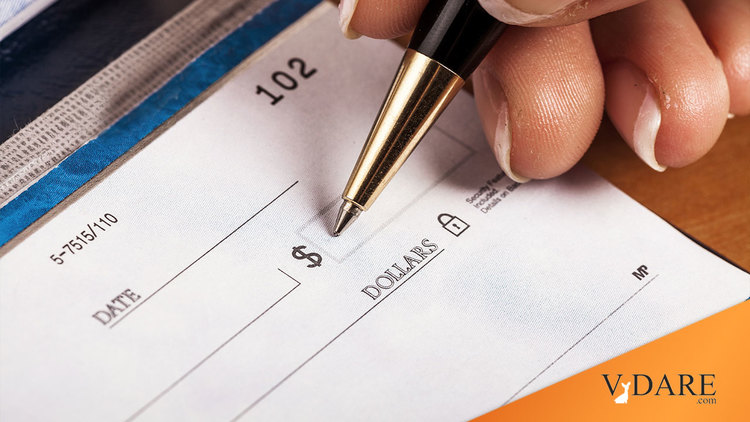 A Southern Reader (And Donor!) Wishes Our Writers Would Lay Off Planned Parenthood

Re: Michelle Malkin’s syndicated column "To Stop the Multiplication of the Unfit"

From: Kit Brewer [Email him]

Does VDARE.com embrace Michelle Malkin's distaste for Planned Parenthood?  If we cannot stop the massive immigration of the "unfit" into our country, we should at least be prepared to counter their attempt to take over our country via the maternity ward.

I would define "unfit" as anyone who must rely on government assistance, be it food stamps, free health care, rent subsidies, etc. for more than one year.

I would go further and suggest that mothers and fathers who have at least one child, and want to receive government assistance for an extended period, undergo mandatory and permanent sterilization to receive the benefits.  This would apply to all races and would stop the proliferation of white welfare queens in Appalachia (where I live) as well as black welfare queens in our country’s ghettos.

I have had enough.  I don't mind buying groceries and paying doctor bills for productive people who have fallen on hard times, particularly hard times induced by government lunacy.  But I'm now required to buy cell phones for the poor.  Seeing as how I, myself, don’t own a cell phone because I consider them unnecessary, providing cell phones to the poor is particularly onerous to me.

If Obama is able to flood the country with enough immigrants, and they are able to vote, I strongly suspect I will be forced to pay their cable TV bills and buy them big screen TVs.

I put my money where my mouth is.  I matched the small donation I gave VDARE.com with a donation of the exact same amount to Planned Parenthood.

I give slightly more money to the local humane society, Tiger Haven (300 big cats), and Elephant Sanctuary.  I will soon write a check to Appalachian Bear Rescue.  As you might surmise, I have more sympathy for animals trying to survive our insanity than irresponsible humans to have brought us to this point.  Because of their vitriol against Planned Parenthood and their support of the Catholic Church, I  Include Michelle Malkin and Pat Buchanan in  the "humans who have brought us to this point" category.

P.S. In spite of that, when I see that Pat Buchanan has just been fired by MSNBC, I realize that Fox News and MSNBC are united by one trait— hatred of the white middle class.  To the multiculti Marxists at MSNBC, we are the spoiled bourgeois; to the neocon Fox poobahs, we are merely “overpaid labor."  I will miss his defense of the white middle class and the culture that gave it birth.

James Fulford writes: We have diverse opinions on VDARE.com—except on the need for patriotic immigration reform. The syndicated columnists are sometimes in line with our focus, sometimes not, but we always publish them anyway. However, Donald A Collins and Brenda Walker are more in our reader’s way of thinking.

As far as Michelle's eugenics worries go, I've discussed this here: "Eugenics" Is What Happens When Cousins Don't Marry.

My point in that article is that while nobody wants the government to start licensing births, because it would be handled by either (A) the post office, or (B) Eric Holder, all policy decisions which affect births must necessarily have either eugenic or dysgenic effects.