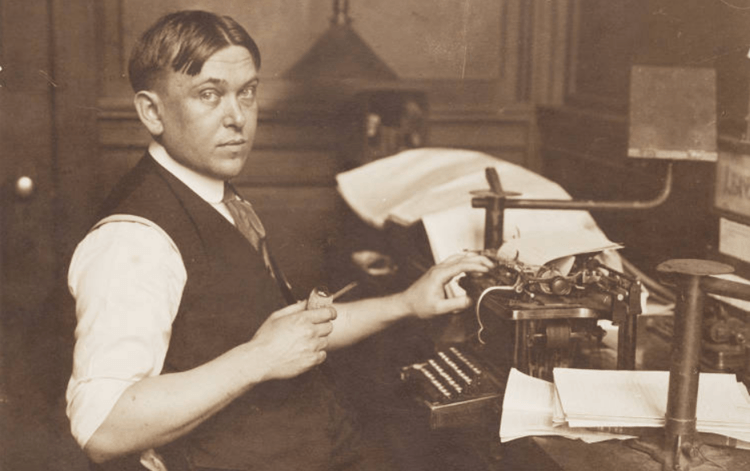 Of Mencken and Micropolitics 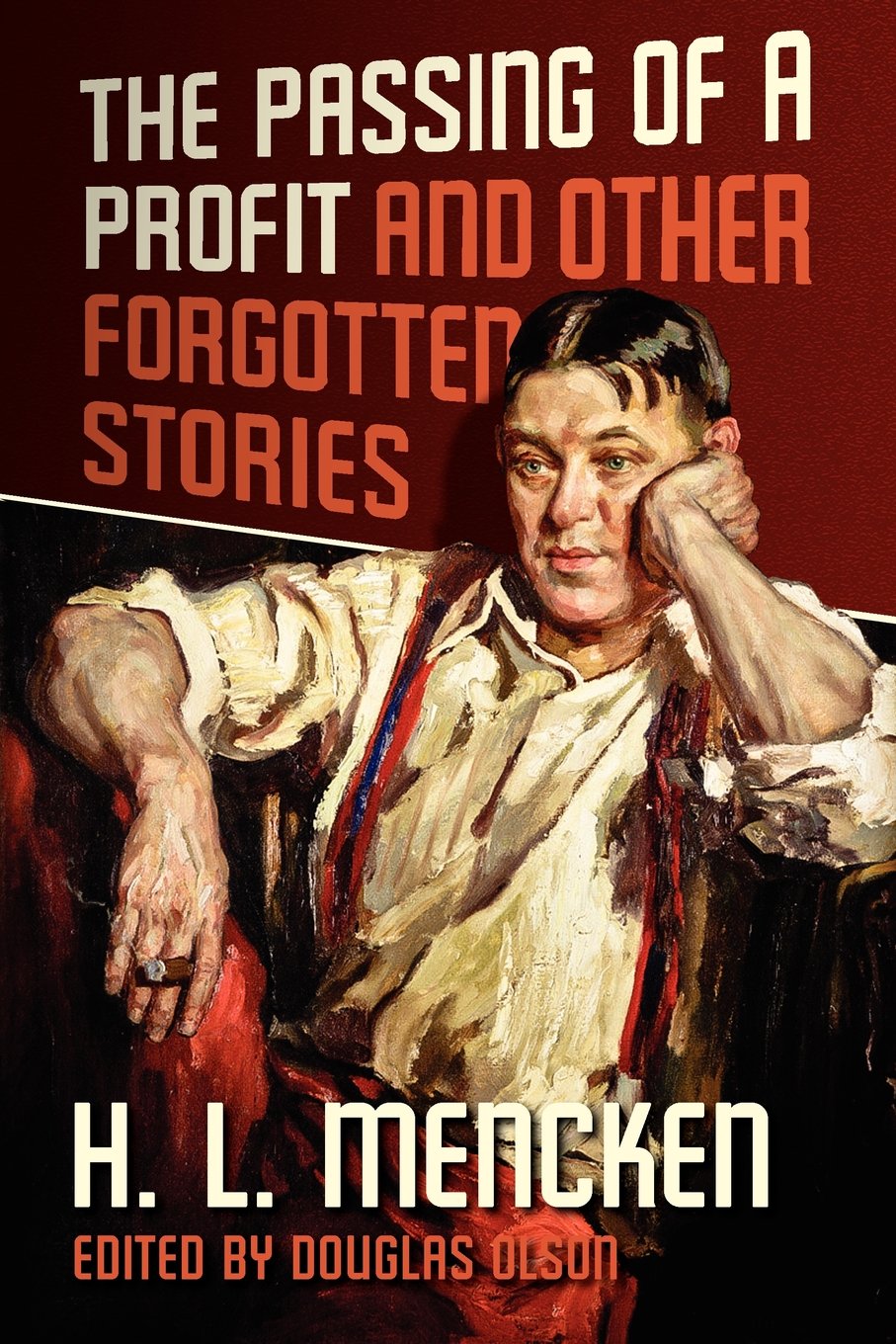 The rise and fall of nations and cultures is too abstract for most people. But fiction, especially that informed by journalism, can shows how the sweeping patterns of history play out the micro level. Individual stories can be just as informative as any grand history of the clash of civilizations.

H.L. Mencken, who died 57 years ago this week, was the greatest newspaperman of his age, or perhaps of any age. He shaped the thought of a generation with The American Mercury (now available online thanks to Ron Unz). He changed the way Americans viewed the way they speak with his book The American Language . Most critically, as the author of the first English-language book on Friedrich Nietzsche, a champion of free speech and of a kind of idiosyncratic aristocratic radicalism, Mencken has been an important influence on the libertarian American Old Right and the emerging North American New Right.

A new collection of Mencken’s early fiction, The Passing of a Profit and Other Forgotten Stories

, provides a vital perspective on his vanished world.

Motifs run through these seventeen tales that were developed further in Mencken's public writings and private diaries. Among the most important: the confrontation between the civilized Western man and the savage. Like his contemporary H.P. Lovecraft, Mencken identified what he called the “civilized minority” with Northern Europeans. But it's not a perfect association—Mencken's contempt for the socially conservative and rural “Real Americans” of the Sarah Palin mold is well known.

And this collection can hardly be called racist. For example, “The Cook's Victory” is a hilarious recounting of a black cook winning a pardon from a poaching ship captain who wants to execute him for “mutiny.” His victory comes from the captain's need for his help as the police approach, slowly gaining more and more concessions, finally winning his freedom just as the captain makes good his escape. In “The Crime of McSwane,” a white soldier fighting in a colonial war loses his rifle and goes mad at the reduction in status, encouraging his comrades to die so he can reclaim his position. Other stories show Northern Europeans coming out on top of Southern Europeans or non-white “natives,” but often as a result of swindling or fraud—hardly an edifying picture of the “civilizing” power of Western Man.

Still, even in negative stories, there's a fierce consciousness of status entirely absent from contemporary Europeans. There's something bracing about tale after tale of laughing and confident British, Germans, and especially Americans casually striding through the Third World like swaggering colossi, changing entire societies on a whim.

In “The Heathen Rage,” a German swindler makes his way to Jamaica and exploits an old royal land grant to a Major Johann von Braun to convince black Jamaicans named “Brown” (which is to say, lots of Jamaicans) that they are entitled to estates. The result is chaos, as the swindler gets more and more legal fees and donations from his prey while feeding them pseudo-legal claptrap about the Magna Carta. Eventually, the minor insurrection is put down, but the German escapes with the cash.

In “The Defeat of Alfonso,” in contrast, two American dentists who have set up shop in Ecuador easily outwit a “Castilian” competitor who tries to rob them. They send him scurrying off like a child, after a kick from a “shoe that bore the imprint of a manufacturer in Jonesville, Connecticut.”

Two other Americans who have set up a theater in the Antilles are able to defeat an honor-conscious “Señor” through sheer daring, chasing him down in the dark of night. However, even another “Señor” represents a higher order of civilization than the “fifty colored gentlemen” in “A Double Rebellion.” Mencken notes wryly that “the dark skinned Anglo-Jamaican, be it known, reckons no further in the future than the morrow.” Following a mutiny, the Mexican pilot of the ship is forced into steering the ship, but manages to create such a disruptive voyage that the mutineers leap off the ship in terror, screaming prayers to their pagan gods.

Sometimes, the Other thinks that Western men behave the same way, as in “Hurra Lal, Peacemaker.” A doomed native rebellion ends without bloodshed when an Indian living in Jamaica, who has observed Her Majesty's pith-helmeted legions, appeases them by screaming “God Save the Queen” as if it were a magic formula, not really knowing what it means. The appeal has its intended effect: the grinning white officers show mercy to the defeated.

In each case, we are presented with a mirror image of the micro-racial politics of today, with Western men confronting the Other without fear or guilt.

However, what is most remarkable for immigration patriots is the attitude of Americans towards their government as they have their lurid adventures abroad. In every story, citizens of the Republic (even scoundrels) are confident that there is a strong government that has their back and will ensure their rights are not violated by foreigners.

In “The King and Tommy Crips,” which no parent can read without grinning, a patriotic little boy (are there any now?) is abroad with his father in one of the lesser German kingdoms. Heartbroken at missing the Fourth of July while stuck in a snooty European city where no-one speaks “real English” or follows baseball, the boy resolves to have his own celebration. He throws some firecrackers during a parade for the king. This is interpreted as an assassination attempt by anarchists.

The king is amused when he finds out the truth, and the boy is ashamed of his disruption. But his innocent warnings to the king after being threatened with jail show that, a century ago, even a child knew what it meant to have a country:

“Did you ever see the battleship Oregon?... she goes around helping Americans. If one of them is robbed or gets into jail in a foreign country, she comes along and gets him out. The government keeps her for that.”

In the eponymous “The Passing of a Profit,” two feuding American gamblers detained in Mexico confidently expect freedom and swift punishment for the Mexican government once the American consul arrives. However, in a twist, the consul turns out to be a naturalized Mexican—an early example of a Raul Grijalva,who holds a US passport but is indifferent towards his supposed country. He still secures their release, but only after a bribe. The chastened Americans realize they would have escaped with earnings intact if they had shown a united front. They shake hands and conclude “In unity there is strength.”

Even when the U.S. government is not directly involved, Americans abroad know that they represented a real people. In “Firing & a Watering,” American miners are accosted by a band of would-be Central American revolutionaries who demand their surrender. Instead, the expatriates raise the Stars & Stripes in defiance, inform their “dago friends” that they've booby-trapped the river, and eventually use a high-powered hose to defeat los insurrectos in humiliating fashion. Government forces arrive to take credit for the victory and the triumphant Americans laugh good-naturedly. In the “Star Spangled Banner,” a French singer tries to put one over on Americano workers in Latin America by singing insulting Spanish lyrics to the national anthem. Of course, at least some of the Yankees know Spanish and chase him through the jungle for ten miles seeking vengeance.

The Passing of a Profit and Other Forgotten Stories is more than a new side of H.L. Mencken: It shows cultural assumptions dramatically different than those of today. What James Burnham called the Suicide Of The West now plays out in conversations and business dealings of ordinary people.

Today, Western men will strip to their underwear at the behest of nonwhite rioters in London. An American imprisoned abroad, even a United States Marine, knows that his government is essentially indifferent to his fate. Rather than defending its citizens, the American government will sue them on behalf of foreign governments or even arrest them to spare the feelings of the Third World. The Stars & Stripes symbolizes a government actively hostile to the people who built the country.

Mencken's fiction is valuable not just because it's an enjoyable way to spend an afternoon with one of America's greatest writers. It's a way of showing individual people why they should care about the larger issues.

Shifting demographics and metapolitics aren't just about the political direction of the country—it's about how we have to live our lives every day.