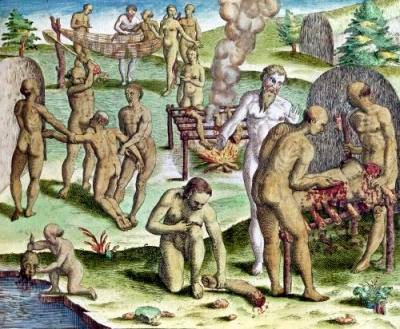 Re: James Fulford's article Hello, Columbus! The Day When Hate Speech Is Okay

On the Washington Metro system timetable for holidays Oct. 12 is Columbus Day, in Spanish it's "Day of Indigenous Peoples".  That being the case, why in Spanish, a white European language, instead of an aboriginal dialect like Quecha, wouldn't that be more appropriate for "indigenous people"?

The indigenous people encountered by Columbus were not living in an unspoiled Paradise—here’s a quote from Samuel Eliot Morrison’s Admiral Of The Ocean Sea:, p.407

“The searching party found plentiful evidence of these unpleasant Carib habits which were responsible for a new word—cannibal—in the European languages. In the huts deserted by the warriors, who ungallantly fled, they found large cuts and joints of human flesh, shin bones set aside to make arrows of, caponized Arawak boy captives who were being fattened for the griddle, and girl captives who were mainly used to produce babies, which the Caribs regarded as a particularly toothsome morsel.”

That’s the kind of history they no longer teach in school.