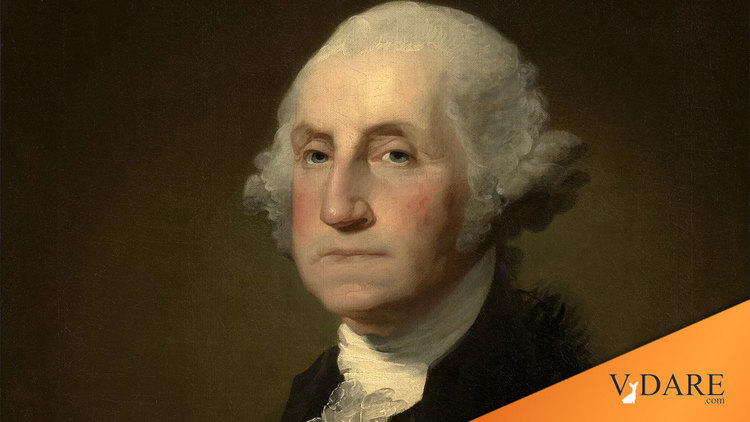 A Reader Says A Bushman Is Wrong On The First George W. and Immigration

Eduardo Aguirre, the Director of Citizenship and Immigration Services at the Department of Homeland Security, recently gave a speech at the Nixon Center.  The speech was called "Civic Integration:  Citizenship after 9/11" and included some laudable objectives regarding how best to assess and ensure the fidelity of prospective naturalized citizens.

However, what caught my eye was Mr. Aguirre's arguments regarding how immigrants continue to "enrich" the United States.  First quoting Emma Lazarus's now-clichéd lines about the poor, huddled masses, Mr. Aguirre then turns to an unexpected source:  George Washington!

According to Mr. Aguirre, "we are today, as much a nation of immigrants as we have ever been.  America's founding fathers knew this would be. George Washington, in his farewell address, noted 'Citizens by birth or choice of a common country, that country has a right to concentrate your affections.'"

What is interesting about this quote is the portion that has been omitted.  President Washington continued as follows:

"Citizens, by birth or choice, of a common country, that country has a right to concentrate your affections. The name of American, which belongs to you in your national capacity, must always exalt the just pride of patriotism more than any appellation derived from local discriminations. With slight shades of difference, you have the same religion, manners, habits, and political principles."

It is certainly questionable whether the Somali Bantus, or Vietnamese Hmong, or other refugee groups that the U.S. Government seems to wish to import into the United States, share, in Washington's words, "the same religion, manners, habits, and political principles" as those of the more traditional American groups.

The same may be asked of the millions of illegal immigrants from Latin America now residing in this country.

I am not sure, but it seems likely that George Washington, if he were here, might disagree.