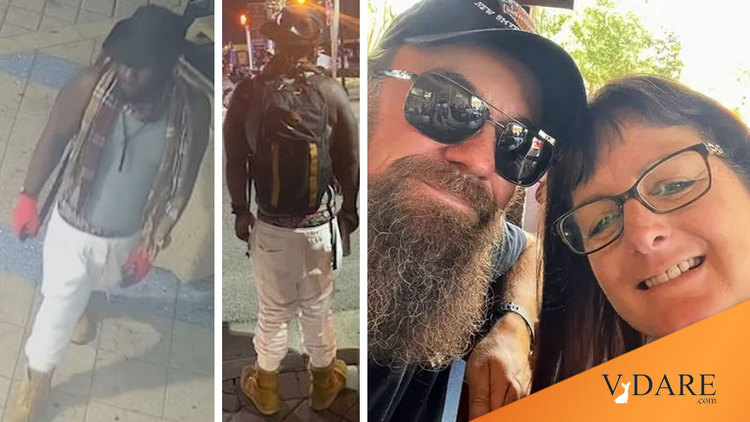 A Reader Reports A White Married Couple Stabbed To Death In Daytona Beach...Allegedly By A Black Suspect

Here's another murder, where the color of the person of interest is not mentioned, nor are the victims shown by CBS.

A married couple was found dead on the side of a road after being stabbed to death while riding their bicycles home, authorities in Florida said Monday. Daytona Beach Police said they were still searching for a suspect on Tuesday and released surveillance video showing a "person of interest."

Officials said the video shows a man walking along the street just after midnight Sunday. He is wearing a gray tank top, beige scarf, white pants, red gloves and a black cowboy hat. He is also seen wearing a backpack.

Turns out the victims were a white couple. And the person of interest black.

The article did post a link to the police twitter page, so they did have the opportunity to show his pic in the article to help recruit more people to identify him, but they would rather act like they don't have a pic.

We're looking for this man in connection to the murders of a married couple this past weekend. He is a person of interest.#DaytonaBeach #DaytonaStrong #DBPDStrong pic.twitter.com/3vtWj0a6F7

James Fulford writes:  Fox News has better pictures, and they actually identify the alleged perp as black. (They say Black, with reverential capitalization.) They don't identify the victims (Terry and Brenda Aultman) as white.

#BREAKING: Daytona Beach police have released video of a person of interest in the stabbing death of a married couple over the weekend. Police say Terry and Brenda Aultman were stabbed to death and had their throats slashed while riding bikes on Sunday. https://t.co/rZo30aCkNS

As I've been pointing out for years, the AP Stylebook says

In biographical and announcement stories, particularly when they involve a feat or appointment that has not routinely been associated with members of a particular race.

I. e., the "first black" to do something good is relevant. The thousandth black to commit an armed robbery—or a double murder—is not.