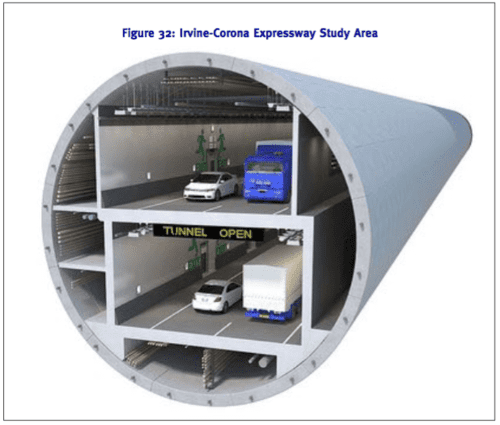 A Reader Points To A Proposal To Spend $700,000,000,000 To Deal With Traffic In SoCal—Deportation Would Be Way Cheaper

Their latest study on "Increasing Mobility In Southern California"[PDF] proposes a huge infrastructure project in the shape of a tunnel, above, to deal with the population growth, all of which comes from south of the Border.

But what if we just went ahead and built more roads, especially loads and loads of tunnels crisscrossing the mountains and other obstacles? That, essentially, is what a new study from the Reason Foundation is proposing.

That's right, a libertarian think tank is proposing a $700 billion public works program. Up is down, black is white, dogs and cats, etc.

Of course, that's just the  temporary cost, more investments will be needed later without a change in invasion policy and not just for roads but water, power, sewer and food, yes, food. America is a net food importer so every new resident will need a new food and water supply in addition to all the other stuff humans need and energy.

You can't use solar to make solar (if you could,  solar companies would) its a net energy loss compared to coal.

Or we could just enforce federal immigration law and limit citizenship birthrights to citizens and limit immigration.

Everybody in LA remembers the "Day Without A Mexican" (mass boycott in 2006) it was CA best traffic and smog day since the Olympics.