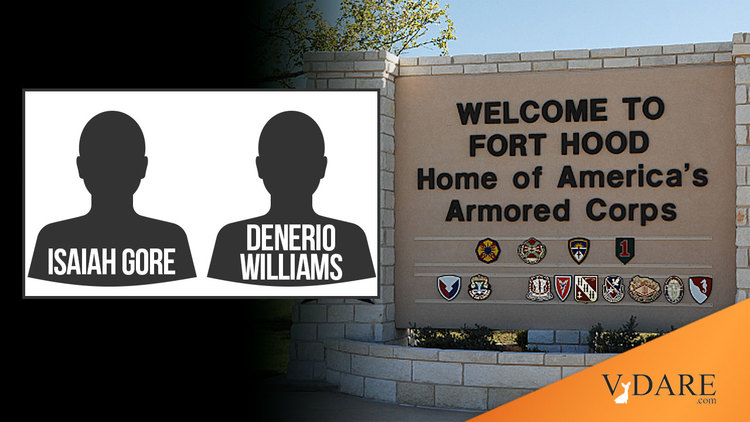 A Reader Notes That Active Duty Soldiers Arrested For Smuggling Illegals At Fort Hood Aren't Hispanics, But Africans And Haitians In American Uniforms

From: Ward Hanover [Email him]

I don't know if you've already seen it but some soldiers from Fort Hood were busted smuggling illegal aliens into the country. I couldn't find mugshots but based on their names, I believe they're all black (i.e., Haitian surname, African surname, American black sounding first name of "Denerio" and then two other NBA sounding first names of Isaiah and Ivory). News stations are refusing to show mugshots now, so you have to make assumptions.

Since open borders is practically official U.S. policy at this point, I'm surprised these soldiers got prosecuted and weren't issued medals instead!

Saint-Joie has been identified as an active duty member of the U.S. Army while Oppongagyare is from the Pennsylvania National Guard. At the time of arrest, each noted they were stationed at Fort Hood.

On June 13, Oppongagyare and Saint-Joie attempted to go through the Border Patrol (BP) Checkpoint in Hebbronville wearing their army-issued uniforms. Upon inspection, authorities discovered two individuals hidden in the trunk who were determined to be in the country illegally. Authorities promptly took them and the soldiers into custody.

The investigation began June 13, 2021 when authorities caught Emmanuel Oppongagyare and Ralph Gregory Saint-Joie smuggling undocumented migrants in the trunk of a vehicle at the Border Patrol checkpoint in Hebbronville. At the time of arrest, both men were wearing their U.S. Army uniforms.

Oppongagyare later admitted Gore recruited them to pick the migrants up from McAllen and drive them to San Antonio...

A joint investigation later confirmed Oppongagyare, Saint-Joie, Williams and Palmer each served a role in the conspiracy as drivers who would travel to locations in Texas to transport the aliens in exchange for money.

James Fulford writes: When a Jamaican in the U.S. Army was arrested for murdering a young white soldier, I asked How Did Alleged Killer Jamaal Mellish Get From Jamaica To The US Army?

Similar questions can be asked here.