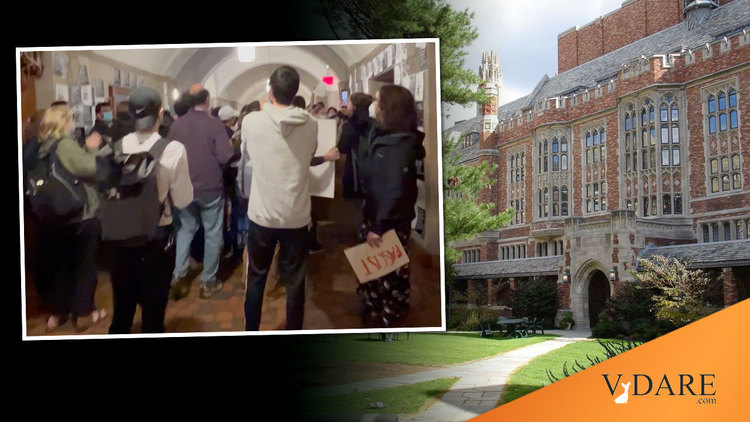 From: A Top Ten Law School Graduate [Email him]

After the usual kind of riot at a Yale Law School panel on free speech (protesters were FURIOUS that Georgetown law prof Ilya Shapiro had blasphemed against affirmative action nominee Ketanji Brown Jackson) Judge Lawrence Silberman wrote in an email to other judges:

The latest events at Yale Law School, in which students attempted to shout down speakers participating in a panel discussion on free speech, prompt me to suggest that students who are identified as those willing to disrupt any such panel discussion should be noted. All federal judges—and all federal judges are presumably committed to free speech—should carefully consider whether any student so identified should be disqualified from potential clerkships.

[Is Free Speech In American Law Schools A Lost Cause?, by David Lat, Original Jurisdiction, March 17, 2022]

But of course, they haven't been "identified" or doxxed by the Yale administration or the MSM.

All Yale Law students are being collectively punished for the extremist activities of a handful of anti-American activists, through denial of judicial clerkships. Thus it would be beneficial to the silent majority for those responsible for disrupting classes and talks to be identified. Some of them may not even have been students at Yale Law School.

Even though photos and videos of the trouble makers have been posted online, they remain unidentified.

In the past, the names, colleges, and home towns of all Yale Law students were listed in the back of the course catalogue. I have no idea whether that is still the case.

It would also be interesting to know the ethnic and gender makeup of the protesters. From the online videos, they appear to be mostly women—fat, ugly white women. (See Rush Limbaugh’s Undeniable Truths of Life, number 24: “Feminism was established so as to allow unattractive women access to the mainstream of society.”)