A Letter From Almost (But Not Quite) Whitopian Bloomfield Hills

From: A Bloomfield Hills Observer [Email Them]

What with the full-scale race riots of late, there's been a fairly amusing sideshow here in Bloomfield Hills, Michigan that's exposed the horrific Cultural Marxist/ethnic grievance-monger mentality infiltrating our schools. 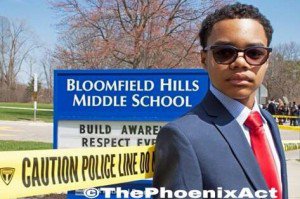 So, it began when a high-school kid named Phoenix Williams (right) was supposedly called the n word on a school bus:

He recorded a video of other kids supposedly taunting him, but never released an unedited version of the video so it's really unclear what, exactly, happened.

This admittedly unfortunate occasion could've been dealt with privately amongst families, but Phoenix's mother Shanari (right) saw visions of viral victimhood, fame and fortune ahead! (I have no doubt that but for the Freddie Gray rioting, the National Action Network and all affiliates would've caught the next plane to Detroit).

Shanari Williams then installs Phoenix's stepdad—her current hubby—as the family's “media and business representative” and president of something called the Phoenix Rising Foundation, an organization whose nascent goal is “teaching racial tolerance”.

She's kept her son out of school for months and apparently spends the days Tweeting #WeAreAllPhoenix and #protestbloomfield at @ThePhoenixAct.

Then there's been a lot of this:

There was a recent meeting of the Bloomfield Hills School Board to deal with this issue, and I was there to witness the entire grim and highly ridiculous spectacle.

The school board had brought in a woman to lead the meeting whose professional title was 'Institute for Healing Racism Head Facilitator”, who first bragged about her friendship with activists like Mike Klonsky and Bill Ayers and then went on to tout her “incredibly dangerous and very, very risky” work indoctrinating white grade-school kids to hate themselves. (She was visibly white and Jewish, but went on to whine about the “endemic racism and oppression” she suffers as a “woman of color”).

The meeting was overcrowded with assorted flotsam and jetsam associated with the “Bloomfield Hills African American Family Network”, Phoenix Williams' family and friends, and the local NAACP—said groups which apparently exist for no reason apart from Mau-Mauing. [VDARE.com note: Bloomfield Hills is 20 miles from Detroit, and less than 5 percent black—most blacks in the area are middle class.]

There was (and of course this was not mentioned in any local coverage) a black dad with kids in the district who loudly proclaimed to the TV cameras in the room that "Ben Franklin and Christopher Columbus aren't the faces I want to see in the history book", faces which stare evilly back at him in an evil Puritan plot to diminish the "solidarity" felt amongst those maligned folk who experience "intersectionalities of oppression". I almost walked out when he finished with "...and where are the counter-narratives to those already here before Columbus?" (This guy turned out to be a public school teacher, too. I don't have kids yet, but with teachers like these, I'm tempted to start planning the homeschool curriculum.)

Various moms stood up to ask those assembled to “understand (her) feelings as a mother of African-American male(s)” who “cannot function within Bloomfield Hills” because of the disproportionate discipline, “structural racism”, “endemic police brutality” and so on and so forth.

I heard, many times, that because these families were nominally middle class and comprised of “brilliant black people” (direct quote) there's no such thing as a genetic achievement gap between races—it's actually “systemic racism and lack of inclusive sustainability within our community”.

According to the ex-Weatherman woman running the meeting, if kids whip out their phones to film every perceived slight then the “systemic microaggressions” allegedly pervasive within the school day may finally cease.

The meeting concluded with Shanari Williams verbally mocking and attacking the lone white male on the school board, because “he was laughing at me” (he wasn't—projection much?) and then telling him to “check himself” because “she did a great job raising Phoenix to be a world citizen” and “old bullies like you don't run the show”.

Things wrapped up with the promise of a fully-funded “task force” on racial solidarity and more promises to instill racial quotas for future district hires, instill mandatory K-12 racism “awareness training”, and general narcissistic racial fulfillment all around.

What is to be done?