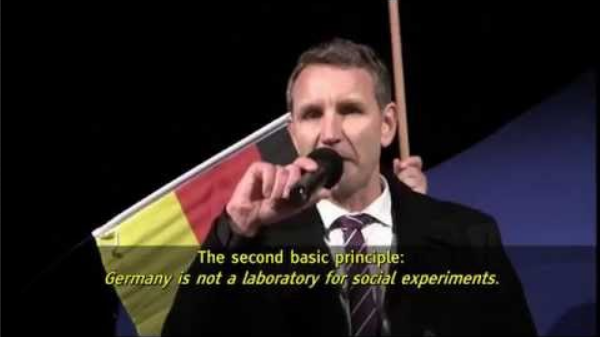 From: Patrick Cloutier [Email him]

You will recall that I told you many weeks ago, that Syrian and Muslim refugees are being housed on German military bases. In this YouTube video, German nationalist representative Bjorn Hocke tells the crowd at 19:00 minutes that the German Army is being forced to evacuate its barracks, so that the Muslim refugees can move in.

I cannot tell you how angry it makes me that I gave you this information on December 1, and you have not done anything with it.

I will continue to read VDARE.com, but I cannot think to bother myself to contribute again, in light of the incompetence VDARE.com demonstrates, when given timely and time-sensitive news.

Patrick Cloutier is the translator of Raciology (reviewed here) and the author of several books of military history.

James Fulford writes: We're grateful for news tips, but can’t use all of them—we haven’t got the resources.

Also, I don’t know if the fact that the German Army’s barracks are being used for Muslim refugees is that earthshaking—much the same thing has happened in American military bases (see Military Bases: Obama’s New Illegal Alien Dumping Grounds and Republicans Fight to Protect Military Bases–How About Protecting the Whole Country?) and exactly the same thing has happened in Canada. Canada: Military thrown out of barracks to make room for Syrian refugees, Refugee Resettlement Watch, November 24, 2015.

I can only say that while we occasionally get letters from dissatisfied readers who are giving up on us, we're not giving up. We plan to be here with or without them.