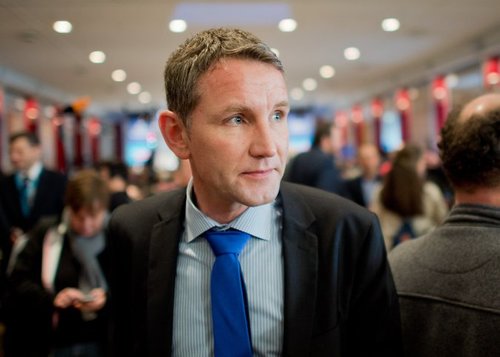 NYT: "The New Face of Racism in Germany"

The New Face of Racism in Germany

Berlin — GERMANY is not lacking in right-wing sentiment these days, but most people are careful about how they deploy their anti-immigrant rhetoric. And then there’s Björn Höcke.

Last month Mr. Höcke, a leading figure of the right-wing populist party Alternative für Deutschland, gave an openly racist speech on the “differing reproductive strategies” of Africans and Europeans. It was not the first time he had drawn on National Socialist themes, but this time he caused uproar, even in his own party, which has asked him to resign his membership.

Or maybe Hocke was reading the Washington Post, which published this graph:

Same with my graph based on the 2015 United Nations World Population Prospects:

But graphs are hateful and are only looked at by the hate-filled.

Whatever happens to Mr. Höcke, though, his willingness to use overtly racist language has revived an age-old fear in Germany. He is, by all accounts, a typical German, an upright middle-class citizen — what we call a “Biedermann.” They are the core of our national self-perception. If they turn to the dark side, what does that say about Germany?

For years, racism and hate in Germany mostly came with clear social markers. In the minds of most, racists wore their heads shaved, feet heavily booted and arms rune-tattooed. They lived on the fringes of society, often in public housing, and made their living illicitly.

Not so Mr. Höcke. As a young man, he was a member of “Junge Union,” the youth organization of Chancellor Angela Merkel’s center-right Christian Democrats. He’s a high school history teacher on leave and a married father of four. He lives in the countryside and is invariably well dressed, though never in a showy way.

Is this the new face of hate in Germany?

You know, if you want to have a good debate on a crucial policy that will determine the future of Germany, it’s probably a wise idea to have both sides be represented by respectable people offering informed views.

But if you don’t want to have a real debate and just want to impose your policy autocratically, then it’s ideal to restrict the side you want to lose to being represented by soccer hooligans.

Of course, that raises the worry that if all the respectable people aren’t allowed to discuss in public the fate of the nation, then the only ones who can participate in this crucial policy debate, the hooligans, might just win the debate and come to power.

Is that worth risking over migration policy? Apparently, a lot of respectable people in Germany think so.