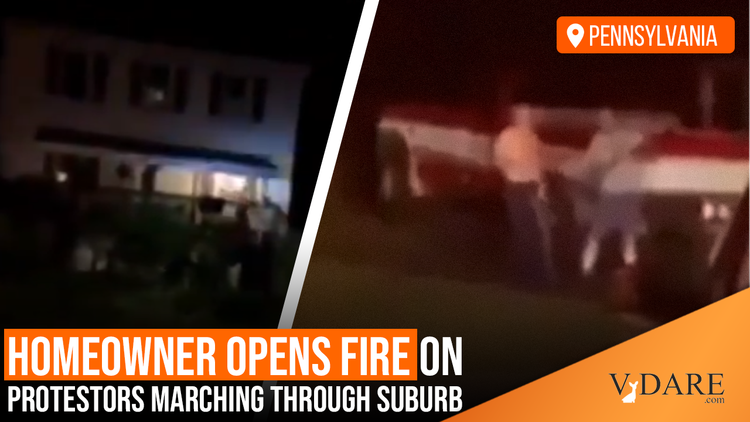 A Pennsylvanian Writes With Local News Of Shooting In Bedford, PA

From: An Anonymous Rural Pennsylvanian [Email him]

It's calm now. The group of 30-50 is walking/driving from Milwaukee to DC.  They came over Rt 30 from the west side and stopped at the Myers garage at about 11:00 at night and began milling around because there's a wide spot to park. Myers lives across the street and called the PSP at 11:18 upon seeing a (for the time and place) huge crowd of people.

Response times are terrible and 20 minutes later, no police were there yet. Someone from the house went outside and apparently fired a warning shot and told them to leave. This, by the way, is not legal.

Someone from the crowd returned directed fire at the Myers home and Myers, or a family member, shot a protester with birdshot causing a minor wound.

The crowd dispersed and the news cycle began.

All of this was posted to social media and followers of the demonstrators began doxxing the Myers family online, posting pictures of the home, garage, etc., with comments about effecting "hood justice" and things like "it'd be a shame if their house disappeared" and "antifa should come to town and burn down their courthouse."

Later the next day, the protesters were at the Hampton Inn by the Bedford interchange and were live streaming about their outrage and divulging their location, and the social media pot had been stirred. Some local clowns (including a convicted felon) showed up and drove around the hotel being assholes. The aforementioned convicted felon shot some 9mm rounds off in the air and left. Police apprehended him a short time later and it turned out it was illegal for him to own a gun, and he'll face lots of serious charges and likely go to state prison.

At the same time, a large, peaceful group of locals assembled in the town square armed with  many AR-15s and assorted armaments to protect against alleged BLM/Antifa people who, of course, were never coming to Bedford since it is too far from their mothers' basements and their stashes of Hot Pockets.

Everything calmed down and I was in town yesterday and it was like nothing happened. Everyone went crazy for a day, but it appears to be over.

James Fulford writes: Once again, we can see why rural Pennsylvanians can't be blamed for clinging to guns.