A Nebraska Reader Reports That Interracial (I. E. Black) Violence At A Girls' Basketball Game In Nebraska Is Being Blamed On Trump 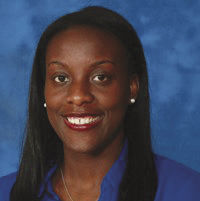 The Lincoln High coach (Dominique Kelley-Johnson, right) posted on Facebook that some Fremont fans came to the game wearing Trump gear and some (the horror!) stated that Trump was good for black employment.

It was one of the more hostile environments I’ve experienced with high school athletics and I saw several students wearing Trump 2020 shirts and hats. We had a grown man walk up to our players prior to the game and tell them, “Black and Latino unemployment rate is the lowest it's ever been." Guess what kind of hat he had on? Several of my players and student managers were distraught and balling [sic, perhaps she means "bawling"] by the altercation and so was I, because in that moment, I was stunned and I felt like I failed to protect them.

Neither the Lincoln Journal-Star article nor the coach's Facebook post directly states that a Trump supporter called a Lincoln High player a racial slur.

Guilt by association is enough.