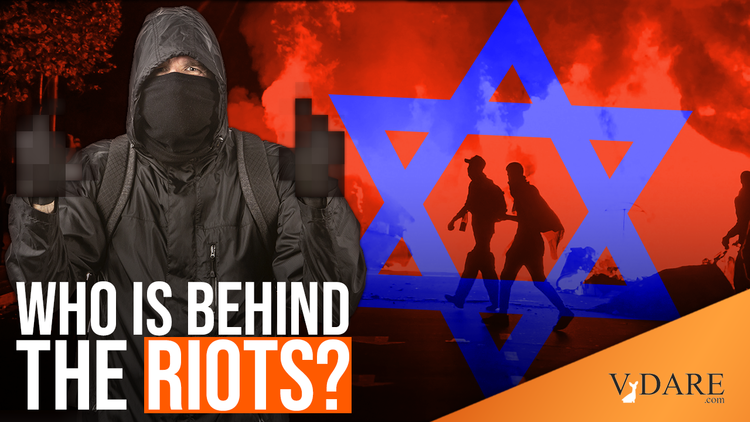 Re: Kevin MacDonald's Are These Antifa/ BLM Riots A Jewish Coup?

A Jewish VDARE.cam Reader [Email him]

I’ve been an avid reader of VDARE.com for some time and I am also Jewish.  I wanted to share a few thoughts on what I see is a blind spot in your posting Kevin MacDonald's views on Jews.

His argument that Jews act ethnocentrically against other groups ignores two major contradictions.

Firstly, most leftist Jews intermarry with non-Jews. We can call these Jews many things, but how can they be called ethnocentric?

Secondly, the religious and potentially ethnocentric Jews, who marry other Jews, also vote for Trump by high margins.

Orthodox religious Jews vote like religious European-American Christians.  In fact, the more religiously Jewish they are, the more likely they are to vote for Trump.  So Kevin’s view that Jews act enthocentrically against other groups doesn’t seem to hold up against data. [VDARE.com note: see here].

Anti-Semitism on the Left is rising and raising alarm bells.  It’s part of the Leftist ideology of deconstructing or valuing people based solely on their tribal group.  Along with anti-white bigotry, this is galvanizing conservatives and justifiably being condemned.  Let’s please keep the anti-Semitism and other group hatreds on the Left where they belong.  This will give Americans a clearer choice between one view and the other.

In my ideal world, our new, post-1960 elite—the elite that displaced the WASPs—would change direction and, like  "Jewish VDARE.com Reader," see that their true interests lie in allying with the traditional European-American majority of the US and use their power and influence to move in that direction. If they did, there would be a monumental shift in American politics and culture in the direction of promoting the legitimate interests of European-Americans.

Having said that, I think Jewish intermarriage and the political attitudes of Orthodox Jews are interesting topics but not important for understanding Jewish influence in the contemporary U.S. The important question: where the power lies and whether the activist Jewish community continues to have strong Jewish identification (whether or not they are intermarried) and how effective they are in pursuing what they see as Jewish interests. Jewish power and influence stem from organizations like the Anti-Defamation League, the wealthy donors to political movements, owners and producers of media, the Israel Lobby, elite academics, etc.

I have written about these activists in various places (e.g., here), and there is no doubt in my mind that they have strong Jewish identifications and see Jewish interests as being on the Left in the American political context. (This includes neoconservatives, whose main interest is Israel but have acted to push the Republican Party to the Left on issues like immigration.) And yes, they have been very effective in advancing these perceived interests.

We are in a life-and-death struggle for the future and the very least we can do is to be honest about power and influence in America. The fact is that honest, fact-based discussions of the interests, attitudes, and ethnic composition of the American elite—common in the 1950s as WASP power was coming to an end—are vanishingly rare.