From: An Anonymous Tech Worker [Email him]

This is the result of business logic that prioritizes moving all possible software work offshore and replacing local employees with visa holders. It is the spirit of the era and has been for several decades.

The offshoring strategy has been followed even when highly competent US based teams were already in place. I watched a company that produced embedded microprocessor based components go from no defects during test to defect-ridden junk during test after their move of development overseas. The company fired wave after wave of fully competent US employees in favor of overseas work. This process is of irreparable harm to US domestic interests and is ongoing.

Offshoring generally has been preceded by the rampant training of foreign nationals in the US via various visa mechanisms. Train here, then move the work there. Visa employees at Universities are indentured servants whose low wages drive out the native born from educational opportunities.

Of course, some foreign nationals have contributed mightily to our society. Anyone can see that. I often feel more in tune with first generation immigrants than with the native born. I have had epic experiences with Chinese math and CS profs with strong accents. I've also met foreign programmers with utter contempt for US Americans. Takes all types to make a world. 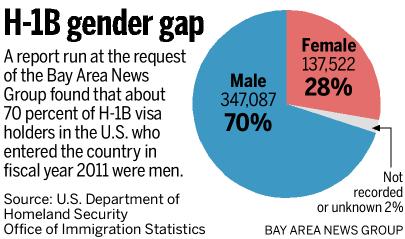 I have no sense of connection with useless members of the commentariat who support immigration as a way to ridicule, harm, and overwhelm our society. I worked at a company that taught an unrestricted litany of nonsense specifically against white, Protestant, males while overwhelmingly hiring foreign programmers, even when local graduates were available. Their attempts to bias me against myself and thus in favor of a foreign workforce never worked.

The question is who-whom. As an example, there are current valid concerns regarding women in programming jobs. There were many women in CS classes when I trained during the 1980's. There were also many job opportunities. Why would any intelligent woman want to be a programmer in the US now, when she knows that the business plan involves replacing her, either through offshoring or training her H-1B replacement? Not to mention all those men from misogynistic cultures at work. Perhaps the unequal gender ratio is partially a result of overwhelmingly male H-1B employees.

News is that Mr. Trump wishes to flood money into CS training. It's hard to see how this will help the US, as our real leaders in the business world are indifferent to national concerns, as exemplified by the two-pronged business strategy described above.

A last remark. Do learn to write and use software for your own use. It's a lot better than training your H-1B replacement to write code for somebody else.