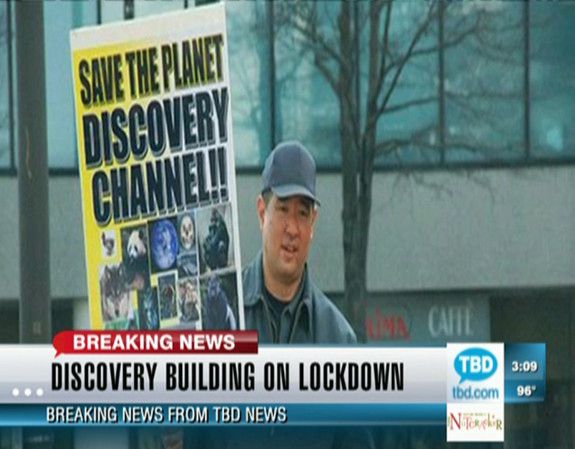 Despite hysteria from the Department of Homeland Security and left wing groups, inconveniently few right-wing terrorists or anti-immigrant hate criminals have ever materialized—especially when compared to the constant outbreaks of Immigrant Mass Murder Syndrome.

Which is no doubt why these groups and their MSM allies seized on James Jay Lee, the crazed loner who on September 1 held the Silver Spring, MD Discovery Channel building hostage for four hours before being killed by the police. (Fortunately, no hostages were harmed.)

Spinning the Lee incident against patriotic immigration reform is implausible on its face, of course, because that Lee surname comes not from the First Family of Virginia but from Korea. (I have not found anything definitive on the Lee family's immigration history, but Lee did have his own history with immigrants. The San Diego Union Tribune has just reported:

"Records in U.S. District Court in San Diego show that a James Jae Lee was sentenced in August 2003 to 18 months in federal prison for trying to smuggle an illegal immigrant in a hidden compartment in a car through the San Ysidro Port of Entry."

Lee was unquestionably a rabid environmentalist, who was apparently influenced by Al Gore's An Inconvenient Truth. He tried to organize protests outside the Discovery Channel building over a number of years, including throwing money into the street to garner attention resulting in a disorderly conduct arrest.

So how was this spun into an attack on immigration patriots?

Shortly before his death, Lee released a manifesto of demands that he wanted the Discovery Channel to air. He listed a number of demands related to the environment, the economy, and war. Plank # 5 (unedited here) dealt with the environmental cost of immigration:

"Immigration: Programs must be developed to find solutions to stopping ALL immigration pollution and the anchor baby filth that follows that. Find solutions to stopping it. Call for people in the world to develop solutions to stop it completely and permanently. Find solutions FOR these countries so they stop sending their breeding populations to the US and the world to seek jobs and therefore breed more unwanted pollution babies. FIND SOLUTIONS FOR THEM TO STOP THEIR HUMAN GROWTH AND THE EXPORTATION OF THAT DISGUSTING FILTH! (The first world is feeding the population growth of the Third World and those human families are going to where the food is! They must stop procreating new humans looking for nonexistant jobs!)"

Lee was not "demonizing immigrants". He used this language to describe everyone, regardless of national origin. He wrote: "Humans are the most destructive, filthy, pollutive creatures" And he demanded "stopping the human race from breeding any more disgusting human babies." [Save the Planet Protest]

Let's put it this way: Lee was a misanthrope.

But Lee's fleeting mention of immigration was perfect for the Open Borders Left, which has recently launched a major assault against patriotic environmentalists opposed to mass immigration.

Earlier in the summer, July 20, The Southern Poverty Law Center ($PLC to VDARE.COM) released a report "Greenwash: Nativists, Environmentalism and the Hypocrisy of Hate".

By an amazing coincidence, the very next day the Center for a New Community released its report Apply the Brakes: Anti-immigrant Co-optation of the Environmental Movement, [PDF]a special issue of its magazine Imagine 2050 on "Race, Migration, & The Environment". It is currently promoting a pledge to "stop the greening of bigotry" by saying "NO to the greening of hate and a resounding YES to the building of a democratic and diverse environmental movement." [Stop the Greening of Bigotry, Center for New Community]

Even more amazing, The Nation magazine simultaneously (July 29) ran a piece entitled Greenwashing Nativism by Andrew Ross—who, oddly, did not mention either report.

You can imagine the content: all environmentalists opposed to immigration are really the puppets of the racist eugenicist John Tanton, blah blah. Yawn.

But beyond this tired guilt-by-association rhetoric, there was a systematic effort to suppress patriotic environmentalists. Imagine 2050 demanded that "The National Council for Science and the Environment Should Dump Roy Beck" of NumbersUSA for the sin of allowing him to speak at their conference. It provided the phone number and e-mail for the NCSE's leadership so their readers could harass them and demand that Beck be permanently purged. Its article was accompanied with a picture of Beck and a protester with a balloon summarizing their totalitarian tactics "Don't Debate Hate." [Race, Migration, and the Environment, Imagine 2050, July 2010 (pdf)]

Days after this coordinated campaign began, Progressives for Immigration Reform's Leah Durant was purged as a blogger for the Huffington Post.

"But unlike earlier eco-terrorists like Unabomber Ted Kaczynski, Lee zeroed in on immigrants as a primary evil. He spoke of 'anchor baby filth,' a reference to babies born in the United States to undocumented immigrants…

"The argument that immigration fuels environmental degradation has become increasingly popular in nativist circles. In late July, in fact, the Southern Poverty Law Center released a special report — 'Greenwash: Nativists, Environmentalism & the Hypocrisy of Hate' — that detailed how right-wing immigration restrictionists were attempting to appeal to environmentalists to join their battle. The report suggested that most of those making such appeals were disingenuous about their interest in the environment, and were merely cynically seeking allies."

Potok did concede "That doesn't seem to be the case with Lee, who seems to have started out as an environmentalist, but one who became more and more extreme." But apparently he just knows that's not true for those evil "right-wing immigration restrictionists".) [Apparent Eco-Terrorist Holding Hostages at TV Building, by Mark Potok, Hate Watch, September 1, 2010]

Actually, the SPLC's Potok showed relative restraint in comparison to other left wing groups. Imagine 2050's Jill Garvey said Lee's attack indicates "an alarming re-emergence of racially-tinged population control arguments." Garvey could not conceal her glee in using the incident to promote its propaganda, actually writing there was a "silver lining" to the attack because it happened to coincide with Imagine 2050's "pledge that acknowledges that immigrants and refugees are also spearheading movements for ecological and economic renewal, and are allies rather than adversaries in the fight for environmental sustainability." [Population Control Alarmist Attacks Discovery Channel Headquarters, Jill Garvey, Imagine 2050, September 1, 2010]

And Colorlines' Julianne Hing made no qualifications: she putting the blame solely on immigration patriots who turned Lee's "activism into hate". She portrayed Lee as a thoughtful environmentalist who "wanted the best for the ailing planet" but was tricked into hatred. After gushing over the rest of his manifesto, Hing lamented:

"Lee's legitimate fears about the environment had been clouded in part by xenophobia. And not on accident, either. The gunman's deranged demands brought to the fore tenets of a growing sector of the environmental movement that's been co-opted by white nationalists and immigration restrictionists with extensive ties to anti-immigrant networks like the American Immigration Control Foundation, Californians for Population Stabilization, the Federation for American Immigration Reform (also known as FAIR) and its various offshoots like NumbersUSA and the Center for Immigration Studies…Lee seemed to have bought their lies." [How the Discovery Channel Gunman's Green Activism Turned to Hate, Julianne Hing, Color Lines, September 2, 2010]

Think Progress, a blog for the left-wing think tank the Center for American Progress, weighed in on eerily similar lines:

"Lee's immigration screed bears a troubling resemblance to views and policies espoused by anti-immigrant groups such as Numbers USA, the Center for Immigration Studies (CIS), the Federation for American Immigration Reform (FAIR), Progressives for Immigration Reform, and others. Just this past month, FAIR released 'The Environmentalist's Guide to a Sensible Immigration Policy.' The report connects immigration to 'pollution, sprawl, congestion, and ecological degradation,' complaining that 'so-called environmentalists pretend as if this connection does not exist.' As usual, FAIR prescribes an overall reduction in immigration as the solution to the country's environmental woes (in slightly more diplomatic terms).

"It's not a coincidence that many of these are amongst the same groups that have always supported changing the 14th amendment to deny 'anchor babies,' or the American-born children of undocumented immigrants, citizenship — long before the debate entered the political mainstream this summer." [Purported Eco-Terrorist Angered Over 'Immigration Pollution And Anchor Baby Filth', Andrea Nill, Think Progress, September 1, 2010]

No matter how hard they try to spin it, trying to portray an Al Gore-loving, illegal alien-smuggling Korean as a nativist hate criminal will be a tough sell. I don't anticipate this meme really harming patriotic immigration reform.

But these attacks should not be dismissed. After all, the MSM recently span black mass murderer Omar Thornton into a victim of "racism" apparently quite spontaneously. And the organizations are well funded and closely tied to the federal government.

The SPLC is recommended by FBI to local law enforcement as a resource for "hate crimes" training. According to the FBI's website, Civil Rights division has forged a partnership with the SPLC "to establish rapport, share information, address concerns, and cooperate in solving problems." [Hate Crime-Overview, FBI Civil Rights Division]

These left wing non-profits are enforcers for the Obama administration—without any of the oversight and regulation required for government agencies.

The fact that these groups will go to such lengths to try to smear and suppress even the most Politically Correct patriotic immigration reformers, like the herbivorous Roy Beck and Progressives for Immigration Reform's Leah Durant who is actually black, reveals the intensity of their totalitarian agenda.