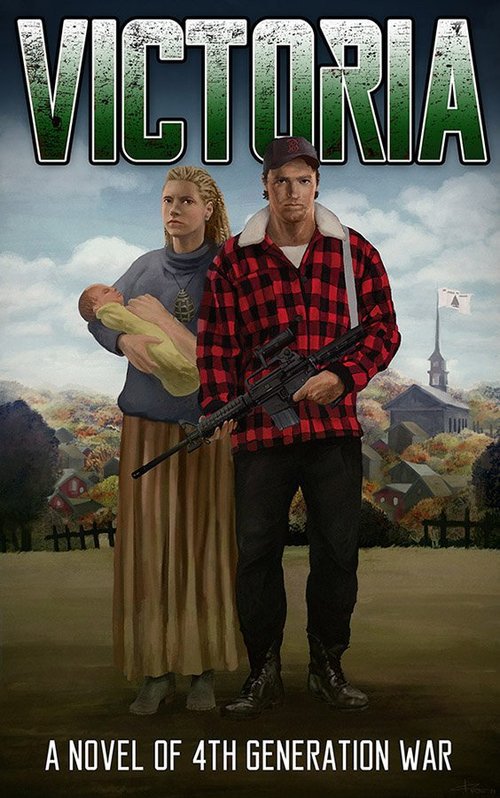 William S. Lind is a man of many talents. He’s an institution of the American conservative movement, formerly the Director of the Center for Cultural Conservatism of the Free Congress Foundation (under the late Paul Weyrich), a regular contributor to The American Conservative, and a noted military theorist. And now, with the publication of Victoria he is a novelist, putting forward a highly readable vision of the breakup of the United States and a traditionalist restoration. It’s a sign of the times that we can no longer regard such a story as implausible.

Victoria is subtitled “A Novel of Fourth Generation Warfare,” and Lind’s writings on warfare bleed (perhaps too much) into his storytelling. His theory of Fourth Generation Warfare contends that warfare has ceased between states with standing armies and operative governments. Instead, it is decentralized, on at least one side, lacking a regular command structure and no longer identified with an established state or regular army. Countries like the U.S. find themselves in partisan struggles around the world that violate the “rules of war” built up under the old European state system.

Bill’s ideas about changing forms of warfare may have been influenced by the German political-legal theorist Carl Schmitt, who wrote on partisan warfare after the Second World War. His novel is written under the nom de plume “Thomas Hobbes,” so even in this he reveals his connection to Schmitt, as the German jurist profoundly admired the seventeenth-century Englishman who wrote about the rise of the state [The Leviathan in the State Theory of Thomas Hobbes, by Carl Schmitt] (I wrote an intellectual biography of Schmitt and also deeply respect the philosopher who wished to protect us against “the war of all against all.”)

In Victoria, all Hell breaks loose in a way that Hobbes might have understood. Yet it is only the Time of Tribulations before the golden age of social restoration that ends the novel. Indeed, we are told the ending in advance in the opening scene when we learn “The triumph of the Recovery was marked most clearly by the burning of the Episcopal bishop of Maine.”

The feminist prelate who was incinerated had placed a statue of the Egyptian goddess Isis on the altar of her church, and her grisly execution was the beginning of rebellion against the central government in Washington, resulting in an independent state of Maine.

This Northeastern outpost of “retroculture” eventually builds a coalition, the Northern Confederation, which fights off an invasion by federal forces and hostile multiculturalists. The novel doesn’t disappoint in its depictions of gory details, from Christians of all races crucified by invading Muslims on Boston Common to the revenge of patriots on Leftist tyrannies as the Confederation’s victories mount. The predictable baddies would represent a kind of rogues’ gallery for VDARE.com readers.

In fact, Lind never misses his target when he describes his particular enemies, who are exactly what you would expect: Jewish liberals, brain-dead WASP patricians, loud-mouthed feminists, homosexual activists, the Open Borders lobby, and anti-White racial minorities. Most get their comeuppance, many at the hands of the forces under the command of the novel’s hero, Captain John Rumford, formerly of the USMC.

Interestingly, the Southern Confederation, which starts out as a pro-Confederate secessionist movement, falls under the control of Yuppified Southerners and Northern transplants as soon as it succeeds in establishing its independence.

But our heroes are aided by European conservative allies, such as Russian and German monarchists, who send what they can to the American Right in its battle against the godless American central state. The Left is meanwhile assisted by the UN, which provides whatever aid it can to the American multicultural forces. Thus Lind’s imaginary confrontation seems to be taken from the situation in the Spanish Civil War, when the Left and Right outside Spain took sides on the basis of ideological predisposition. Here too the struggle between Left and Right quickly assumes an international dimension.

A scene near the conclusion features Christian churches joining together to declare a crusade against the Islamic peril, possibly an ode to the flamboyant play of the French nationalist and conservative Catholic Paul Claudel, Le Soulier de Satin. At the end of the Claudel’s play, church bells in seventeenth-century Spain are pealing in recognition of the victory of Christian Europe against the Turks in the sea battle of Lepanto (1571). The Don John of Austria at Lepanto is replaced here by the former jarhead Rumford, a kind of modern crusader who leads a religiously sanctioned struggle against the new Muslim enemy of Christian Europe.

Perhaps as a sop to WASPs, Victoria ends with a tribute to “England’s longest reigning monarch, Good Queen Victoria.” A return to Victoria’s age and culture had become part of the “new Zeitgeist.” “The Frankfurt School was history, and with its game out in the open, no one fell for it any more, not even academics.”

Of course, in an earlier scene that is my favorite moment in the novel, all the participants at a gathering of Leftist professors at Dartmouth have been summarily shot dead.

Here I must point out one disagreement with Lind. We have strenuously debated the question of whether the social Leftism often termed “Cultural Marxism” is truly derived from a Marxist or Marxist Leninist worldview. Put quite simply: Bill thinks it is; I don’t.

Related to this dispute is the question of where exactly this body of ideas and social prescriptions comes from. As you can see in the novel, Lind sees them mostly as the product of the Institute for Social Research, a think-tank that was founded in interwar Frankfurt by mostly Jewish, self-described Marxists. In contrast, I stress the acquired American identity of the “Cultural Marxists.”

Perhaps Lind considers it unpatriotic on my part to see something that both of us deem obnoxious as being part of an American political legacy. Yet when I see James Kirchick, John Podhoretz and others I’d characterize as neoconservatives tell us that gay marriage has become integral to Western identity, and, furthermore, that we must fight Vladimir Putin as an enemy of the “Western” tradition of gay rights, they are not really echoing German refugees of the 1930s. They are sounding fashionably American. The Frankfurt School, never to my knowledge, advocated “gay marriage” or countries with virtually open borders. American political and media elites borrowed selectively European antifascist ideas and then transformed them into an expanded concept of American pluralistic democracy.

Moreover, unlike the original Cultural Marxists, their American successors are not socialists. They are friends of Wall Street and multinational corporations who have turned a now mainstreamed cultural radicalism into an American imperial mission. Hillary Clinton runs to do favors for big business in return for payoffs, while proclaiming in that Christian churches that do not accept gay marriage will have to be forced to change their “religious beliefs.” [Hillary Clinton: ‘Religious beliefs’ against abortion ‘have to be changed’, by Ben Johnson, LifeSiteNews, April 24, 2015]

But is Lind’s larger scenario that implausible? It is a reasonable assumption that we could see a major collapse of the system. After all, our centralized state is highly pressured by government bureaucrats, aggrieved minorities and swarms of illegals. In Lind’s novel, as soon as the central administration in Washington ceases to keep order, various centrifugal forces surface and assert themselves.

But in Victoria, the regular armed forces are overwhelmed by the operation of Bill’s “Fourth-Generation Warfare” and soldiers from all over the place eagerly defect. In the real America, the military would pound the rebels into oblivion and Fox and MSNBC would explain how we had averted a racist, anti-Semitic, homophobic takeover.

However, if there were indeed a crisis, we could see secessionists or decentralists move toward a gradual, inconspicuous transfer of power. That would have to occur behind the scenes without risking a military confrontation between dramatically uneven sides.

And history has a way of moving more quickly than people expect—something Lind clearly understands. At the beginning of the novel, Rumford and the other protagonists express loyalty to the Union, but only fifty pages later they are working to dissolve it. Not so absurd when one remembers that as late as Christmas, 1775, George Washington was toasting the English monarch. Not long after he’d be leading armed forces against His Majesty’s Government.

Because it brings such parallels to mind, Victoria, like most everything by William S. Lind, is well worth the read.