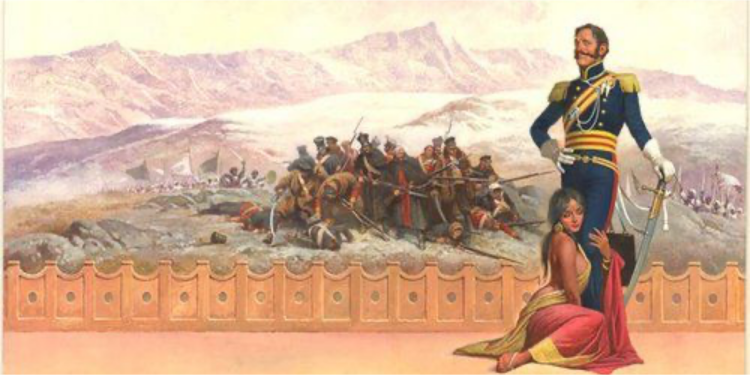 Will America Take Up The New White Man's Burden?

There was been notable unease in some quarters about Cambridge (U.K.) historian Professor Niall Ferguson's Empire: The Rise and Decline of the British World Order and the Lessons for Global Power. In an early review, Publisher's Weekly predicted that this "provocative" book would "surely trigger debate, if not downright vilification." 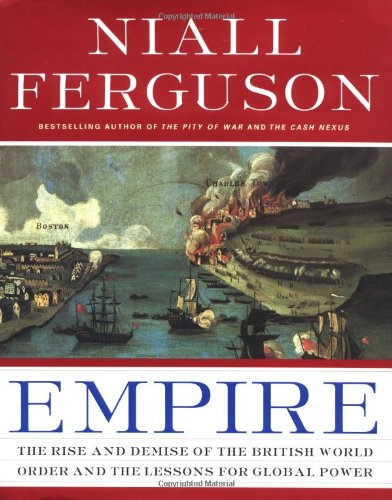 PW got it wrong. The Washington Post praised the very thing that worried PW, saying the book "brilliantly challenges the simplistic focus on racism, violence and exploitation." The Economist, which is just as skittish as the Post about "racism," said Empire is "a model of how to do popular history." Even the New York Times seemed to be reevaluating empire in the light of current US adventures abroad. In April, it opened the Sunday magazine  to Professor Ferguson for a piece urging Americans towards benevolent imperialism.

At its peak in 1918, the British ruled one quarter of the earth's surface and 440 million subjects. Theirs was, by far, the greatest empire the world has ever seen, and it captured the energies and imaginations of generations of Britons. Professor Ferguson's history of the imperial adventure is admirably clear and engaging. He has struck just the right balance between politics and economics on the one hand, and swashbuckling exploit and piquant detail on the other. (Lord Kitchener the military hero, for example, was such a bad shot he named his gun dogs Bang, Miss, and Damn).

This is the perfect volume with which to tie down those free-floating bits of British history Americans can't quite place: Who was in the black hole of Calcutta and why? Did the British really execute an admiral so as to, as Voltaire put it, "encourager les autres." Who were the fuzzy wuzzies? Was the sepoy rebellion really about animal fat? It's all here, deftly explained and supported by a wealth of illuminating illustrations.

But Professor Ferguson wants to do more than tell a good story. He wants to ask big questions: Was the empire a good thing? How did the British manage to rule the world? Is America the next imperial power?

He is refreshingly free of anti-imperial prejudice, and answers the first question with a thumping "yes." "No organization has done more to impose Western norms of law, order and government around the world," he writes, adding that the British brought free trade, investor protection, and a colonial civil service that was virtually incorruptible. It is a pleasure to read a Brit who does not apologize for his ancestors.

But the fact remains that Ferguson has gotten away with praising empire, not merely because the idea is now convenient to the American ruling class, but in large part because he resoundingly condemns the sentiments that made empire possible. He cannot conceal his admiration for conquest, but frets about what drove the conquerors.

Alfred Milner, a colonial administrator and later a Viscount, spoke for many:

"My patriotism knows no geographical but only racial limits. I am an imperialist and not a Little Englander because I am a British race Patriot. It is not the soil of England . . . which is essential to arouse my patriotism, but the speech, the traditions, the spiritual heritage, the principles, the aspirations, of the British race . . . ."

Cecil Rhodes, who wanted the flag flying from Cape Town to Cairo, was even blunter: "We are the first race in the world, and the more of the world we inhabit, the better it is for the human race."

Professor Ferguson is embarrassed by this sort of talk. But without it there would have been no empire.

The dilemma for half-way imperialists like him is neatly captured in what came to be known as the "white mutiny." In 1880 the Marquess of Ripon was appointed viceroy of India, and arrived full of the progressive ideas then circulating in London. He found that Indian magistrates could not preside over criminal trials of British defendants: only a white man could pass judgment on another white man. This offended Ripon, who decreed equal competence of magistrates without regard to race.

Old India hands, some of whom had served for generations, were outraged. They refused to give up an essential distinction between rulers and ruled. Their resistance was so determined and bitter that the question raised a storm even back in England. The result was compromise: Indians would judge whites, but only before a jury composed of a majority of whites (Americans could serve, too).

The entire debate was an unnecessary mistake. Ripon's blundering liberalism forced the British to make explicitly racial arguments about the necessity of maintaining the color line. A custom of long standing, quietly taken for granted, became a grievance for natives only after it was held up to the light and defended in frankly imperial terms. "Quite unintentionally," writes Professor Ferguson, "Ripon had brought into being a genuine Indian national consciousness."

And yet he takes Ripon's side! He does not seem to understand that dominion is, by its very nature, the practice of inequality. One cannot both admire empire and deplore the methods it requires.

The "white mutiny" was part of a pattern. The authorities in London - naïve and far from the scene - increasingly tried to peddle liberal notions to people whose livelihoods and even lives depended on the unsentimental enforcement of inequality. Whether it was stern repression of black insurrection, or protecting Hindus and their unsavory customs from meddling missionaries, the men on the ground were invariably more hard-headed than the ones back home.

As Thomas Munro, governor of Madras, wrote in 1813:

"I have no faith in the modern doctrine of the improvement of the Hindus, or of any other people. When I read, as I sometimes do, of a measure by which a large province has been suddenly improved, or a race of semi-barbarians civilized almost to Quakerdom, I throw away the book."

Empire was doomed, of course, when the Ripons began to outnumber the Munros and the Milners. The British lost their conviction of superiority, and therefore their ability to act firmly.

Adolph Hitler, rather more a Rhodes than a Ripon, once explained to then-Foreign Secretary Lord Halifax, that the way to put down the Indian independence movement was to shoot Gandhi, and if that didn't work, to  keep shooting activists until the movement died out.

The British did not shoot Gandhi, and India was independent a few years later. Perhaps Lady Mountbatten's affair with Nehru is the best symbol of the change in mentality from "rule Britannia" to today's limp-wristed "cool Britannia." No true daughter of empire would have dreamed of having it off with a native just as her husband, the final viceroy, was handing over the jewel in the imperial crown.

It is true, as Professor Ferguson points out, that Britain had been drained economically by two world wars, was more interested in paying for a welfare state than for a colonial army, and dared not defy the anti-imperial United States. Still, the end of empire was a failure of will, a psychological capitulation, more than anything else.

It is the same failure of will that now offers up Britain as a target of colonization for millions of Indians, Pakistanis, and West Indians. The empire, based as it was on British superiority, kept the subject peoples literally in their places. Now, after it is gone, they are streaming in, shaking the country to its foundations. This is the sorry fag end of empire on which Professor Ferguson is silent: the British, who carried their flag around the world, cannot now summon the will even to keep the home islands British - an outright reversal of imperialist thinking that this book does not even begin to explore.

And will the United States take up the white man's burden? None dares call it that, of course, but Professor Ferguson suggests that is what it amounts to. Professor Ferguson argues that there are still weak nations that need guidance and standards that must be imposed, and that the Yanks are perfect for the job.

Of course, the United States is even more of a colony of the world than is Britain. Whatever attempts at empire it undertakes will increasingly reflect the desires of whichever interest group has its hands on the levers of power.

With their combination of hucksterism, idealism, and naïveté, Americans are not cut from imperial cloth, and if it leads to the mental collapse from which the British now suffer, we must avoid it at all costs.