"Why should there be one standard for one country [Iraq], especially because it is black, and another one for another country, Israel, that is white?"

The Nobel Laureate went on,

"In fact, many people say quietly, but they don't have the courage to stand up and say publicly, that when there were white Secretary Generals you didn't find this question of the United States and Britain going out of the United Nations. But now that you've had black Secretary Generals like Boutros Boutros-Ghali, like Kofi Annan, they do not respect the United Nations. They have contempt for it. This is not my view, but that is what is being said by many people."

In reality, of course, the Egyptian Boutros-Ghali and the people of Iraq are about as black as Al Pacino.

"Mandela's statement reflect a Manichean division of the world between white and non-white, oppressor and oppressed, that simply doesn't reflect reality anymore," commented  the pseudonymous "Razib," one of the consortium of mostly South and East Asian young bloggers at Gene Expression, a human biodiversity realist website.

Razib, who was born in Bangladesh and raised in Oregon, has brown skin, straight black hair and (what to my eye are) Caucasian features. He went on to make an intriguing point,

"The irony is that Left-wing identity politics and small-town ignorance converge, as both groups often downplay differences between 'people of color.' I know of this from personal experience, since in eastern Oregon people would often refer to me as 'colored' or 'black' because of my dark skin… Things like this might not seem like a big deal, but before we can deal with our differences, we need to be clear and rigorous as can be as to what they are. Obscuring the issues only put off the eventual reckonings...."

Despite all the talk about celebrating diversity, nobody these days is supposed to notice diversity. There is almost no way for the public to look up in a modern reference work what people of various geographic origins look like. There is a natural human curiosity about what people from around the globe look like. Yet organized ways to study this fascinating subject have largely been shut down. This important knowledge has become something you just have to pick up as you go through life.

Personally, I've become pretty discerning due to thirty years of girl-watching. For example, I've observed so many waitresses in both Thai and Vietnamese restaurants that by now I can tell Thais and Vietnamese apart.

Many prominent scientists today, however, are far more ignorant about human biodiversity that their predecessors were. That's not how science should work — knowledge is supposed to accumulate, not dissipate.

I recently spent a couple of hours discussing race with two very famous evolutionary psychologists who have written a number of often-quoted articles on how evolution has nothing to do with race. (This would have come as a huge surprise to Charles Darwin, who entitled his most famous book: On the Origin of Species by Means of Natural Selection, Or the Preservation of Favoured Races in the Struggle for Life, and who devoted about half his second most important book, The Descent of Man, to a theory of the evolutionary causes of racial variation.)

I'd always assumed that their pooh-poohing the relationship between Darwinism and race was a calculated effort to keep their politically incorrect studies of sex differences from getting them thrown off campus. That's not terribly brave, but it's certainly prudent. I could hardly criticize them for it.

But I found they weren't being Machiavellian. They were simply ignorant of the basic knowledge that you'd expect in anybody who pronounced judgment so confidently on the topic of race. They didn't seem to know anything at all about physical anthropology. They were surprised, for example, to learn that the Indians of the Andean highlands, where the air is thin, had evolved bigger chests and bigger lungs than the Indians of the Amazonian jungle. They had weird Lamarckian- Boasian ideas to explain human biodiversity—such as that if an English child were raised in East Africa, he'd grow up with longer, thinner limbs like a Kenyan.

They had clearly never discussed human physical variation with anybody who knew anything about it.

I was embarrassed for them.

In the past, there were resources to educate Americans on what the rest of humanity looked like. Right now, I'm looking at my copy of Evolution, the 1962 Time-Life Book that I read as a child. It has a chapter called "Man and His Genes." It includes three pages devoted to pictures of representatives from 23 different racial groups.

Similarly, the great physical anthropologist Carleton Coon's 1965 Living Races of Man has 128 pages of portraits organized by racial groups, several of them near-masterpieces of photo portraiture. His picture of a bare-chested Samoan chieftain reflects as much innate dignity and sense of command as the best photos of FDR. (If you know of a more recent photo book, please tell me.)

America's most spectacular trove of human biodiversity depictions is badly abused today. One of the most impressive American female artists remains in obscurity, in an age which dredges up forgotten women artists as role models, because of her sins against racial correctness. 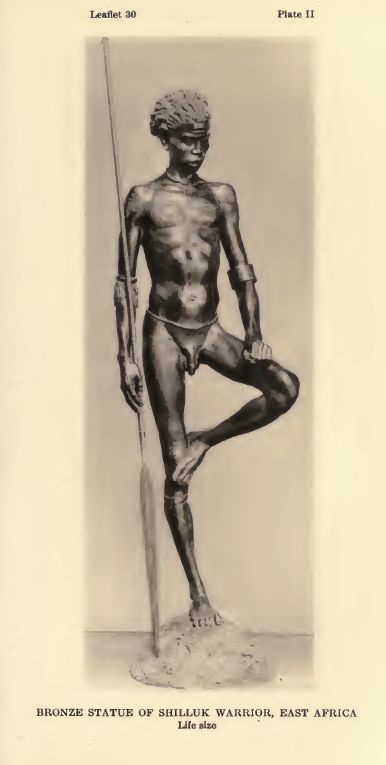 Malvina Hoffman has been called "the greatest American artist you've never heard of" and "the American Rodin." She studied under Auguste Rodin, the greatest sculptor since Bernini, and Gutzon Borglum, creator of Mt. Rushmore. Her style was more realistic than Rodin's, which helped drive her out of fashion in a 20th Century art world obsessed with abstraction.

In 1930, the Field Museum of Natural History in Chicago commissioned her to create 91 full size bronzes and 13 marbles depicting in exquisite detail the "The Races of Mankind." She traveled the world to complete this most titanic sculptural project undertaken by any American woman ever. (Here's her Bushman woman and baby.)

In 1933, the Hoffman exhibit opened in the Field Museum's spectacular custom-built "Hall of Man." It was a major part of the Chicago World's Fair and remained a popular institution for decades afterwards. But it was shut down in 1968 because, well, because it was 1968.

Hoffman's collection was broken up. A  quarter of it is now in Cedar Rapids. When I last visited the Field Museum in 1999, only about half the statues were on display, and many of those were pushed into dark corners, often without labels. The magnificent 6'8" Nilotic Nuer warrior, with proportional masculine endowment, was down in the basement next to the dusty souvenir-making Mold-o-Vac and Penny Squeezer machines.

I asked a curator about this neglect. She told me the sculptures deserved to be treated with disdain because they weren't realistic. [Contact the Field Museum here]

But Ms. Hoffman published photos of many of her subjects in her autobiography. The only thing unrealistic about them is that Hoffman, Rodin's pupil, no doubt made them all a little healthier, handsomer, and more heroic looking. Is that so bad?

The real reason her great accomplishment is treated with disdain is that it vividly and memorably demonstrates human biodiversity.

And that's what the museum's social anthropologists fear and loathe.