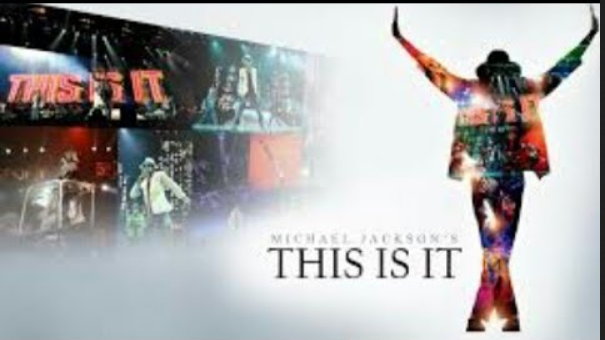 I give an unqualified one thumb up to Michael Jackson's box office smash, This Is It. The film is a collection of rehearsals taped in preparation for Jackson's comeback tour of 50 sold-out live London performances that never took place.

Readers may be conflicted, as I originally was, about whether to see the tribute to the controversial and troubled Jackson.

Jackson's fans couldn't care less about anything except his music. Non-fans won buy a ticket no matter what.

If you miss it, that's too bad because This Is It is a great show.

Anyone hoping for insights into Jackson's personal demons will be disappointed.

But if viewers stay focused on Jackson's talent, then they will come away with a renewed appreciation for his musical gifts. You will be surprised at how healthy Jackson looks which explains why so many close to him were shocked at his death.

I'm of the age where I remember the Jackson 5 as smash hits on the original Detroit Motown label that was often referred to as Hitsville, U.S.A.

Within a few months after the Jackson 5's 1964 discovery, Diana Ross and Berry Gordy took the group under their wing, moved it to Beverly Hills and launched a new era in pop music.

In 1985, Jackson left the group to begin his solo career. His brothers eventually disbanded as each of them went on their own.

For more than twenty years, Jackson was the biggest thing in pop. While selling billions of records worldwide, Jackson won 13 Grammy Awards and had 17 number one singles.

As you watch the movie, you won't have any trouble understanding why.

Within the film's two hour framework, there are 15 full song performances in all including great versions of "Smooth Criminal," "Man in the Mirror," "Beat It," "Billie Jean," and "I'll Be There."

The highlight of all Jackson's well known song book is Thriller, produced in the movie with 3-D effects added.

In between Jackson's songs, we watch short interviews with Michael's retinue of dancers, his band members and back-up singers, all of whom wax poetic about how professionally satisfying it is to work with the King of Pop and how lucky they consider themselves.

Although you would expect them to be laudatory, they seem to sincerely respect and love Jackson. One reason is that Jackson allows his support player to have their moments.

On a duet with ingénue Judith Hill, Jackson challenges her to sing with more soul. And he urges Australian guitarist Orianthi Panagaris to take advantage of her solo moments on stage that he believes will be her springboard to a long, successful career.

Toward the end of the movie and just before a powerful rendition of The Man in the Mirror, Jackson in one of his many personal demonstrations of affection thanks his family by name: "Jackie, Jermaine, Marlon, Tito, Randy ...."

Then, remembering his mother, Jackson adds, "I should also say Katherine. I love you."

"It is the single most brilliant piece of filmmaking I have ever seen. It cements forever Michael's genius in every aspect of creativity. I truly believe this film should be nominated in every category conceivable."

Taylor's review may be slightly over the top—but not much.

I realize that many readers are understandably skeptical, possibly even revolted, at the idea of watching Jackson for two hours. I know that I was.

Nevertheless, I recommend that you put those sentiments aside and go.

If it helps you justify buying a ticket, consider This Is It as a documentary that explores the career of the most influential musical performer of this or possibly any other era.